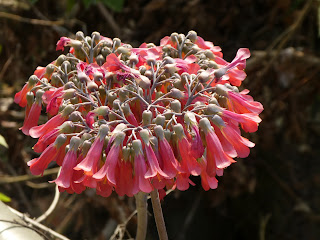 Not the usual flowers I expect to see on a Chinese New Year hike! 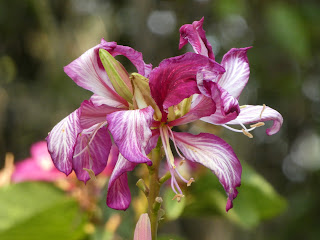 Bauhinia in bloom in mid-February! 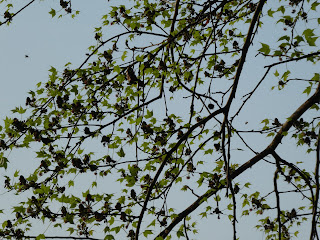 So were a bunch of smaller and less colorful flowers
that attracted a scary amount of bees!
Since moving to Hong Kong, it's become a tradition of sorts for me to go hiking with friends on the first day of Chinese New Year.  And there have been occasions when, seemingly on cue, I'd catch sight of the bell-shaped flora known as Chinese New Year flowers on one of these hikes.
On today's excursion, which saw a friend and I trek from Lady Maclehose Holiday Village over to Sai Sha Road (but this time via Yung Shue O rather than Kai Kung Shan), however, I got to thinking that my chances of seeing the flowers that I will readily admit to looking forward to spotting at this time of the year would be on the slim side since it had turned unseasonably warm in recent days.  And as it turned out, today's turned out to be the warmest day by far of 2018, with highs of 27.7 degrees Celsius registered over in Sha Tin and Twa Kwu Ling, and the temperature in Pak Tam Chung having hit the 27.5 degrees Celsius this afternoon!
I hope that my chance to make some Chinese New Year flower spottings this year aren't completely gone though; and I really can't believe that it'll stay this warm through to the whole Chinese New Year period (which traditionally goes on for 15 days!).  I also take some consolation at today's hike being far from flower-less.  Not only that but I actually came across some bright pink flowers that I had never seen before, or at least not in the state of blooming that they were in, along with some bauhinia that had a different coloring from what I'm used to seeing.
Other visual highlights from today's excursion included my coming across rock pools that, even while I know they are completely natural, look so attractive that it sometimes seemed like they had come out of a movie set designer's imagination.  And while I'm not normally tempted to jump into one, I must say that if the temperature had risen a few degrees further, I might have wanted to take advantage of there having been few other people out on the trail my friend and I went on this afternoon and letting myself be cooled by those waters!
All in all, today's was a pretty pleasant hike along what really did feel like the path less taken since my friend and I spotted fewer than eight other people on the sections of trail between the Lady Maclehose Holiday Camp and Yung Shue O.  Actually, to judge by what we observed in Sai Kung town and while catching the minibuses to, further into and out of the Sai Kung Peninsula, the first day of Chinese New Year may well be the quietest and thus most optimal day of the year to go hiking in this part of Hong Kong which normally attracts many hikers and lots of others wishing to enjoy the outdoors on their day out!
Posted by YTSL at 11:18 PM

flowers it been a good four months since any flowers were up in my yard.
Coffee is on

Oh wow re your having seen flowers growing in your yard for four months. Has there been lots of snow where you live this winter?