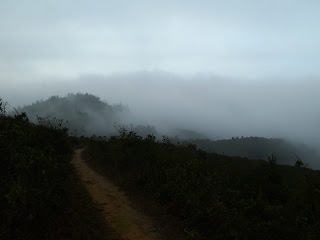 It sure was misty in the part of Lantau that
a friend and I went hiking in this afternoon! :S 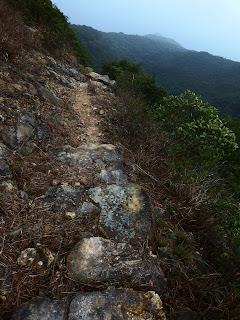 And during those few moments when visibility w
as higher, I often was too afraid to look over
to my side at what was far down below ;(
Shortly after the friend I went hiking with today and I got off the bus close by our chosen trail head for this afternoon, she felt some rain drops and I spotted their splashes on the ground.  Ironically, just yesterday, another friend had asked me whether I hike if it's rainy -- and I had told her that while such conditions certainly not ideal, I do indeed some times feel undeterred by a fair amount of precipitation and decide to venture into the great outdoors even at the risk of getting pretty wet!
As it so happens, to get to the particular hiking trail that we wanted to go along on the second day of Chinese New Year, my friend and I first had to walk for about 45 minutes along the fairly flat side of a catchwater -- and it only rained for the first half hour or so after we got off the bus.  So by the time we got to the end of the Keung Shan Country Trail that we had opted to start at, conditions were good enough that we decided to go ahead and venture along the 8.2 kilometer route (which, when coupled with the walk needed to get to it, probably ended up being close to 10 kilometers, maybe even 11).
When looking at my Countryside map for Lantau, it looked like the initial stretches of the Keung Shan Country Trail (leading up to marker C1302) would be the most difficult since it involved a pretty vertical ascent up a couple of hundred meters.  As it turned out though, while it's true that the climb did involve some huffing and puffing on my part, the hairiest sections of the trail for me turned out to be the sections that followed: which were on the side of high hills with lots of streams to cross, rocky sections to pass by and whole kilometers where there was a sheer drop on the immediate right side of the trail, just inches away (or sometimes less) from where I was stepping!
As I told the friend I was with midway through today's hike, I've a good mind to write to the people responsible for the Countryside maps and tell them that the section of the Keung Shan Country Trail between marker C1302 and C1307 that is shown as a solid line, denoting easy walking, really should be redrawn as a dotted line, denoting that the trail is difficult, even at times indistinct.  Granted that my fear of heights contributed to my feeling a need to "butt it" along the trickier bits but even my non-acrophobic friend uttered a loud "Oh my god" at one point in the hike upon coming across an intimidating rocky section where our path ahead was far less clear than we would have liked!
In retrospect, our nerves were further put on edge by the knowledge that in 2009, sections of the Keung Shan Country Trail had to be changed after major landslides pretty much destroyed portions of the original route.  And walking along that segment of the current trail that's literally on the side of mountains, I could very easily imagine how another major landslide could wash it away without much of a trace.
So it was quite the relief when the trail turned inland after C1307 and my only regret when we got to the scenic area known as Man Cheung Po which I had previously passed through when hiking the Lantau Trail's Stage 5 and 6 was that it was too misty to see all that far around.  (Incidentally, we noticed mist forming and rising pretty much around the time that the rains stopped but it fortunately never got too bad that we felt that our view of the trail ahead were terribly obscured by the mist.  Otherwise, we most certainly would have not pressed ahead along the pretty challenging Keung Shan Country Trail today!)
In contrast to the first two thirds or so of the trail, the last third was a breeze.  So, I told my friend, when we next venture to Man Cheung Po and its surroundings, we should do so from the entrance to -- or, in our case today, exit for -- the Keung Shan Country Trail that's closer to Tai O Road.  And if we then follow the section of the Lantau Trail that goes down from there to Tai O, we'll have a hike route that's considerably easier than the one we went on today, never mind the hike along the Lantau Trail that took me into this splendid -- yet seemingly often overlooked by hikers -- area of Hong Kong years ago!
Posted by YTSL at 11:47 PM

Do you know that was not the original route of Keung Shan Country Trail? It used to start at the very same point as Lantau Trail stage five (http://hiking.gov.hk/chi/pdf/longtrail/ltrail/lmap05.pdf). If you take a look at this, look for the dotted line east of the Stage 5 route.

That original route was closed owing to a sever land slip. What you have gone through was what's left of the Keung Shan Country Trail after the re-route. Some older maps still have to old route marked though.

So, you have gone up there starting at Shek Pik and walked along that long catch water? I have not walked this route yet. I have only walked passed the short section over-lapping section five of Lantau Trail.

According to some online photos, this route would be consider difficult on a hot day.

Yep, I do know that the route I went on has been changed. As I wrote in my post: "...in 2009, sections of the Keung Shan Country Trail had to be changed after major landslides pretty much destroyed portions of the original route."

I've got a 2006 edition "Hiking All in One" book with a map showing the original Keung Shan Country Trail route. The eastern section of it has vanished in my 2016 Lantau Countryside map bar for a short dotted line that's by no means the full length of what used to exist. Basically, you can see that the rerouting involves pretty much all of the route between markers C1307 and C1316.

And yes, I started at Shek Pik and walked along much of that long catchwater that's actually part of Lantau Trail Stage 8. Also, yes, I'd not advice on going on the Keung Shan Country Trail on a hot day! ;S

More than BTW, did you read about the hiker death in Lantau yesterday (January 30th)? I must admit that I did wonder when I saw the article headline if the man had plunged to his death on the Keung Shan Country Trail!

I read it on my phone while in MTR. That unfortunate hiker was up somewhere in below Lantau Peak. According to the news, that is a cliff along the Fung Bik Stream. That was below Lantau Peak but seemed to be above and along the treacherous Kau Nga Ling, east of Shek Pik Reservoir. Google Map showed it is around here: https://goo.gl/maps/8AgyV1MqedD2

Satellite mode already shows you some cliff faces. If you connect to the Government GeoInfo Map site (http://www2.map.gov.hk/gih3/view/index.jsp) and use the string 鳳壁石澗 to look up the location, you should be able to see the contour lines. You really have to be an expert rock climber to go that way.

Hmmm... so the hiker was more of a rock climber, it sounds like! In any event, his accidental death is a reminder/more evidence that Hong Kong is by no means all concrete jungle and that some of its countryside is on the wild and rugged side.