A by-the-numbers look at my 2016 movie viewing year 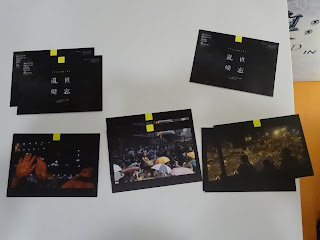 Postcards for Yellowing, one of three
Umbrella Movement documentaries I viewed this year 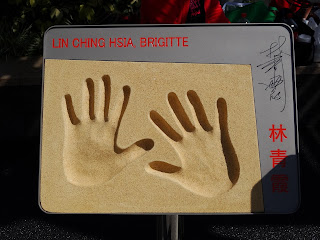 Handprints made by the woman who remains my favorite
actress of all time despite her last film appeareance
having been more than 22 years ago now! ;(


In the years since I moved to the Big Lychee, my passion for Hong Kong movies has faded somewhat -- or, rather, I still love the masterworks from the 1980s and 1990s that turned me into a mega filmophile for a time but I'm finding as the years go by that fewer and fewer films from anywhere in the world can get me as excited and ecstatic as those classics of Hong Kong cinema.  Consequently, I've become more selective in my choice of what movies to go and see (compared to previous years, including 2015, 2014, 2013, 2012, 2011, 2010, 2009, 2008 and 2007 all the way back to 2006); and my viewing numbers have accordingly dropped down to less than 100 this past year.


Still, I reckon that my 2016 movie viewing year did end up involving my checking out a respectable -- to my mind! -- number of cinematic gems, including some 2016 Hong Kong movies.  And I think it's a sign of my continuing cinemaphilia that I did get a kick out of discovering that I was at a locale where scenes from Akira Kurosawa's Dreams had been shot on one Japan trip this year and felt that I was able to appreciate the significance of visiting Sengakuji on my most recent Japan trip due to my having viewed Kenji Mizoguchi's films about The Loyal 47 Ronin all those years previously...!


1 -- The number of Malaysian movies I viewed in 2016; and even then, it was a co-production with Hong Kong and had a protagonist who's supposed to be a kid from the Big Apple! ;b


3 - The number of films starring the great Brigitte Lin Ching Hsia that I viewed on a big screen in 2016, including two for the first time ever (and for the record, they were Chungking Express and The Eagle Shooting Heroes)!


4 -- The number of movies starring the late great Setsuko Hara (my second favorite actress of all time!) that I viewed, a couple for the first time ever, in 2016

4 as well! -- The number of food or drink-themed feature films as well as documentaries (with titles like East Side Sushi and Kampai! For the Love of Sake) that I viewed last year! ;b


10 -- The number of documentaries I viewed for the first time last year, including ones about the Umbrella Movement


At least 10 -- The number of movies I rewatched in 2016, some for the first time ever on a big screen (and boy, were there some wonderful works among them: e.g., Peking Opera Blues, Doctor Zhivago, Ugetsu, Here's to the Young Lady, and The Heroic Trio!)


Also 17 -- The total number of 2016 Hong Kong movies (including Mainland China co-productions but not those with, say, Malaysia or Singapore) I viewed last year

22 -- The number of different territories whose films I viewed in 2016 (And for the record, they are: Australia, Bosnia and Herzegovina, Brazil, Britain, Canada, Denmark, France, Germany, Italy, Japan, Mainland China, Malaysia, the Netherlands, Qatar, Russia, Saudi Arabia, Singapore, South Africa, South Korea, Taiwan, the USA as well as Hong Kong)

25 -- The number of Hong Kong movies (including Mainland China, etc. co-productions) that I viewed for the first time last year

1916 - The year that DW Griffiths' Intolerance, the oldest film I viewed last year, was made

1959 -- The original year of release of Wedding Bells for Hedy, the oldest Hong Kong I viewed in 2016

It's fun to see your tally and commentary! As ever, your year-end lists make me realize that I don't watch all that many movies any more. However, we do tend to watch about one movie a week as a family, so I must have watched about 50 last year. (Though I think only 2 or 3 in the theater.) Maybe this year I will start to track them! Out of curiosity, how do you track your movie viewing?

Now that my kids are a bit older, we have started watching more movies that are not necessarily made for kids. (But still with the constraint of not being excessively mature.) I find myself wondering if the kids would be able to enjoy some of the Hong Kong movies I've enjoyed.

One movie a week is pretty respectable, I reckon. And yes, I think it may be time to introduce some Hong Kong movies to your kids. May I suggest "Wing Chun" to start off with? Also, if you can get hold of "Little Big Master", am thinking that might make for nice family fare.

As for how I track my movie viewing: I make a point to write down the titles of "new" films seen, my ratings for them, etc. shortly after I view them. And I'm also trying to make a point to review Asian films I've seen -- and also pretty much anything viewed at the HK International Film Festival -- on this blog again. :)