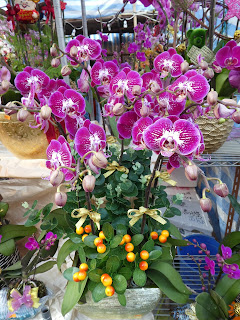 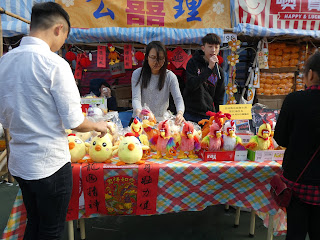 So too do chicken- and rooster-shaped plushies and toys this year! 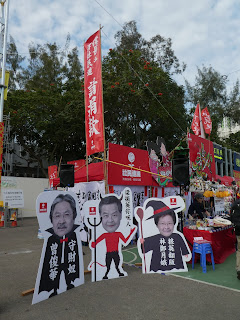 And a lunar new year flower market's no longer complete
without some anti-government political satire ;b
The 2017 lunar new year flower markets opened for business yesterday at 15 venues across Hong Kong but I didn't make my way to Victoria Park -- home of the largest of the festive markets -- until today for fear that it would be super crowded on a Sunday as well as the actual opening day.  A couple of friends who did go yesterday told me that the place hadn't actually been all that packed though, and when I finally did go and check things out myself earlier today, it all did seem to be on the quieter side than I've come to expect.

This state of affairs may not please the stall owners but it actually made my experience more pleasant since there was ample space for me to stroll about at my own preferred pace and it was easy enough to get unimpeded views and photographs of sights that caught my eye -- be they colorful flowers, chuckle-inducing chicken- and/or rooster-themed paraphenalia, barbed political humor or something else altogether.  And maybe because I consequently felt more relaxed today than when I visited the lunar new year flower markets of previous years, I actually ended getting into a buying mood and mode!
Still, although there were flowers on sale that I did think were really beautiful, I still think that I'm most appreciative of flowers found in the wild, such as the Chinese New Year flowers that I very much look forward to catching sight of when out hiking at this time of the year.  Also, I have to say that none of the chicken- or rooster-themed items I saw on sale at the festive market -- be they plushies, toys, cushions or tote bags -- truly tickled my fancy.
Instead, the two items that I came away with were political, rather than fowl, themed.  The first of these is a T-shirt with the message "Being born in uncertain times carries certain responsibilities" printed out in English and (Traditional) Chinese.  The second is a yellow umbrella -- to replace the umbrella that was "volunteered" and "sacrificed" to defend people being pepper sprayed by the police on the evening of November 6th of last year, when an #Oathgate protest march turned ugly after our way to the Liason Office was barred when we were just meters away from our planned destination.
And yes, this pair of items were indeed purchased at stalls run by pro-democracy political parties, and it is assumed their sale are part of fundraising efforts.  And while there may have been a time when I wondered whether a festive flower market was an appropriate place for politics to be present, these days, the sight of the stalls run by the likes of Demosisto, the Civic Party, the Democratic Party, the Labour Party and the League of Social Democrats to be a cause of celebration; this since it shows that protest still is allowed in Hong Kong and, frequently too, that people still are able to laugh at -- not just depressed about -- those who believe they know best for Hong Kong, yet are so demonstrably out of touch with ordinary people and, frequently, everyday reality too!
Posted by YTSL at 11:59 PM

Nice photos. Like your descriptions of the items you purchased. I was glad to read that there were political booths at the Lunar flower market.

Orchid are sure pretty. Coffee is on

Thanks. And FYI, two pro-independence political parties (Younginspiration, and the Hong Kong National Park) were denied permission to have booths at the flower market. On the other hand, in addition to the pro-democracy parties, the organization responsible for the annual June 4th vigil also are represented at the festive market.

I agree that orchids are pretty. I wish they smelled (stronger) though! ;S

You could definitely see your skills within the article you write.

The sector hopes for more passionate writers like you who are not
afraid to mention how they believe. At all times follow your heart.

Thank you for your comments and support.