Mythical creature spottings on Lantau on the first day of Chinese New Year! 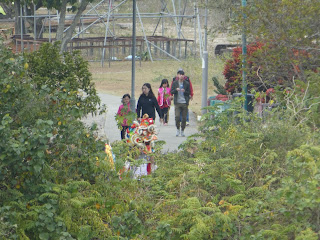 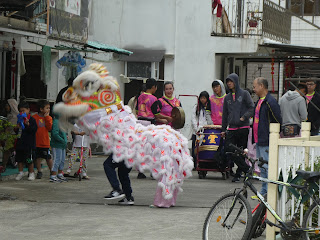 And then there was the dancing lion with
the Adidas-kitted front legs and paws... ;D
I know it's not the kind of activity that people usually engage in on the first day of Chinese New Year.  But what with the first day of the new lunar year of the rooster falling on the last day of this month in the Gregorian calendar, I spent a good part of today taking part in yet another beach clean-up at Lantau's Chi Ma Wan peninsula along with eight other game volunteers (including two local Hong Kongers as well as Hong Kong residents whose original countries of origin include France, the US, Singapore and the Philippines).
After cleaning one of the beaches by the now disused Chi Ma Wan Correctional Institution and Chi Sun Correctional Institution, our group trekked over to Pui O for lunch and a bus that'd either take people to Tung Chung (from where we were able to connect to other parts of Hong Kong by MTR) or Mui Wo (where there's a ferry link to Central).  As usual, we spotted some feral buffalo along the way.  And since it's Chinese New Year, after all, we shouldn't have been surprised to hear drumming at one of the villages we passed by and spot a colorful creature that I'd expect to be a dancing lion but, upon a closer look, reckon might have been a parading unicorn (i.e., qilin)!
During lunch at Pui O, the sounds of more drumming heralded the arrival of what I'm more certain this time was a dancing lion.  Amusingly, this particular local representative seemed to have some of the smallest as well as youngest people entrusted with bringing it to festive life.  In addition, this may actually have been the first lion dance troupe I've seen where females were allowed to "animate" the lions, not "just" beat out the rhythm on the drums.
Yet another unusual aspect of the dancing lion we saw in action was that, at times, its front legs had the Adidas brandname prominently displayed on it courtesy of one of the troupe members appearing to have neglected -- or plain forgotten! -- to put on the more standard pair of trousers worn by lion dance troupe members.  But even while some of us who spotted this could easily imagine that particular lion dance troupe member getting told off by his senior(s), I must admit to thinking that there's something charming to that lack of professionalism.
Put another way: the sense I got was that what we saw today in Lantau was a Chinese new year tradition being enthusiastically -- even if not entirely flawlessly -- enacted by regular folks for the pleasure of other regular folks, many of whom are family members, friends or neighbors of the performers.  Consequently, there was a sense of community rather than "community theater" to it all, along with enjoyable dollops of serendipity in terms of the non-Lantau residents among us being at the right place at the right time to catch sight of the local festive color that's part of the living culture of the area. :)
Posted by YTSL at 11:21 PM