Crab is king at Kanidou Noda! 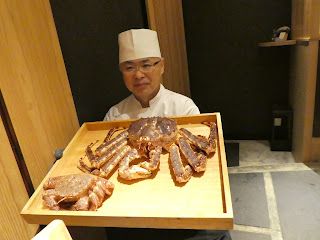 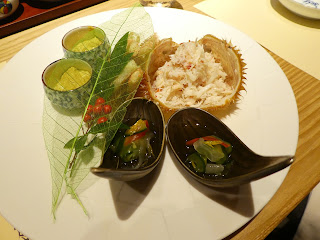 A feast for the eyes as well as the stomach ;b 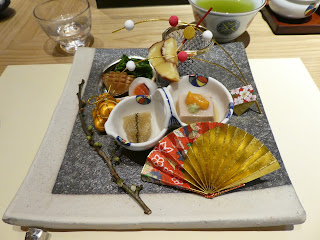 A rare crab-less course at this specialty crab restaurant!


Until I visited the amazing Osaka Aquarium in the summer of 2008, I had not realized that Japanese crabs could grow so big and look like they -- in particular, the Japanese spider crab -- served as the inspiration for many a creator of movie and TV monsters.  But while some may find their size and general appearance off-putting, others see these crustaceans and only think of how delicious they can be; particularly those who've had the good fortune to have partaken of crab feasts at such kani-ya (Japanese specialty crab restaurants) as Sapporo's venerable Hyousetsu-no-mon.


So when my über foodie friend told me she recently had a wonderful crab omakase meal at Kanidou Noda, over in Sheung Wan, and wanted to dine there again sooner rather than later, I didn't hesitate to tell her that I'd go with her when she went again.  On the evening in question, I got to the restaurant before her and had time to not only scan the very minimalist menu but also get some idea of what was in store by seeing what two other customers seated close to me were being served.


As it so happened, my seat also gave me a good view of the grill on which the evening's two optional extras -- wagyu beef steak, and unagi (eel) -- were being tantalizingly cooked.  When my friend arrived though, she assured me that we'd have plenty of good food from the "regular" omakase set and needn't order anything extra.  And after we were shown the large tarabagani (king crab) and also not insubstantial kegani (Japanese hairy crab) that we'd be eating that evening by one of the chefs, I decided that she was right; with this feeling becoming stronger still upon our being served a crab-less appetizer platter that consisted of such delectables as abalone, herring roe and soft tofu topped with uni (sea urchin gonad!).

While there were a couple of other dishes (including dessert) that were crab-less, the vast majority of the courses did consist of variously prepared and cooked crab.  Crab sashimi, grilled king crab leg, crab tempura (perhaps my favorite single course of the meal despite my prematurely thinking it seemed a waste to coat in batter and deep fry such fine ingredients), crab shabu shabu, crab rice (into which a generous portion of uni was mixed): we had all that and more!


In his book Sushi and Beyond: What the Japanese Know about Cooking, British writer-humorist Michael Booth had written about how he had initially been underwhelmed by the crab meal he had had in Sapporo but then ended up pining for the delicate taste of the crustacean's meat while not doing so for the Sapporo-style miso ramen which he had initially been more enthused by.  I, on the other hand, had been blown away by what I had eaten at Sapporo's kani-ya from the get go -- and I have to admit that those meals now serve as my probably unfair yardstick for any crab meals I have.


If truth be told, the dinner at Kanidou Noda doesn't match those high standards -- through no fault of the crabs.  Actually, all of the crab meat served at this kani-ya whose crabs all hail from Hokkaido (like with those specialty crab restaurants I dined at in Sapporo) were pretty delicious.  But the kani miso (which, incidentally, is one of my favorite sushi toppings) and tsukemono (Japanese pickles) were oddly weak in flavor, and I wish that the uni hadn't been so thoroughly mixed into the crab rice to the extent that I couldn't really pick out its usually very distinct taste.

Based on this experience, I think I'll wait until I'm in Japan again to have another crab omakase or kaiseki meal.  If only Kanidou Noda had a la carte options.  If so, I'd go back for the crab tempura -- and, when I think of it, the crab shabu shabu too!
Posted by YTSL at 11:14 PM