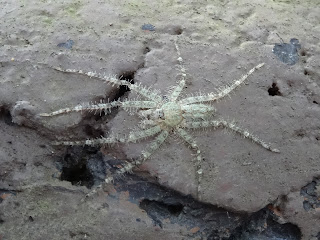 Not the usual kind of arachnid one sees while
hiking in the Hong Kong countryside! 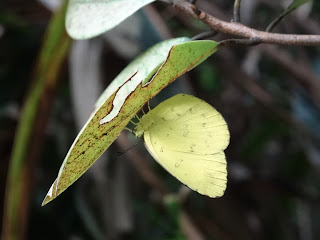 Not the usual perching pose one expects to see of a butterfly!
Earlier today, I saw a butterfly flit by while I was walking in Hong Kong.  While this is to be expected when hiking in the countryside on a summer afternoon (or even in the spring or sometimes even fall), it's not my usual experience when strolling about in a decidedly urban part of the Big Lyche on a winter's day, as was the case today!
And while we're talking about unusual: even though it's located on Hong Kong Island and one of the access points to it is within walking distance of not just one but two different MTR stations, Tai Tam Country Park (including its Quarry Bay Extension) actually is home to a number of wild creatures: some of which one simply doesn't expect to see so close to the city, and others of which are of the kind whose subspecies I didn't know existed -- period! -- until I cast my eyes upon them within this particular country park's borders!

As improbable as it may sound, I once saw -- but was unable to photograph, before it moved away -- a pretty large lizard (like the one I saw up on a tree over in Sai Kung East Country Park some time later) basking in the sun on the banks of Tai Tam Upper Reservoir.  Then there were the pair of copulating stink bugs (whose female member seemed intent on eating at the same time as making whoopie!), the crabs that I initially thought must have been dropped so far uphill by birds or some such creatures (but found out via a blog visitor actually have the woodlands as their natural habitat!), and such as the brightly colored, long-tailed lizards that I got to learn are called skinks.

All in all, because the landscape of Tai Tam Country Park has become pretty familiar to me over the years, it's frequently the case that this or that cool critter spotting ends up being the highlight of my hike in this part of Hong Kong.  Of course, this is not to say that I have become immune to the scenic beauty of such as the Tai Tam Reservoirs or the views to be had from Violet Hill or Siu Ma Shan and Mount Butler.  But when you do such as cast your eyes for the first time on a type of creature you previously had not known existed, or even see a critter you're familiar with doing something you didn't expect, it really can feel pretty special and particularly cool! ;)
Posted by YTSL at 10:42 PM

I always love your shots from hikes and this critter spotting is great. I'm glad you mentioned once seeing a lizard even if you didn't get the shot. I have a lot of shots that get way before I can click.

I often feel that butterflies, in particular, can be such teases and difficult to get to stay still enough for me to photograph. As for snakes: There've been quite a few that cause me to freeze and, for better or worse, they're gone before I can think to want to get a photo of them!

Again nice photos. You new camera seems to be excellent at taking a variety of photos. Have you or anyone identified the critter in the first photo?

I'm still experimenting with my "new" camera but so far, mainly good! Re the critter in the first photo: I think it's a spider but what kind has yet to be identified!