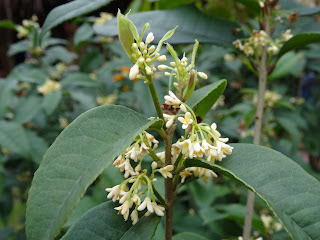 They may not look like much but Osmanthus flowers
smell ever so lovely :) 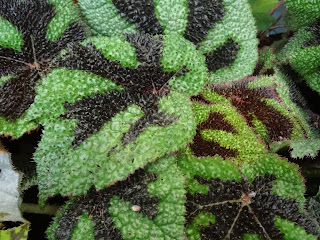 With Iron Cross Begonias, it's their leaves
which are most eye-catching 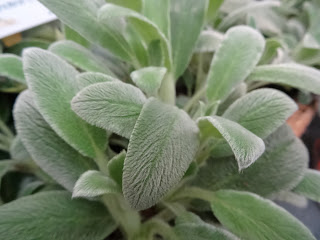 I looooved how these Lamb's Ears felt to the touch;b
I've been a big fan of the Kadoorie Farm & Botanical Garden ever since I first visited the 148 hectare facility located on the northern slopes of Tai Mo Shan on a beautiful blue sky day back in 2011.  While my two friends' and my main concern on that occasion was to hike up the 546-meter-high Kwun Yam Shan located within its grounds and also check out a memorial pavilion located over 600 meters above sea level, we still came away with an appreciation of it as a place where one could get up close to a wide variety of cultivated and wild flora and fauna.
Despite this New Territories facility being accessible by public transport, there are many people who think a trip to its expansive site is not worth the bother.  So it's good to see the Kadoorie Farm & Botanical Garden folks doing such as having a booth at the Hong Kong Flower Show held at Victoria Park each year.  And, as it so happens, the education and conservation center's exhibit was my favorite one at the floral extravaganza this year!

While most of the other displays looked to focus on catching the eye, the Kadoorie Farm and Botanical Garden's served up reminders that we can -- and should -- make use of others of our five senses to enjoy what's on offer.  For one thing, guides were on hand at the booth to verbally communicate with visitors (though those who preferred to get their information by reading text also were catered to).  More unusually, visitors were encouraged to touch the plants on display and smell the flowers on show in the area.
If truth be told, if I hadn't been told that it was okay to touch them, I wouldn't have dared to touch the leaves of the Iron Cross Begonias -- which looked spiky enough to draw blood but actually turned out to feel rough but not all that sharp.  And after I touched the Lambs' Ears, I'm not sure how I managed to wrest my hands away from them -- because they were so wonderfully soft that, if I closed my eyes, I could easily have thought that I was stroking a cat's paw or silky suede plushie!
On the other hand, I tend to not need all that much encouragement to put my nose close to flowers and sniff -- this even after I've read more than one story of someone getting stung by a bee while doing so!  And although such as the roses at the Kadoorie Farm and Botanical Garden's booth smelled lovely, nothing could beat the sweet scent of the Osmanthus flowers that were blooming in another part of Victoria Park that day.

Years before I moved to Hong Kong, I learnt of the existence of Osmanthus flowers from watching 1987 Taiwanese drama Osmanthus Alley.  But it's only after moving to the Big Lychee that I found out what those blooms smell like -- and also how good Osmanthus jelly desserts are!  (And yes, I don't need to be told that certain flowers taste good since I've long loved rose syrup drinks, chrysanthemum tea and eldeflower wine, among other things! ;b)
Posted by YTSL at 10:07 PM