One foggy day a few years ago, a friend and I hiked up the Ngong Ping Rescue Trail which frequently passed under the Ngong Ping 360 cable car route.  One far sunnier -- and warmer -- afternoon, Lantau's Ngong Ping plateau (as opposed to the one in Ma On Shan Country Park!) called to me once more.

But rather than hike up there this time around, I took the easy option of going up there by cable car; saving my energy instead for the descent from Ngong Ping plateau all the way back down to Tung Chung town via a trail that passed by a couple of monasteries, a number of religious retreats, Shek Mun Kap and Wong Ka Wai (a village I always wanted to check out just because its name resembled that of a certain famous Hong Kong filmmaker!).  Along the way, I also went and explored Tung Chung Fort on the outskirts of Tung Chung new town.

All in all, it was a day which offered up plenty of interesting sights; this not least because it was one where the clear air ensured that one could see for miles and mile. What was the icing for the cake for me though was there being many interesting critters actively out and about.  That and the many cool cultural sights along the way made it so that being outdoors in Hong Kong was so wonderful that I really didn't mind too much that I ended up sweating buckets that afternoon! :) 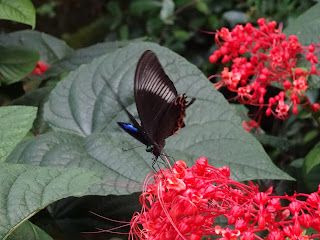 On Ngong Ping plateau, I caught sight of this beautiful
peacock butterfly with orange bits on the outer side
of its wings and blue bits on the other 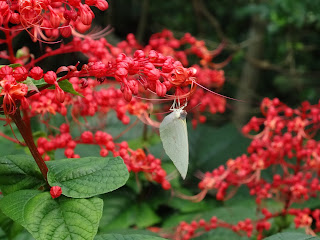 The Lemon Emigrant is a smaller and less colorful butterfly
which sometimes can get mistaken for a leaf! ;b 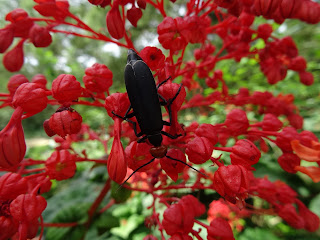 An interesting -- even scary looking? -- beetle attracted
to the same clump of flowers as the butterflies 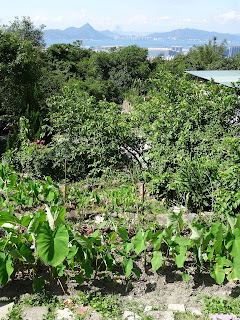 Go down the trail to Tei Tong Tsai and you'll
see a farmed garden (and on clear days,
views of Castle Peak and Tuen Mun in the distance)! 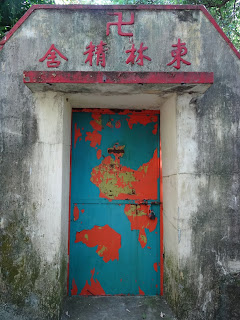 The weathering on a door of a Buddhist retreat
located further downhill has turned it into
an abstract art contender to my mind ;) 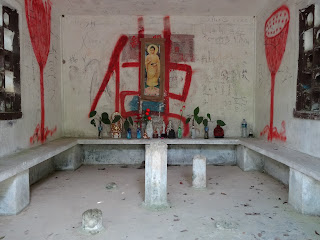 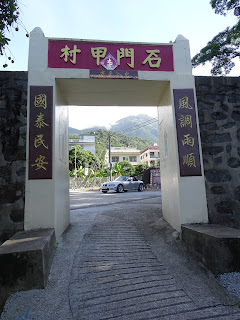 An archway at Shek Mun Kap village that's so old
that its top-most characters are written from right to left
(rather than left to right as is the case these days!) 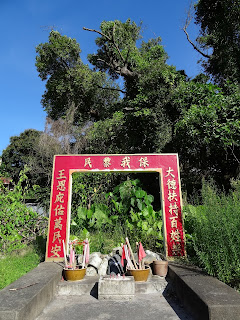 Between Wong Ka Wai and Tung Chung can be
found the kind of shrine that appears to be dedicated
to sacred rocks, trees and other ancient Chinese spirits
Posted by YTSL at 9:31 PM

Have you gone to the Tung Chung Battery as well? https://goo.gl/maps/23Bx6JMUJrk http://www.amo.gov.hk/en/monuments_22.php This is partially destroyed as villagers near by raided it for building material long time ago.

For this route I would usually go up. My last trip there went down the other side and follow Lantau Trial to Tai O.

Yup, have been to the Tung Chung Battery...

Went there years before I did Tung Chung Fort because the battery was on the way on a hike that took my friends and I from Tung Chung town to Tai O. :)

This entry has a variety of sights one may see along the way. The striking peacock butterfly's wings resemble a clam shell. The Lemon Emigrant is the most inconspicuous and it has a kind of endearing charm. The armoured beetle looks as if it is combat ready!

Your "shelter turned into a shrine" is the kind of sight I would enjoy discovering because you probably wouldn't find it listed in a guidebook...Your photo of the door of a Buddhist retreat which you accurately describe as "abstract" is a good example of how one may isolate designs in a natural or urban setting and contemplate them as if they were art. Looking at your photo of the door, I immediately compared it to an aerial view of an archipelago. I would argue that this is an example of a kind of art which you don't have to go to a museum to experience.

I'm glad you got so much out of this batch of my photos! And I feel you really "get" what I find so attractive about hiking in Hong Kong. :)