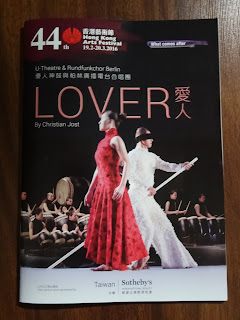 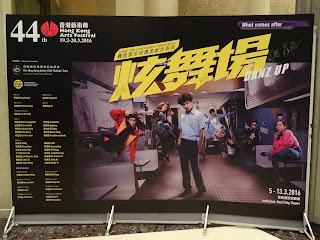 Poster for the Hong Kong Arts Festival show
my mother and I saw this evening
Back in 2007, I viewed a Hong Kong movie about a young Hong Konger whose life, and outlook, is irrevocably changed after he encounters a reclusive community of Zen drummers who also practice meditation and the internal martial arts form known as tai chi in a remote Taiwanese village.  Kenneth Bi's The Drummer stars Jaycee Chan (who's still best known as Jackie Chan's son) and Lee Sinje (who the film's director informed me doesn't like to be called Angelica Lee).
But while both those singer-thespians put in solid performances in the movie, Taiwanese performing arts troupe U Theatre memorably stole the show with their incredible drumming performances.  So, when given a chance to see and hear U Theatre perform live on stage, I've leapt at the chance to do so -- including on Sunday, when the Taiwanese troupe collaborated with German composer Christian Jost and the Rundfunkchor Berlin to present musical theatre work Lover at the Hong Kong Arts Festival.
Billed as an artistic meeting between East and West, this production directed by U Theatre founder Liu Ruo Yu combined U Theatre's percussion music and often martial artistic-looking dancing with the kind of singing from the German choir that one would not seem out of place in a church or cathedral.  I have to admit that I actually may prefer to hear both these groups performing on their own -- but together, they definitely did produce some interesting, and at times otherworldly sounding, music.  And I definitely preferred this 2016 Hong Kong Arts Festival show to the one I saw late last month!

Even better still was Danz Up, a dance drama my mother and I viewed earlier this evening which was choreographed by Shing Mak, who also was in charge of the dance choreography for The Way We Dance, my favorite Hong Kong movie of 2013.  And although this production's director (Tang Wai Kit) and scriptwriter (Matthew Cheng) differ from that of the Adam Wong-directed and co-scripted (with Saville Chan and Chan Tai Lee) film, it has some ties and similarities to the 2013 hit movie that turn out to the good.
Among other things, two cast members from the film (Lokman Yeung and Lydia Lau) also feature in this show.  Also, there's no getting past Danz Up's story of a working class kid who aspires to get into higher education and join an academy's dance crew having parallels with the movie's -- even though this dance drama's protagonist is male rather than female.

However, whereas romance prominently featured in the movie, Danz Up inserts nostalgia for Hong Kong's past and makes space for older folks to play a part, and even show some nifty dance moves that were greatly appreciated by this evening's audience!  All in all, one could see (and hear) tonight that along with the younger stars (notably Cliff Huen Tin Yeung, who's extremely likeable as the show's lead character), the veteran likes of Lau Siu Ming and Bonnie Wong still have their fans -- even among the predominantly young (as in school-age) crowd at the show this evening!
More than incidentally, the eagle-eyed among you may have noticed that I've not been viewing many films lately -- and, indeed, more than a week can actually go by without my going to watch a single movie.  This will change soon, however, since the Hong Kong International Film Festival will begin on March 21st, and I've already got tickets to 19 of its screenings! ;b
Posted by YTSL at 11:59 PM