A visit to the Po Leung Kuk Museum in Causeway Bay 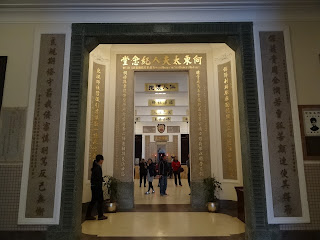 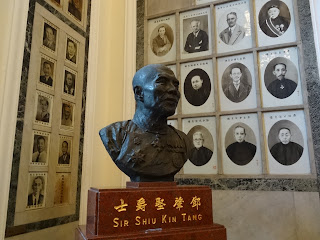 Among the notables honored at Po Leung Kuk
The Po Leung Kuk Headquarters in Causeway Bay is one of the more visually distinctive buildings in the area and consequently one which invariably catches the eye even if one has no idea what's actually in it.  But although I was aware of such as its Bruce Lee movie connection, I actually knew very little about what was contained within its walls -- other than part of it being used as an orphanage (something which many people think that the Po Leung Kuk is entirely about).

So when I had a chance via the Sacred Spaces meetup.com group to visit the place and find out more about this charitable organization which was established in the 19th century to protect and assist destitute women as well as children, I jumped at the chance to do so.  Thus it was that one Saturday afternoon earlier this year, I found myself going with a large group of interested folks for a guided tour of the Po Leung Kuk Museum situated in that space.
Before anything else: the Po Leung Kuk Museum is open to the public, so it's possible to go there by oneself.  However, the old school style of the displays in the exhibition rooms don't make them all that visitor friendly.   And while the Old Hall which now is part of the museum is visually impressive, it currently lacks informative signage (at least in English) and contextualizing information to humanize the individual whose stern looking portraits and busts have pride of place within it.

Consequently, this museum (which began life in 1998 as the Po Leung Kuk Archives) really benefits from having an enthusiastic guide, like the one our group was fortunate enough to be assigned, who's capable of making the Po Leung Kuk's story come alive: by doing such as providing us with colorful details and fleshing out the tales of the people whose faces we saw in photographs and on statues, and names on documents and plaques on display within the walls of the institution.
Thus it was that we learnt that the man depicted in a large painting hanging in the Old Hall was one of the men behind Tiger Balm, and that a stern-looking matriach whose black and white photograph also can be seen there is one of Stanley Ho's ancestors.  Over in the exhibition halls, we were regaled with tales of the Po Leung Kuk having done such as helped grown-up orphan females find jobs and, in some cases, husbands too!  Also interesting was the story of how the Po Leung Kuk having helped some Japanese women who had been abducted to Hong Kong earned it recognition from the Japanese emperor and that had, in turn, protected the organization from harm when Hong Kong was occupied by the Japanese military during the Second World War.
In addition, a visit to this museum will have one realizing that the Po Leung Kuk has grown into a venerable charitable organization offers a wide range of services for the community at large by operating such as schools, medical facilities and nursing homes as well as orphanages.  And this female found it rather cool to discover, by way a perusal of the portraits of the Po Leung Kuk's board of directors over the years that hang on the institution's walls, that it's come to be so that not only does the Po Leung Kuk now help males as well as females but it also is led these days by women as well as men. :)
Posted by YTSL at 11:48 PM