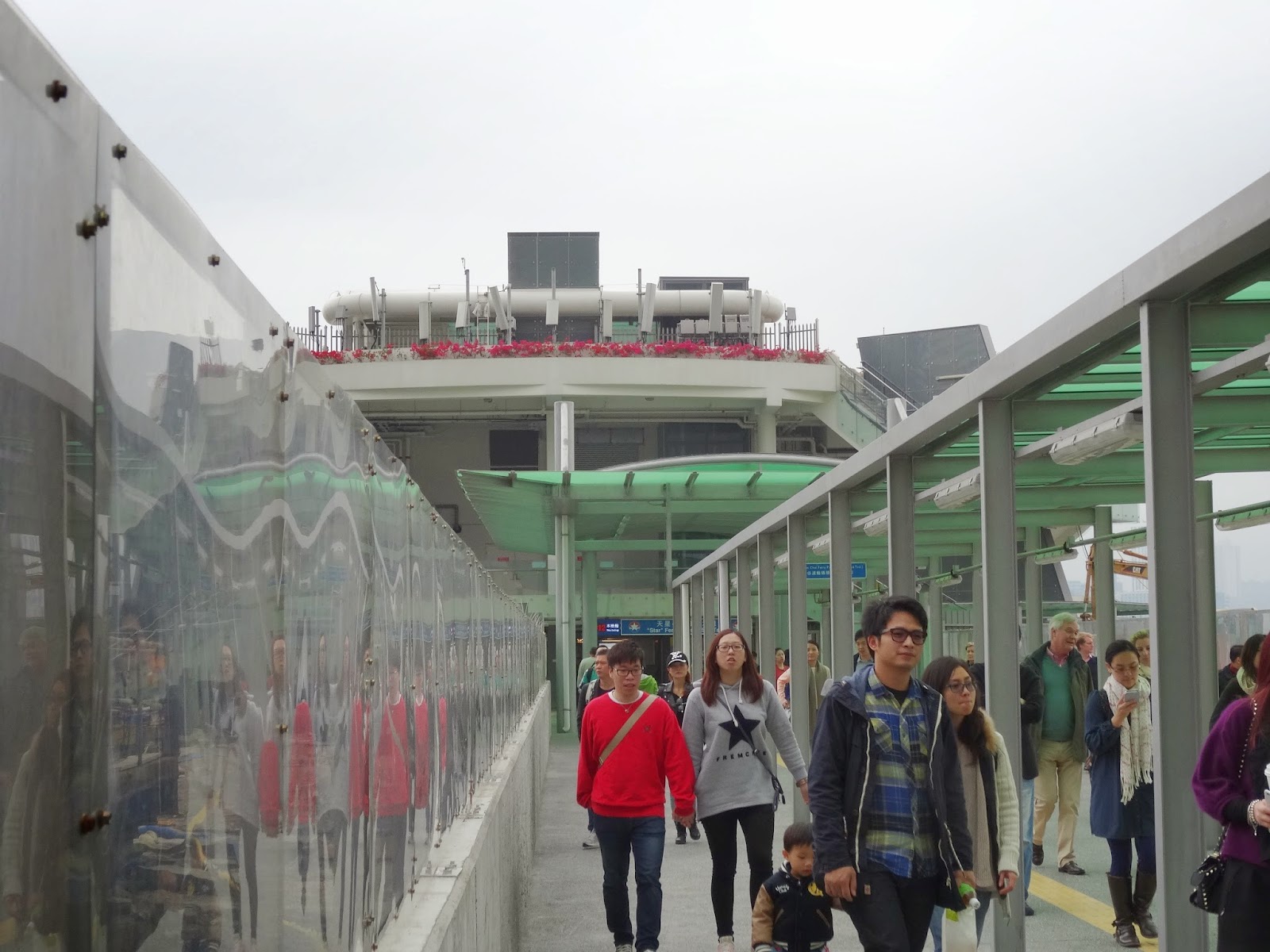 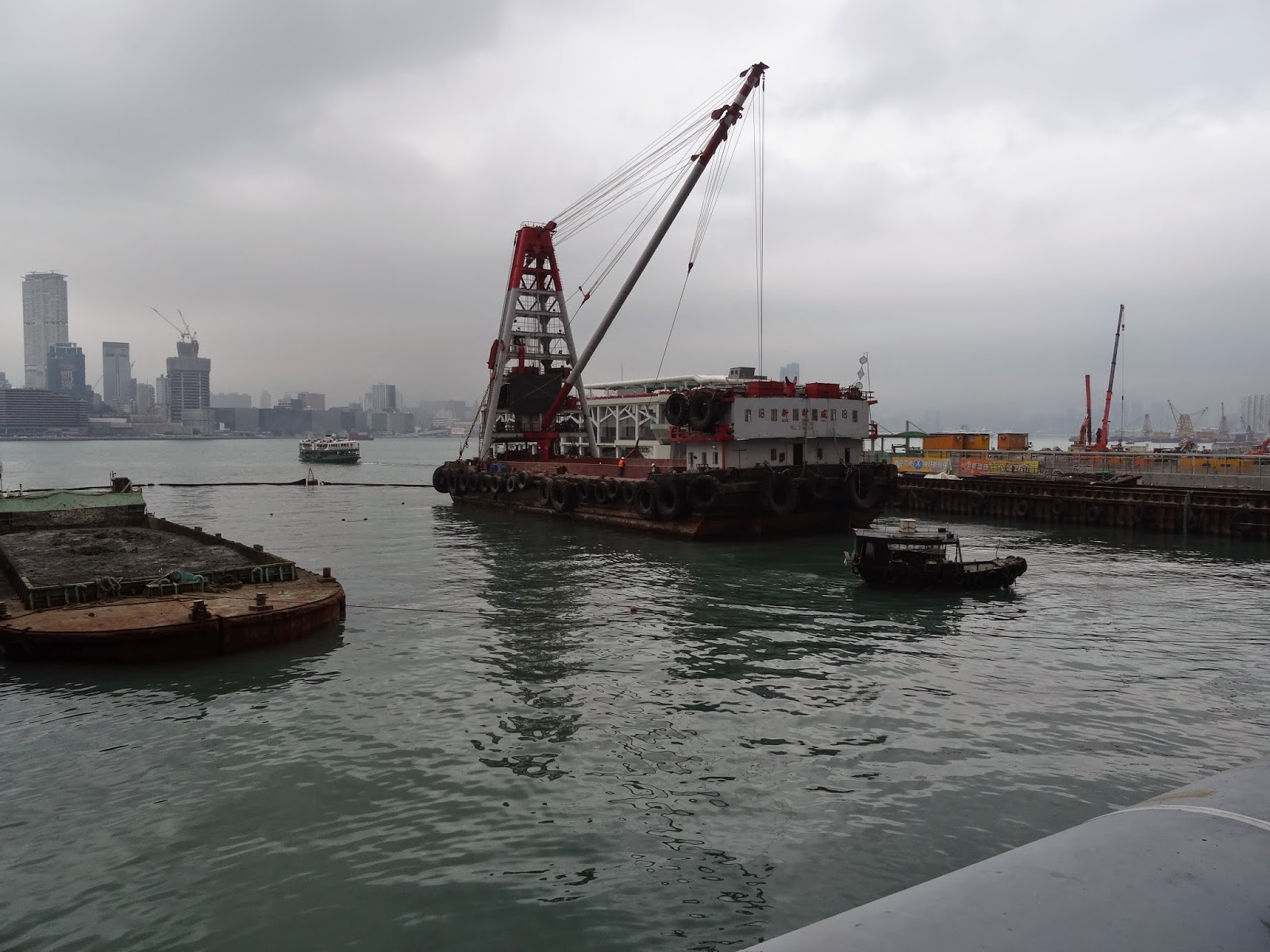 Meanwhile, the pier that it replaced is most definitely gone
-- as this photo taken of where it used to be shows!
Some days I feel so unobservant.  This was how I felt when I got off the Tsim Sha Tsui to Wan Chai Star Ferry and suddenly felt disoriented upon discovering that the pier that the ferry had docked at was one I had never been on before.
Since my regular work commute takes me past the Wan Chai ferry pier, I've know that quite a bit of land reclamation and construction has been going on in the area over the past couple of years or so.  And I've even noticed a new ferry pier building going up a hundred meters or so to the east of the Wan Chai ferry pier from where I had taken ferries to -- and got off ferries from -- Tsim Sha Tsui.

Somehow though, I had failed to notice when the Wan Chai ferry pier I knew -- and could even say I loved to some extent -- ceased to exist, never mind ceased operations!  One reason, I suppose, is that the tearing down of the building took place behind high fence walls.  But another reason is that I just hadn't noticed -- probably because I somehow was always looking the other way during those particular sections of my commute, or was deep into reading a newspaper or magazine, or just deep into my own thoughts!

After I made my way out of the new Wan Chai Ferry Pier last Saturday afternoon, I texted a friend to ask her when this new ferry pier had come into operation.  Before Chinese New Year was her answer -- but even while she's right, I think she too would be surprised to discover that the old Wan Chai Star Ferry Pier closed its doors as far back as August 29 of last year -- and the new Wan Chai ferry pier began operations the next day on August 30, 2014!

Some time back, an artist friend of mine expressed his distaste for the architectural design of this new Wan Chai ferry pier.  I can't say though that I am aesthetically revulsed by it.  And I'm also glad that this new ferry pier isn't located all that far away from the old Wan Chai ferry pier (which actually was a second generation pier, in operation between 1968 to 1914, that replaced the original pier that was in operation from 1949 to 1968).

On the other hand, I really do miss the old Central Star Ferry Pier (or Edinburgh Place Ferry Pier to give it its official name) which was gone by the time I moved to Hong Kong in 2007 but which I passed through several times when visiting Hong Kong in the past.  In particular, I miss it when the Hong Kong International Film Festival (HKIFF) is in full swing -- as in the past, its existence made travelling between two major HKIFF venues (i.e., the Hong Kong Cultural Centre over in Tsim Sha Tsui and Hong Kong City Hall in Central) very convenient by Star Ferry!
Posted by YTSL at 8:28 PM

A pleasure reading another of your ferry photo-essays, this one about a new ferry pier...Actually, I find Hong Kong's ferries, trams, and doubledecker bus routes, all to be equally fascinating parts of an impressively efficient transportation system. For people who don't like to drive cars, Hong Kong is an ideal urban environment because you can get to just about anywhere by public transport...Lucky you for living in such a centralized city and its accessible environs.

HI YTSL -- I saw the new ferry pier when I was in one of the hotels in Wan Chai and asked the staff there about it. They said they built the new one first that juts out in front of the old one before knocking down the latter. Obviously there wasn't much fanfare about the new pier!

Absolutely re Hong Kong having a great transportation system. And yes, I totally love not having to drive here! Driving was the bane of my life in Kuala Lumpur! ;b

I noticed them building the new ferry pier over time. I just didn't realize it had opened because it looks like construction is not all complete yet! If you go there, you'll see what I mean -- e.g., the path to and out of the pier looks temporary still!