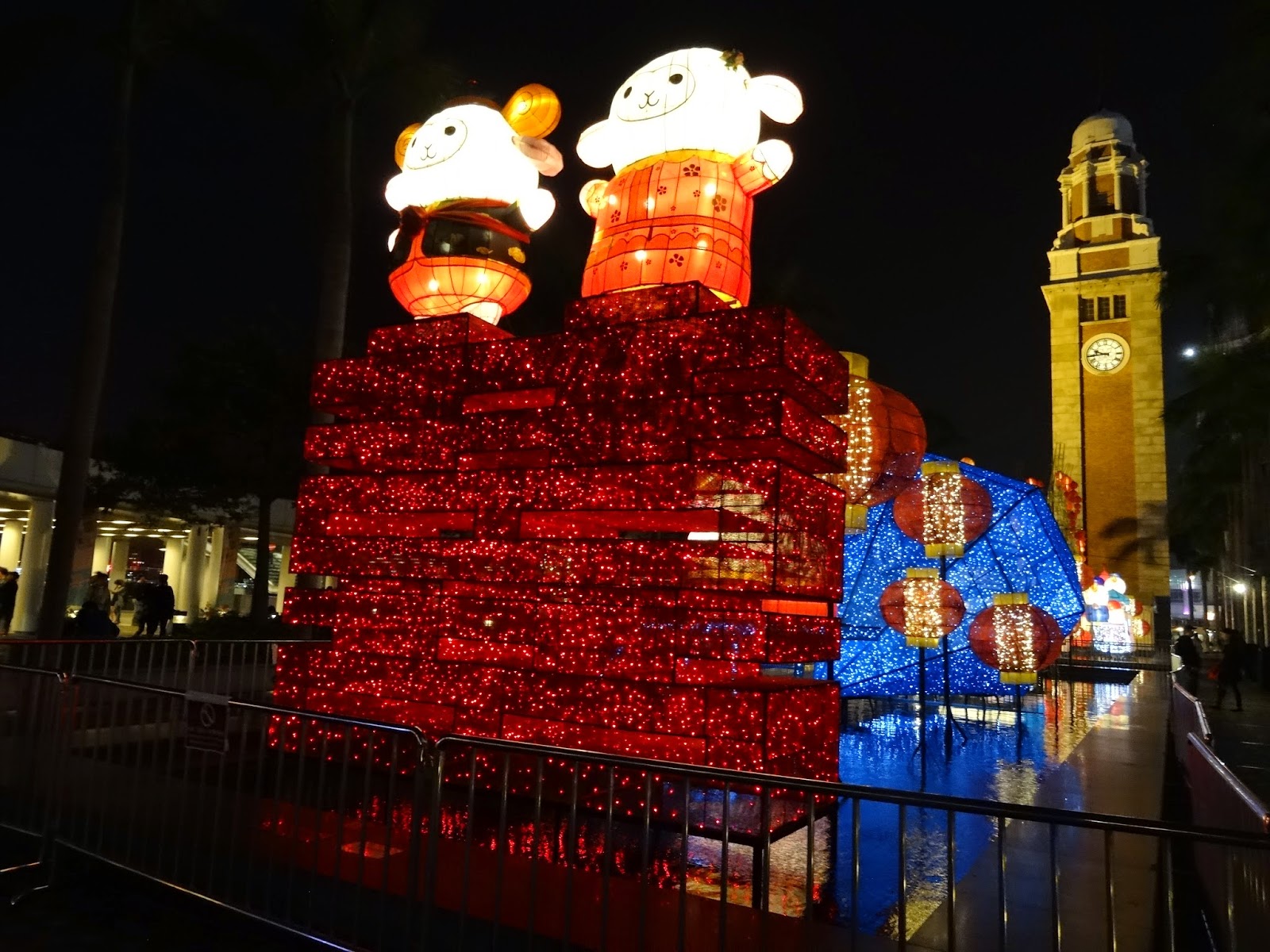 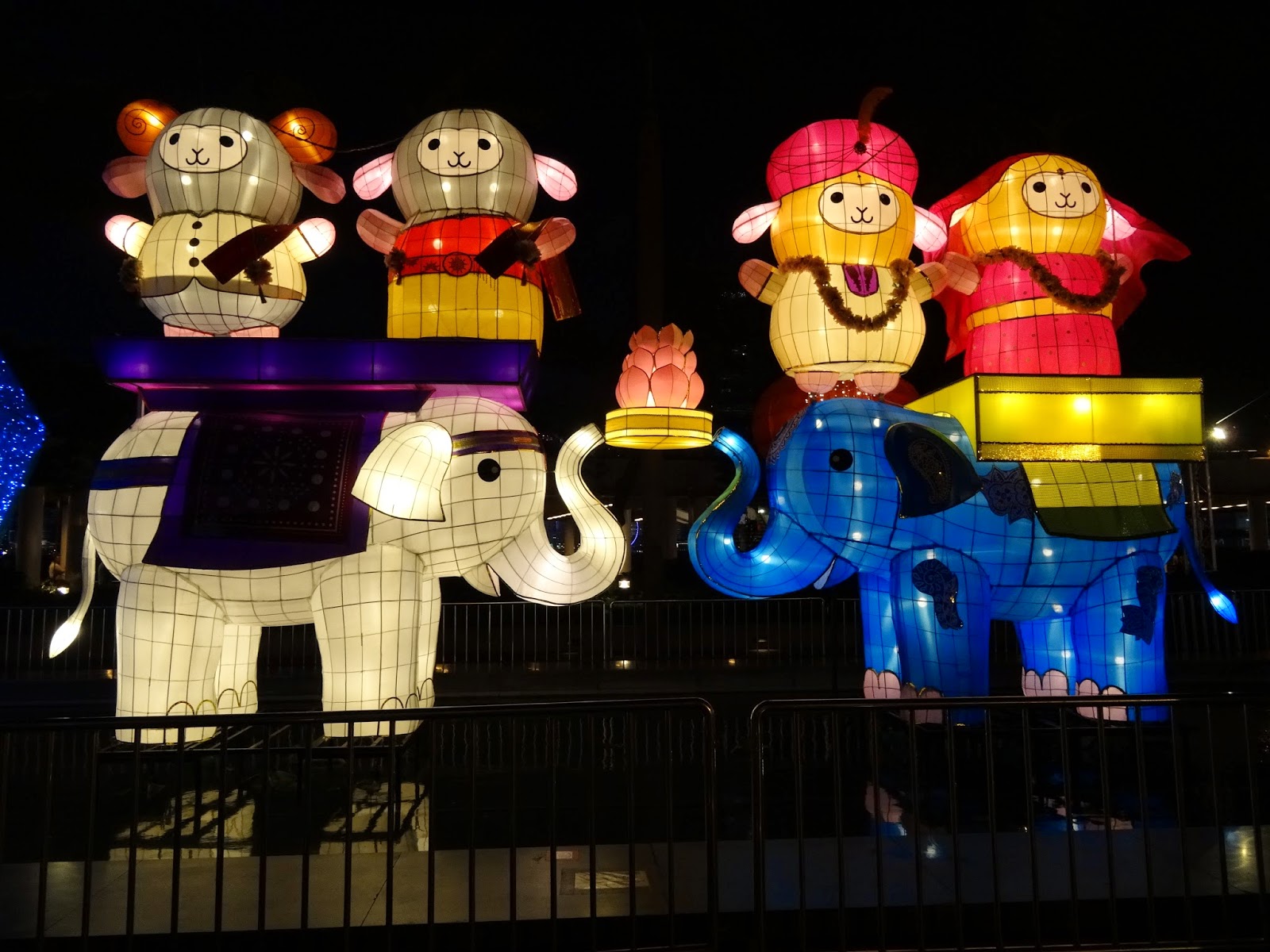 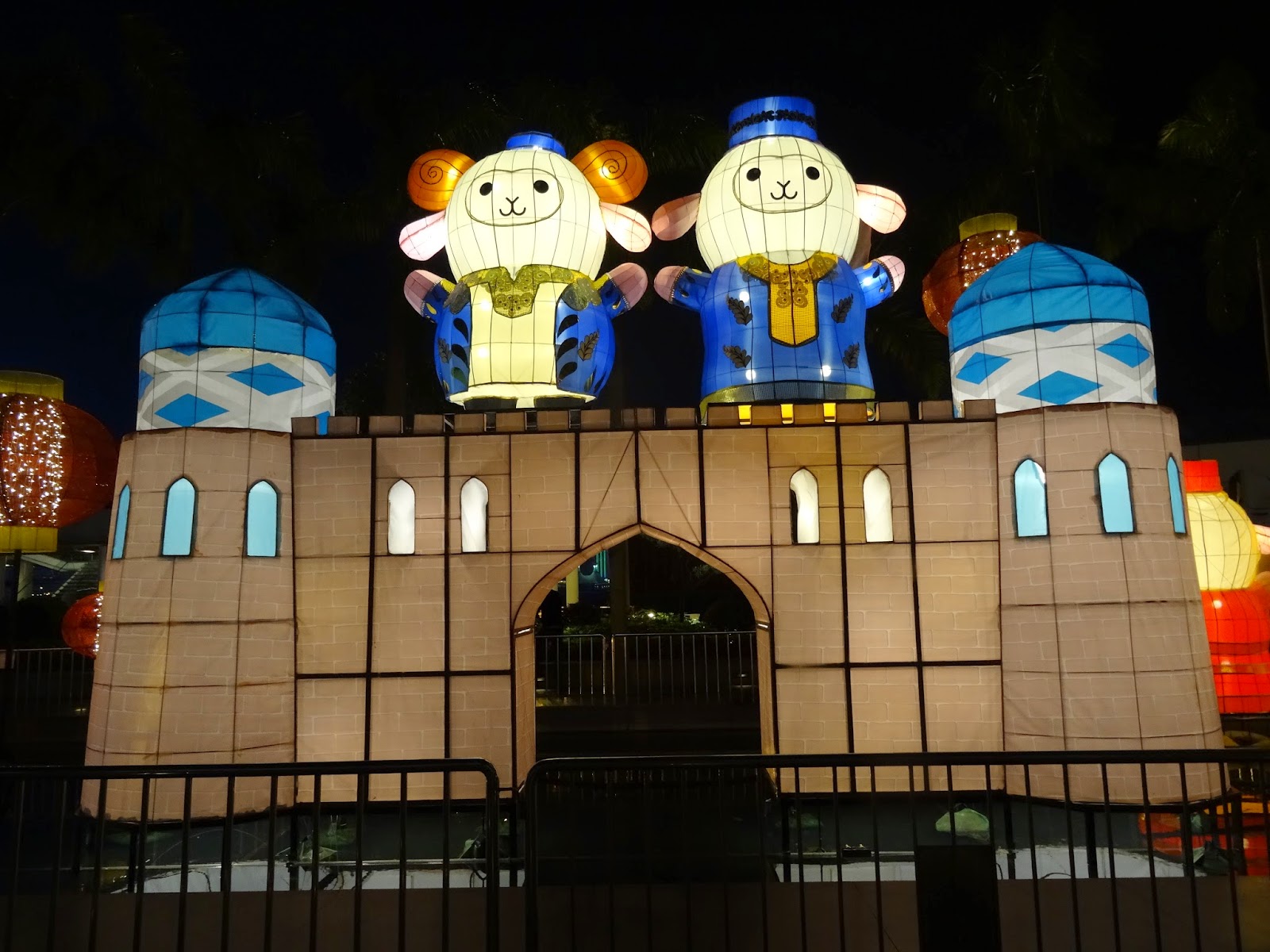 Another sheep couple -- this one atop a building
and in get ups that get me thinking of Central Asia!


Better late than never?  Since February 12th, there's been a Lunar New Year lantern display at the Hong Kong Cultural Centre Piazza over at the Tsim Sha Tsui waterfront.


Last weekend, I walked by it during the day and it didn't looked all that interesting.  But after attending the Cassandra Wilson concert this evening at the Hong Kong Cultural Centre, I decided to return to Hong Kong Island by ferry, and my walking route to the Tsim Sha Tsui Star Ferry pier involved me passing by the lit up -- and consequently brightly colored and more eye-catching-- lantern display.


The first figures that caught my attention were ones atop two elephants.  My first reaction on seeing them was "They don't look very Chinese nor lunar new year themed!"  Also, until I read the information on a display panel, I wouldn't have known that the figures are meant to be sheep couples -- but that is apparently what they are!

More specifically, I learnt, "A number of Asian "Sheep" couples dressed in various ethnical (sic!) & traditional wedding costumes would like to invite you to join their happy wedding at the Hong Kong Cultural Centre Piazza. Let's celebrate the Year of the Sheep with this spectacular and joyful lantern display!" -- one which actually was on display for the final time tonight!

Oh, and for those who are wondering how come I wrote about seeing goats at the Hong Kong Flower Show yesterday but sheep tonight, it's because the Chinese "yang" (whose year this is) can be translated into English as goat, sheep or ram!  As for why this year's lunar new year lantern display is wedding-  -- as well as sheep- -- themed, that I really have no idea! ;D
Posted by YTSL at 11:25 PM

Yes I've seen these too and I stood there shaking my head. It is a bizarre display!

I sometimes think the people charged with coming up with ideas for lantern display (and flower display) themes should be interviewed as to how the heck they come up with the ideas they do... ;b

I have to admit: I think funny more than fun! ;b

There is a touch of "whimsy" and fantasy in this lantern photo-essay. My favorite photo is the top one of the sheep couple. It amazes me that the old clock tower escaped demolition, and this symbol of Hong Kong's architectural and transportation history, does look glowing in the background.

Keeping my fantasy alive, I used your link to the excellent Fragrant Harbour website. There I entered into the world of a Totoro sighting at the wonderful Ocean Terminal/Harbour City. Any Studio Ghibli fan will get a rush from this model of Totoro at Donguri Republic. Personally, what I remember most strongly about the famous scene by the bus stop in the film - is the haunting sound of the rain...This is an example of what's great about interlinking websites - you link to an additional site, taking you somewhere unexpected...

Well, I might as well take this virtual fantasy a step further, leave Donguri, and make my way to the upper level-parking lot of Ocean Terminal, and look at Victoria Harbour and the lights of Hong Kong.

To see more photos taken at that Donguri Republic Hong Kong store (from a different visit), you can follow the following link:-
http://webs-of-significance.blogspot.hk/2013/06/donguri-republic-comes-to-hong-kong.html