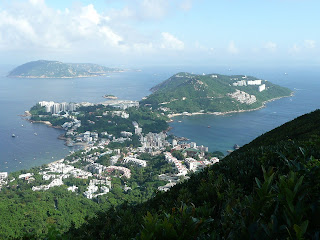 The view of Stanley and beyond from The Twins
on a beautiful, high visibility summer day :) 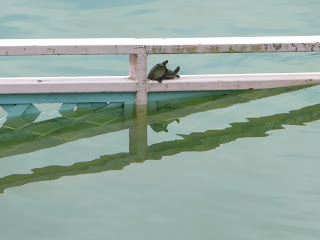 Some goings-on I couldn't help but
notice early on in the hike ;b 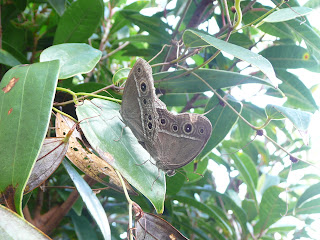 More than one species were going at it
in open view this afternoon!! :O

Last Sunday, I cancelled my hiking excursion for fear of bad weather only for it to not rain all that afternoon.  Today, I set out for a hiking with a new hiking buddy despite there having been thunderstorms in the morning.  And while some might see that as taking a chance, past experience also taught me that the afternoon after a morning of thunderstorms can yield blue skies and high visibility -- and thus it was today.

So come around noon time, my hiking buddy and I set off for Wong Nai Chung Gap along a trail to Repulse Bay Gap (AKA Tsin Shui Wan Au) that hugged the edge of Violet Hill before going on the portion of the Wilson Trail which, when done in reverse, takes one up and over the Twins down towards Stanley.

When I began hiking in Hong Kong some six years ago now, I didn't think I'd ever "conquer" the Twins -- and not once but twice, and the second time in the summer to boot!  But it really does speak to my feeling (and -- touch wood -- being) quite a bit healthier now than when I was living in Malaysia that I can now do so!!

I also see it as a sign of my being fitter these days that even while hiking along a trail that could be to be said to on the demanding, even difficult, side, I can pay notice to my surroundings and do such as enjoy the beautiful vistas that unfold around me... and, yes, spot a variety of critters, including those that were busily coupling in broad daylight!

With regards to the tortoises: I know that those creatures like to get on top of one another, and not necessarily just for sex -- but in this case, I think that's what they were doing so for.  As for the butterflies: I've mentioned more than once that one reason why I'm so delighted to catch butterflies and dragonflies in the act is because they tend to stay in one place when doing so.  But this was not the case with this afternoon's pair -- because a couple of times, they actually were flying about while doing it.

And funny (peculiar as well as haha) but true: upon seeing this, the Hong Kong movie geek part of me couldn't help but think: maybe that's where those behind A Chinese Torture Chamber Story and The Eternal Evil of Asia got their inspiration from... ;D
Posted by YTSL at 9:10 PM