On Peng Chau on a day with a high degree of visibility :) 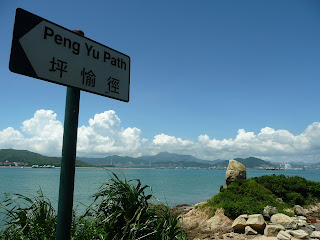 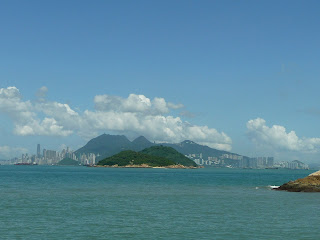 The view of Hong Kong Island is unavoidably partially
obscured by a small island -- or is it two? --
that lies between Peng Chau and it 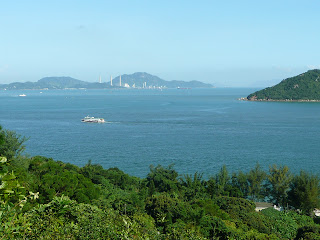 I visited Peng Chau for the first time on a gray, drizzly day a couple of years ago. Although the weather was less than optimal, I enjoyed that visit to "Flat Island" (as it's known by the locals, due to its highest point being less than 100 meters above sea level) and vowed to return again on a more beautiful day.

While today's temperature was on the high side, there's no denying that it was a beautiful day in terms of offering up bright blue skies and great visibility.  So I figured this afternoon would be a good time to revisit Hong Kong's "underdog island" (as it was so labelled by CNN Travel) -- and proceeded to do precisely that by heading out to the appropriate Outlying Islands pier in Central and hopping on a ferry!

Like on my first visit, I walked along Peng Yu Path and hiked up to Finger Hill.  But I also varied things a bit by doing such as visiting the old lime kiln/factory out in Nam Wan (South Bay), paying a pilgrimage to the old cinema in Peng Chau (which, like those in such as Cheung Chau, is sadly closed these days), and having an afternoon meal (of pork chop with fruit salad and mayonannaise, and a pineapple iced drink for a total of HK$31!) at the 1950s retro-style Kee Sum Cafe.

Something else that was different about this visit from the first was my being able to clearly see many other parts of Hong Kong from Peng Chau.  In some cases, optical illusions made it seem like other sections of Hong Kong were in fact part of Peng Chau -- this especially being so with the Discovery Bay section of Lantau that does lie fairly close to Peng Chau.

Even when this was not the case though, I often found it difficult to take my eyes off those other parts of Hong Kong because, among other things, it was fun to see them from the different perspectives offered up by being on Peng Chau!  Also, when coupled together with bright blue skies and water, they really do make for quite the splendid sight -- and I trust that you'll agree after seeing the photos at the top of this blog entry... :b
Posted by YTSL at 8:56 PM

I toured the island last month. Finger Hill is quite disappointing because the vegetation has grown too tall and covered the view of the town below. At 90+ meters only, it offers minimal challenge.

The path starting from the Fisherman's Rock (for me) is the most relaxing part of the island (nice sea views especially on clear days, nice beach, flat trails, good place to bike).

I hear you re Finger Hill -- some pruning of the vegetation would be good. What I did was stand on the base of the trigonometrical station there -- that helped somewhat!

The path you liked is Peng Yu Path. I did like that part of the island too -- but to be honest, I think the beaches in Peng Chau are not great at all, especially compared to the beaches of nearby islands such as Cheung Chau and Lantau.

Lovely to see that days with the visibility of my childhood still exist. :-)

The islands are indeed two in the second pic. In the foreground, with the beach, is Siu Kau Yi Chau. Further back in the West Lamma Channel is Kau Yi Chau.

Blue skies and great visibility does exist in Hong Kong -- though usually most consistently only in the summers.

And thanks for the islands ID for the second photo! :)