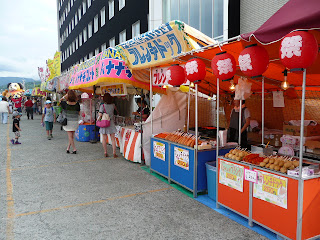 Colorful yatai (food stalls) near the sea front in Otaru 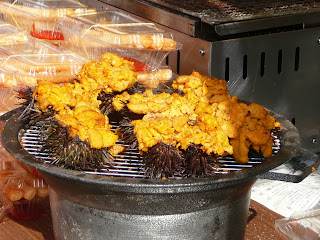 Among the offerings at the yatai were grilled uni! :O 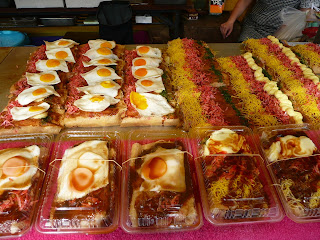 Food that actually looked even more scrumptious
than the grilled uni in the picture above it! :b
"When God closes the door, somewhere he opens the window."  Thus goes a quote from the movie I loved most as a kid -- none other than The Sound of Music!  (Confession: I've not seen it for decades but even so, I swear that I've watched it over 300 -- maybe even 400 -- times in my life!!)

In any case, and at the expense of making light of God and such, that quote came to mind with regard to the day I spent in Otaru: where shortly after finding out that the coastal cruise my mother and I had wanted to go on had been cancelled due to choppy seas, we came across -- in the same area -- festive goings-on that we later would realize was for the annual Otaru Ushio Festival.

At this early stage of the three day festival, no portable shrine parades -- or, for that matter, any parades -- were taking place yet.  Instead, what we came across was something that approximated a community talent show and various yatai, some of which were games stalls but the vast majority of which were offering up various enticing looking food and drinks!

If I hadn't been saving my appetite for an uni (sushi) don dinner, I most certainly have gone ahead and tried out a few of the delectable dishes on display.  Instead, I just feasted on the sight of them with my eyes -- and camera.  Still, while part of me is glad that I did exercise self control and thus managed to have a great dinner that day, another does wish that she had had a taste of some of the food she cast her eyes on that afternoon -- and, at the very least, am glad that I have photos to remember them by...! ;b
Posted by YTSL at 11:42 PM