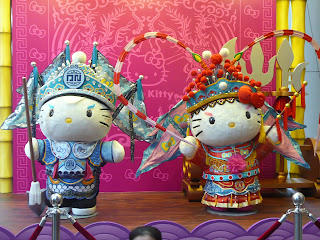 Your eyes are not deceiving you -- yes, that's Hello Kitty
and Dear Daniel in Chinese opera garb! :b 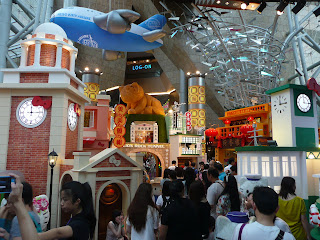 Hong Kong has got Hello Kitty-fied at Langham Place! 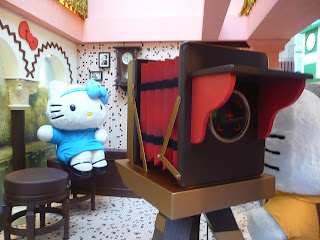 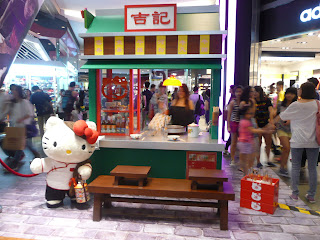 The cute cat also could be found at the Hello Kitty-fied
old time noodle stall in attired this time in amah garb! :o

Late last night, I watched my team of choice -- Arsenal Football Club -- lose its season opener for the first time in years.  Worse, even while some blame could be laid down at the feet of the match referee, the truth of the matter is that a better team could have overcome the bad refereeing to prevail against opponents who were relegation battlers last season.
So suffice to say that I was not a happy camper when I turned in for the night last night.

Thus it was that after I woke up this morning, I decided I needed to do some things to make me feel better -- so, first, I headed over to Sham Shui Po for a hearty brunch of pig liver noodles(!) at Wai Kee, then did some shopping for Hello Kitty items in Sham Shui Po and also Mongkok.  (And if you must know, I got myself a Hello Kitty camera case (to replace the one I lost recently) and water bottle this afternoon!)


Somewhere along the line, I remembered that a friend of mine had told me that there was a Hello Kitty in 1960s Hong Kong exhibition on at Langham Place -- and decided to go check it out.  Since the exhibition's been on since late July, I thought maybe it might not be so crowded any more -- this even though today's a Sunday -- but I really underestimated the Hello Kitty mania of Hong Kongers as there were a lot of people there, including many other shutterbugs happily clicking away on their cameras!

The organizers had obviously realized this would be the case, and prepared for this by having such as staff members there to work on crowd control.  In particular, they made sure that people queued up to take photos at the more popular sections of the exhibition -- which included the Hello Kitty and Dear Daniel Chinese opera display, the Hello Kitty-fied Hong Kong tram display and, most popular of all, a Dear Daniel plushie dressed as a rickshaw puller standing next to a rickshaw on which a continuous stream of people went and sat on to pose for photos taken by family members or friends.

It's not just that there were lots of people in the exhibition area that made photo-taking quite challenging.  Rather, it was that the vast majority of adults there as well as children seemed unable to resist posing with or just plain embracing and stroking the large Hello Kitty and Dear Daniel plushies about the place!  And okay, yes, I couldn't resist stroking a couple of those winsome plushies myself -- though I can safely say that I am not responsible for the dim sum bun server Hello Kitty having fur on its face that looks overdue for a wash already! ;O

The crowds in Hong Kong are hard to beat. Whenever there is/are cute or popular character(s) in public display, good luck competiting for photoshooting spots. The 100 Doraemons, the Giant Rubber Duck, the Totoro shop in LCX, Monsters University in Times Square, Gundam robots in Times Square - it is always FULL of people.

If the public exhibition is not cute or popular enough, then it will not be crowded. Just ask the man balancing a giant elephant (Pentateuque, which was on display last month). He's not cute enough. :)

Sounds like someone was in Hello Kitty heaven (minus the crowds)...

Most definitely re the crowds in Hong Kong at displays of cute or popular characters being hard to beat. But to judge from yesterday's crowd, Hello Kitty still is more popular than Monsters U and Gundam -- though I think we can safely say that the Giant Rubber Duck attracted the most people of all!

The crowds were part of the experience -- and I have to say it's always nice to see Hello Kitty being loved by so many. So I didn't mind too much -- except when I tried to take certain photos, especially of Dear Daniel rickshaw puller... ;b

I guess Hong Kong loves its popular characters. The crowds seem huge for the display.

Hong Kong certainly does love kawaii characters -- and notice that the crowd is composed of adults, not just children... ;b

Wow, more wow. How did you manage to control yourself?

Wouldn't the tram car make a great bedroom and the Star Ferry is to 'die for'.

Oh, I forgot to ask....photos of the water bottle and camera case please?

What do you mean by control myself? I did let out little squeals of delight and took lots of photo while there that afternoon!

And hmmm re your request for photos of my Hello Kitty water bottle and camera case. I think I'll take photos and just email them to you rather than subject others to the sight of them, okay? ;b

You are much more in control than I am. I would have wanted to get onto the cable car and Star Ferry!

Yes, I can understand you're not wanting to post your personal photos of water bottle and camera case. I would really appreciate seeing what the camera case looks like.

By cable car, you mean the tram? There was such a long line to get on it! As for the Star Ferry: sorry, no entry for that one!

Re the water bottle and camera case: they seem mundane... and I do have soooo many Hello Kitty items... ;b

When will the insanity end!

Hello Kitty has a lot of fans -- and probably will for years, if not decades, to come! Deal with it!!!

I did went there on a weekend between 8-to-9:30am. There's only a few people. Before the opening hour at 11am, the exhibitors set up a perimeter around the exhibit to prevent people from going in. You can even shoot the landscape of the Kitty World without any humans in the photo (except those dining in Star Bucks).

Lighting is also acceptable on a non-rainy day. Bringing a telephoto lens (135mm can do) is quite handy, to shoot subjects that you can't reach because of the surrounding perimeter.

But as 10:30am approaches, exhibitors begin to remove the perimeter. Then it is exactly as you described - swarms of people. And it becomes very hard to frame the furry rodents without human interruptions.

Wah, how long were you there for? And hahaha re your description of Hello Kitty and her ilk as "furry rodents" -- furry felines, more like! :D

Within an hour, I already finished snapping the shots I want. But it me some time to locate the other two mini-exhibits (the Daniel car and a small shop).

As you can see, I did go look for the small shop -- but couldn't be bothered with the Dear Daniel car!