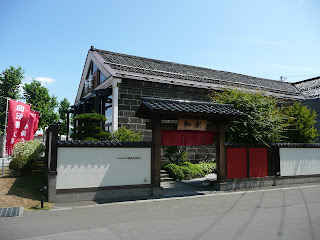 This building is home to the largest, if not ritziest,
kaiten (conveyor belt) sushi eatery I've seen in Asia 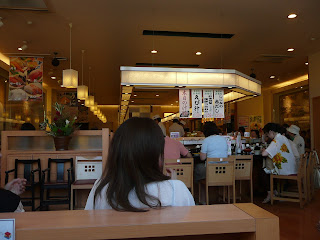 Interior shot of the Otaru branch of Waraku 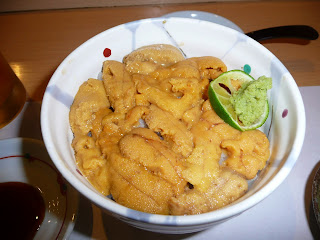 ...but it was at a more conventional sushi-ya
that I had this wonderful bowl of uni-don! :b

On the fourth day of my most recent Japan vacation, my mother and I went to the port-city of Otaru.  Before going there, the two chief things I knew about this Hokkaido locale were that: 1) it's where Shunji Iwai's Love Letter (1995) was primarily shot; and 2) it supposedly has the best sushi in Hokkaido -- which would definitely be saying something!

Although I could be said to be a movie nut, I didn't go in search of any specific Love Letter film locations when I visited Otaru.  However, I most definitely did make a point to have sushi when I was there -- and so much so that my mother and I ended up having sushi for lunch as well as dinner while in that beautiful "sea entrance to Hokkaido".

For our first meal in Otaru, we went to Waraku -- a conveyor-belt sushi place housed in the kind of building that I would not have known was home to a kaiten sushi-ya if not for the fact that my Otaru map told me where it'd be located!  Although I've seen ritzier looking conveyor-belt sushi places, particularly in the US, where places with conveyor-belt sushi are not looked upon as economical eateries (at least when I lived in that country), Waraku really did have a very nice looking exterior -- and wasn't half bad inside too!

As for the sushi: that too wasn't bad at all!  More seriously, the selection was pretty extensive -- even though not as wide and featuring as many interesting and rare items as I would have liked.  And pretty much everything I tried there was pretty good -- though it also has to be said that the uni (sea urchin) I ate there wasn't as good as the uni I had at the Susukino branch of Sushi Zanmai, a very nice sushi restaurant chain that I first ate at over at Tokyo's Tsukiji Fish Market, the previous evening.


Determined to have really good uni in Otaru, I decided to go to an actual sushi-ya (as opposed to kaitensushi-ya) for dinner -- and settled, based on location and its description in local tourist literature, on the Kitahama Sushi Restaurant located within the Hotel Sonia that's along the road bordering Otaru's picturesque canal.


When my mother and I entered the restaurant, we saw only one other customer -- but we didn't let that fact put us off as we figured it still was early in the evening (not yet 7pm, but we were already famished!).  And while I was a bit taken aback to discover the restaurant didn't have an English menu (what with it being located in a hotel and mentioned in an English-language tourist pamphlet, albeit one that had been locally issued), that still didn't deter us -- and I went ahead and ordered one bowl of uni-don each for my mother and myself.

When our order came, we decided it was good that we hadn't got up and left -- because the uni in the bowl looked fresh and, frankly, were the largest uni (not bowl, mind -- but the uni themselves!) I had ever been served!  And then when we tasted the uni... suffice to say it was the best sea urchin we had in Otaru -- heck, it was also the best uni we had on that trip (and I had six different meals with uni as part of them on this vacation!)!

Creamy, with a sweetish tinge even, and with absolutely no bitter or overly marine aftertaste.  Solid enough that one's tongue could feel and even caress each individual piece of uni.  This was truly delectable uni -- and so rich that, frankly, what had looked like too small a bowl at first glance ended up being just the right amount to truly enjoy.  And yes, I really did have a lot of great meals on this Hokkaido holiday -- but this uni-don dinner really does rank up there in terms of its memorable, heavenly deliciousness. :)))
Posted by YTSL at 11:59 PM

You are definitely an uni-phile!

I definitely love uni... but I also am a big fan of ikura and kani miso! :)