A visit to the Historic Village of Hokkaido (Photo-essay)

Last week, I finally got to visit a place that I had wanted to do so on my first trip to Sapporo back in 2008.  This was because on that trip five years ago, the one full free day I had in Hokkaido's capital city was a Monday -- and it just so happens that Mondays are the one day of the week that the Historic Village of Hokkaido is closed to the public!

Located in the Nopporo Forest Park that lies in the outskirts of Sapporo, this 54 hectare open air museum is larger and in parts more rustic in feel than the Edo-Tokyo Open-Air Architectural Museum in the Tokyo suburb of Koganei (but less so than the Korean Folk Village in Yongin City).  Boasting some 60 buildings, the vast majority of them original structures from the Meiji and Taisho periods of Japanese history (i.e., 1868-1926), it's all the more impressive that they have been furnished to look as they would have been in that era.

So fascinating is this Historic Village that my mother and I spent some five hours walking around and looking about the place on our first full day in Hokkaido this time around.  And while my favorite open air museum remains the art museum in Hakone (which I'd love to revisit some time), this one also most definitely has its charms and is one I'd recommend to those interested in historical architecture and local history... 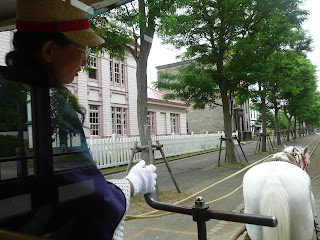 Aboard the horse-drawn trolley that runs in the summer 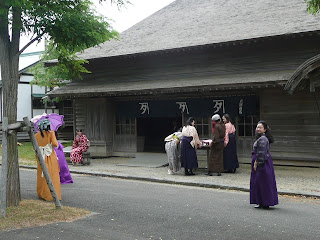 As luck would have it, the town section of the Historical Village
of Hokkaido was being used as a film (or TV show?) set that day
-- with the costumed extras definitely adding to the atmosphere! 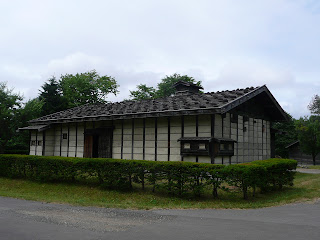 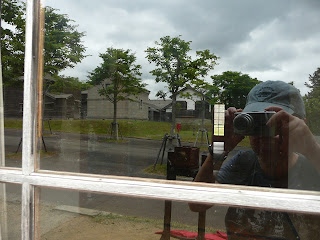 The only self-portrait I took in Hokkaido -- using a reflection
in the window of, appropriately enough, a photo studio :) 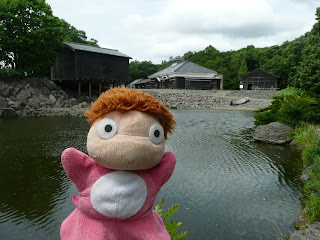 Puppet Ponyo poses in front of the fishing village section
of the open-air museum :b 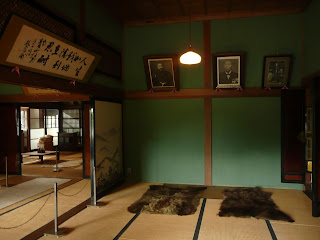 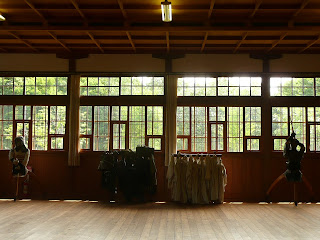 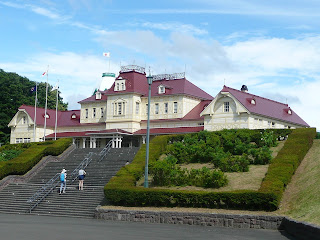 The beautiful Old Sapporo Railway Station is now used
as the museum's management office building
Posted by YTSL at 8:09 PM

Hi YTSL, this open air museum is amazing.Your photos are so cool. I liked your self portrait and puppet Ponyo. Lucky you to be there while there was filming going on. I thought at first that the extras were part of the museum for authenticity purposes. Still very cool.

A couple of friends visited Japan in May and loved it.

I agree that they did a really good job with that open air museum. Am glad you like my self portrait and Puppet Ponyo shots. And you're very welcome re my sharing -- and thanks for all your comments! :)

Your first and last photo remind me of the Western style architecture Morgan and I saw on our 2010 trip to Hakodate. The open air museum looks like fun.

How did puppet Ponyo like the crab in Sapporo? And is/was she jealous of this week's Photo Hunt of favorite mug/cup....Hello Kitty?

Please tell her I do have a Ponyo mug and she is always welcome to visit/stay with us in Vermont.

Another friend just commented (verbally to me) about the Western style architecture too. I think she was shocked to see how Western style it was! ;b

Re Puppet Ponyo: since she is from the sea herself, she doesn't eat seafood -- though she doesn't get too upset when I do, fortunately. Thank goodness too that she's not jealous of my mugs -- I keep them far away from her, at any rate!

And oh my re your having a Ponyo mug. I'm jealous -- and ditto re your invitation to Puppet Ponyo to visit with you in Vermont! ;D