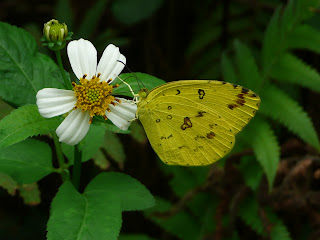 Today, I had my first sighting this year of a butterfly
known as the Lemon Emigrant :) 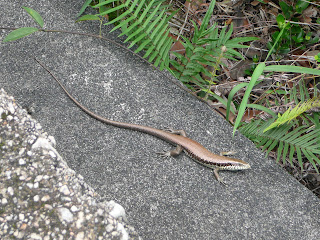 I also spotted this long-tailed skink on the hike 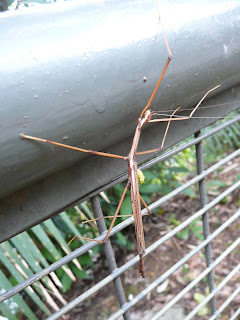 Another interesting creature out on today
was this cool stick insect :)

Early on in today's hike that took me up Mount Parker Road and then down from Quarry Gap (aka Tai Fung Au) to the Tai Tam Reservoirs, I stopped to visit the Agriculture, Fisheries and Conservation Department's Woodside Biodiversity Education Centre which opened in June 2012.  In there, I saw a live green snake along with photos of many critters that I've seen over the course of hiking in Hong Kong.


Shortly after resuming my hike, I spotted one of many interesting creatures that looked to have decided that it is already spring; this despite being today's weather still being cooler (i.e., in the high teens and low 20s on the Celsius scale) than what I've come to expect of April in the Big Lychee.


Some of these critters were too small for me to clearly photograph -- this particularly applied to the tiny spiders that wove beautiful webs that were made even prettier due to their being rain and dew drops on them this afternoon.  Others moved too quickly -- including at least one small wizard that I spotted scurrying about in a rocky area on the edge of Mount Parker.  Then there were those frogs whose loud croaks could be heard but which simply weren't visible to me.


Fortunately, some other critters were better photographic subjects -- with my hitting pay dirt in this regard when going along a quiet section of forest track that I had never previously been on, and which nobody else appeared to be on when I was on it this afternoon.  First, one butterfly fluttered by, then another, and yet still others -- including a female Lemon Emigrant that I got pretty excited to have spotted for the first time ever.


At one point, three butterflies looked to be fighting to rest on one single small flower, only for the Lemon Emigrant to somehow get sole landing rights for it!  And as if that weren't enough excitement for one afternoon, a few meters further along the forest track, what should I spot but a long-tailed skink hanging out by itself on the side of the path!!

After I got to a part of the trail that was part of the Hong Kong Trail and consequently trekked on by a number of people, the critter spottings tailed (no pun intended!) off.  But near the end of my hike, I spotted a stick insect hanging from a gray railing!  Funnily enough, no one else seemed to have noticed it.  So I had it all to myself to photograph -- something that, I have to admit, made me uncommonly gleeful!! :b
Posted by YTSL at 10:45 PM

Great pics! But sounds like someone needs one of those cameras used for sporting events to capture those fast-moving critters!

Haha, it's not that I need one of those cameras with fast captures but, rather, I need faster reactions -- in that by the time I think to take a photograph of some of those critters, they've already disappeared from sight! ;b