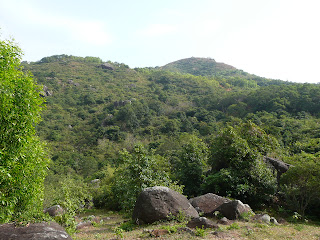 Ever looked at a hill and wished you could climb
all the way up to its peak? 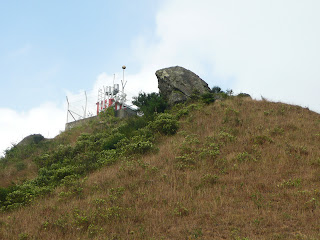 On a previous hike, a friend and I came so close to the top
of the hill to the right in the previous photo, only to find that
the trail that we were on didn't go all the way up it 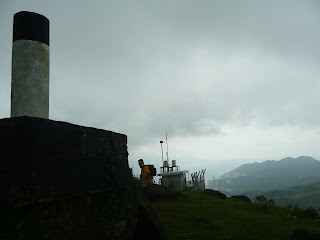 Today though, my hiking companion and I accidentally
came across a trail that led all the way up
474 meter high Shek Lung Kung 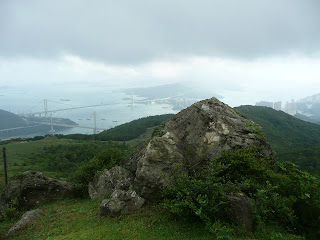 Even on an afternoon where storm clouds threatened,
the panoramic 360 degree views from the top
of Shek Lung Kung were very impressive indeed :)

A friend who has lived in Hong Kong for six years now started going hiking with me last September.  This afternoon, we went on our 25th hike together.  Several hikes ago, as I was telling him the proposed route for a particular excursion, he -- who I met through a mutual passion for Hong Kong cinema -- told me, "I get it, we're doing director's cuts of previous hikes you went on!"

While I couldn't help but laugh at his comment (and particular choice of terminology), I have to say that he does have a point!  For it is indeed true enough that I have gone on some hikes with him that essentially followed trails that I previously had been on before (with other people), only I often add something extra or make a change or two to the route this additional time around to make the hike more interesting.

As an example, this Sunday, I took my friend along the Lin Fa Shan to Yuen Tsuen Ancient Trail hiking route (which, its name notwithstanding, actually begins at Tsuen Kam Au a few kilometers northeast of Lin Fa Shan) that I had been on a couple of times previously (as the photo-essays here, here, here and here show).  But rather than go along the exact same route in this now familiar area of Tai Lam Country Park, this afternoon, we first sought out the fire lookout post that Ulaca had written about and checked out the panoramic views to be had from a few meters higher up that particular hill before back-tracking a bit and heading southwards to Lin Fa Shan, then ended up going up to the top of Shek Lung Kung rather than round the side of the hill like on my previous hikes in the area.

I have to say that I feel a particular sense of satisfaction at having finally hiked up to the top of Shek Lung Kung. And yes, there are 58 Hong Kong mountains and hills higher than it.  Still, it's one more Hong Kong hill with a trigonometrical station that I've now been up to -- woo hoo! -- and as an added bonus, this hill also is one that has a navigation beacon or light and signal station atop it!

And, actually, while climbing up to the top of Shek Lung Kung was cool, I derive more of a sense of achievement from successfully getting down it as in doing so involved my overcoming the fear I often get -- when seeing step-less steep slopes -- that I'll slip and fall off the hill!  This all doesn't mean that I want to attempt to climb up and descend from Sharp Peak any time soon, mind.  Still, today's experience did help me to take one more step on the road to becoming more confident about going down steep slopes after the low of that which to my mind remains "the hike from hell" -- and for this, I want to say "Thank you for your help and patience" to my hiking companion this afternoon once again!  :)

I know I would of rather went on hike but instead hubby and I went and got firewood...coffee is on.

I'm glad you think so. I was ruing that the photos really don't do the actual scenery justice but decided to put them up anyway to help illustrate my comments. :)

Well... you went and got firewood over the weekend but could go hiking next weekend maybe? ;b

You could develop a little tour business you know, Hong Kong hiking and film...I'm seeing all sorts of gimmicks. I would take that tour.

I do sometimes fantasize about having a tour business in Hong Kong. But alas, I don't think there'd be many takers for my services! ;(