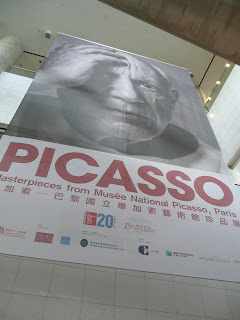 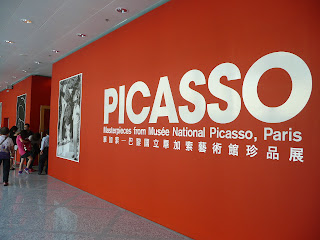 Picasso: Masterpieces from Musee National Picasso, Paris
is the official title of this exhibition that runs through to July 2012

A couple of weekends ago, I went and checked out the exhibition of 56 Picasso paintings and sculptural works (and also 41 documentary photographs and 1 video about the late Spanish artist) that is currently on at the Hong Kong Heritage Museum.  A couple of weeks before my visit, I went to the URBTIX counter at the Hong Kong Cultural Centre to book a ticket for one of the show's viewing sessions.  (Due to the exhibition's anticipated popularity, admission was restricted to a certain number at each given time slot.)

Perhaps because I spoke to her in English (instead of Cantonese), the woman manning the counter must have assumed that I was a tourist.  I surmised this because as she handed me my ticket, she asked somewhat anxiously, "You do know that the exhibition is being held in Shatin, right?"!

An alternative interpretation might be that she wanted to make sure that I knew that the Picasso exhibition was being held at the Hong Kong Heritage Museum rather than -- as might conceivably be more expected -- the Hong Kong Museum of Art (which, incidentally, is located just a few minutes' walk away from that URBTIX counter).  But, then, this is just one of the curiosities about this exhibition that's part of the 2012 Le French May programme but still is running in June and will only end in late July!

A knowledgeable source told me that the Hong Kong Heritage Museum is playing host to this exhibition of works from the Musee National Picasso (which currently is closed to the public until the summer of next year on account of renovation work being carried out on it) because it's the Hong Kong museum with the largest exhibition halls.  And while it's true enough that Picasso art works have little association with Hong Kong heritage (and vice versa), the same could be said of the work of Pixar and this time last year, this same New Territories museological institution -- and precisely the same galleries within it -- did play host to a super popular Pixar: 25 Years of Animation exhibition.

As it so happens, it rained the day that I went to view the Pixar show -- so the crowds were smaller in number than usual for that exhibition.  Unfortunately, I had no such luck on the afternoon that I went to check out the Picasso exhibition -- and in fact, the huge, jostling crowd in the first two galleries I went into threatened to spoil my museum going experience that day.  (Put this way: it was hard to get complete, unobscured glimpses of any of the works installed in those galleries -- and things were not helped at all by the presence of a guide and the numerically large group of people standing around straining to listen to her pearls of wisdom.)

Fortunately, despite my contemplating doing so out of sheer frustration, I didn't end my visit after going through the connected Thematic Galleries 3 and 4.  For after I exited into the corridor from Thematic Gallery 4 and walked a few meters to the entrance of Thematic Gallery 5 (which is separated from the other two galleries by the Chao Shao-An Gallery that's home to a different exhibition), I discovered that many visitors to the Picasso exhibition didn't seem to have realized that that show continued into one more gallery!

In this case, many people's loss was most certainly a few people's gain.  For those few of us who continued into Thematic Gallery 5 found ourselves with ample space to not only get wonderfully unobstructed views of the paintings and photographs on the gallery's walls but also able to walk a full 360 degrees around the sculptural works on display in that large room!

And for the record, I don't think it coincidental at all that my favorite painting (Claude Drawing, Francoise and Paloma) and sculpture (one of a bronze cat simply entitled Chat (i.e., the French word for cat)) of the show are on display in Gallery 5 (rather than 3 or 4).  For let's face it: however good a piece of art, one does need good conditions to be able to (better) appreciate it -- and those good conditions do include there being ample space between a viewer and other people in the room as well as sufficient space between a viewer and the works of art he or she views!

YTSL, given that the Musee National Picasso is closed for renovation, the French decided to take advantage of the closure. In conjunction with museums worldwide, selected works are now doing a world tour. I don't know the full itinerary, but I can tell you that immediately prior to its arrival in Hong Kong, the collection was on show at the Museum of Contemporary Art, Chengdu, China. After Hong Kong, the collection moves on to Kuala Lumpur.

Going to see it this week, thanks for the tip about gallery 5. I also think that there is a deliberate decision to host the exhibition at the heritage museum in Sha Tin - it spreads out the HK cultural experience away from the obvious Central-TST areas. The same logic applies to the HK film archive in Sai Wan Ho, the JCCAC in Shek Kip Mei etc.

To be sure, there's some geographic sense about having the exhibition in Sha Tin rather than Central-TST but my feeling is that the Picasso exhibition is first and foremost an art exhibition, so a more appropriate venue for it would have been the Hong Kong Museum of Art.

Catching up with my blog reading so I am a couple of weeks late here but I wanted to comment on the difficulties you had with the large tour groups accompanied by guides.

That seems to be a very strange way to run a hugely popular exhibit which describes just about every Picasso show anywhere in the world for the past forty years or so.

Self guided tours with commentary on rented players with earphones or even wifi commentary to smart phones is much better--those who want a guide can go at their own pace and those who don't aren't stuck behind big groups.

One hopes that those new to museum attendance (blockbuster exhibits are great for selling memberships to neophytes) weren't so disappointed that they wouldn't return.

Thanks for commenting on a blog entry that's older than a week. (And for those who wonder, blogger does help me to notice comments on old(er) blog entries!)

And I do agree with you that self-guided tours with commentary on rented players with earphones or wifi commentary would be so much better than a live guide for exhibitions like the Picasso one that has been installed in space that isn't that great at accommodating large crowds.