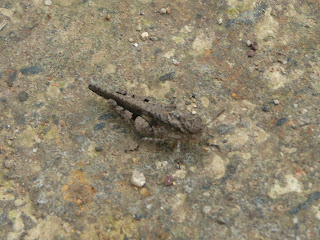 Hard to spot but it's there: A grasshopper that's
barely visible against a sandy-pebbly background 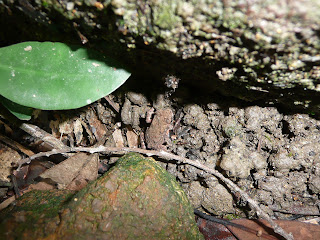 Can you see the toad in this picture? 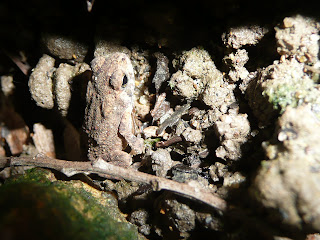 A more close-up view might help -- but what I reckon really
makes a difference is when its eyes are opened more widely!

On my way back from a post-hike dinner this evening, I received a text message from a friend who told me of her hiking group having been attacked and stung by some unknown insects earlier in the day.  I really felt for her -- especially since just two weeks ago, she had told me of the group she had been hiking with that day having been stung by bees while out in a different section of the Hong Kong countryside.

Touch wood but the only time to date that I've been stung by a bee was years ago when I was living in Philadelphia.  And the creatures I encountered while out hiking earlier this Sunday in Sai Kung East Country Park were, for the most part, either trying to get far away from me (and out of my camera's range) or hoping that their camouflaged natures would mean that I would not see and bother them!

To be sure, spotting some of these camouflaged creatures is one thing and snapping photos of them that are to my satisfaction is another thing entirely. And I have to say that one small green bug in particular left me feeling pretty frustrated this afternoon because it happened to have chosen to settle on a small leaf that kept on being blown by the wind and consequently never stayed still enough for me to get the photo(s) of the bug that I wanted.  (So much was the leaf blowing that I noticed the insect clinging on to the leaf's twig with its antennae as well as holding on to the leaf itself with at least a couple of its legs!)

Rather than dwell too much on that though, I'll console myself by pointing out that I did manage to take a number of non-blurry photos of other critters I spotted on today's hike -- including those at the top of this blog entry.  Looking at the third photo, I'm reminded of a lovely Enid Blyton story I read as a child about a rough-skinned toad thought ugly until one's focused on its eyes and realized how beautiful they are.  I wish I could remember that tale's title (not least so I could cite it as one of those really cool stories by an oft criticized author) -- but in any event, I want to say after all these years, "Enid, you're really right!" :)

That's the best camouflaged toad I've ever seen. Hehe...I won't say how long it took me to see him......

Are grass hopper sure look different then ours do here. Most of the grasshopper are use for fish bait and the coffee is on.

Did it help to look at the third photo before going back to try to spot the toad in the second/middle photo? ;b

There are a variety of grasshoppers here in Hong Kong. Some are far more green as well as bigger.

E.g., go here and scroll down to the last two pictures:-
http://webs-of-significance.blogspot.hk/2011/12/from-twisk-country-park-management.html

Great photos! I love the toad - you're right, the eye helps a lot, What a beauty!

Thanks -- and I'm so glad you managed to spot the toad with the beautiful eyes. :)