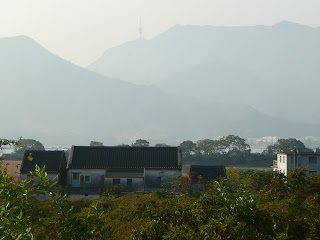 View from Kuk Po, Hong Kong,
across the border to Mainland China 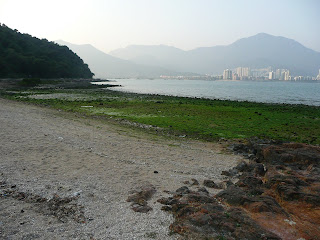 Just one more from the over one hundred photos
I snapped over the course of the hike I went on today
Earlier today, I went on a hike that took some 7 hours to complete -- if you include a short lunch break midway through. So am on the tired side -- to say the least! -- but still don't want the day to end without my writing a bit about the hike up in the northern New Territories that took two friends and I from Wu Kau Tang to Luk Keng via Lai Chi Wo, an isolated but well preserved village famed for its fung shui woods that I have long wanted to visit.

On the last leg of the estimated 15 kilometer hike, we were treated to views of Starling Inlet (AKA Sha Tau Kok Hoi) and, across it, the border town of Sha Tau Kok and the Mainland Chinese city of Shenzhen. On at least a couple of levels, these made for surreal sights and experiences.

For one thing, Starling Inlet and Sha Tau Kok are within the Frontier Closed Area of Hong Kong that Hong Kong residents (besides those who reside in those areas) are generally barred from entering. For another, like other parts of Mainland China, Shenzhen is a place that the likes of me require a visa to enter. Thus it was that I was gazing out at places -- and within touching distance in the case of the Starling Inlet -- that I technically cannot enter without getting official permission from Hong Kong proper.

In addition, it just happens to be so that the part of Hong Kong that I was in is on the rural -- if not naturally wild -- side whereas the part of Mainland China across the water is one of the more physically developed sections of the territory. Thus it was that I found myself gazing out at the kind of built-up area one tends to associate with Hong Kong -- but which actually is not in Hong Kong -- from the kind of rural area in the territory that is a very far cry indeed from the high density concrete jungle that many people think that all of Hong Kong is. Alternatively put, what an inversion of stereotypes -- but also a fearful visualization of what is to come years from now -- when Hong Kong it is that looks like the backwater vis a vis Mainland China!

Yeah, from a little bit after 11am to a little bit after 6pm. I think it's my 3rd lengthiest -- time- and distance-wise -- since moving to Hong Kong -- with only the Shek Pik Reservoir to Tai O and Yuen Tsuen Ancient Trail hikes being lengthier!