This blog entry is one that I feel obliged to put up more for myself than for family or friends. Put another way: Even though my first and second Northeast Hong Kong hike photo-essays have attracted a grand total of one and zero comments respectively, I'm going to go ahead and put up Part III -- for the sake of completion and, also, for my own records. So, without further ado, here are a selections of photos taken on the part of the hike that covered Sam A Tsuen and back towards Wu Kau Tang on a different, more hilly trail before diverting to Hong Kong's famous Bride's Pool and nearby Mirror Pool; natural beauty spots that many people living in Hong Kong for years have not ventured to -- their loss, really! 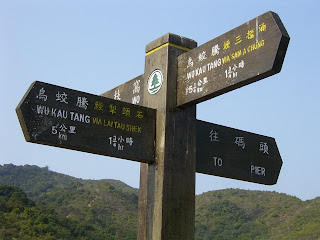 One of the things that made Hong Kong's Country Parks
feel so safe to hike with just a friend or two:
its preponderance of clear and helpful signposts 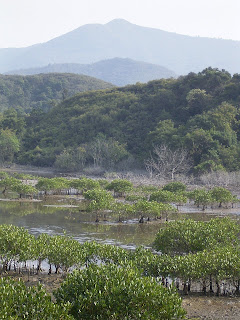 On a hike through diverse geographical landscapes,
my hiking pals and I now passed a marshy/swampy area
located near Sam A Tsuen and the sea 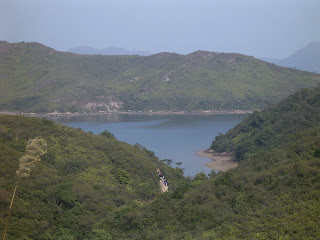 A few -- okay, maybe not so few! -- meters up later,
we were presented with this view of land and sea 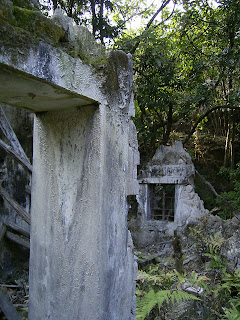 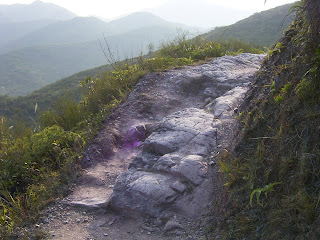 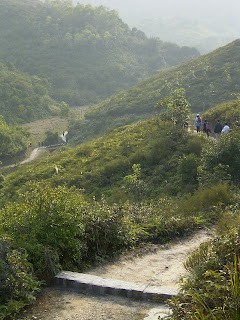 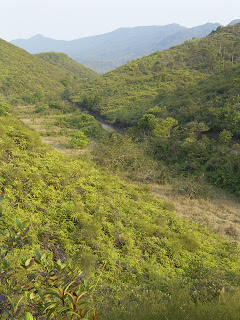 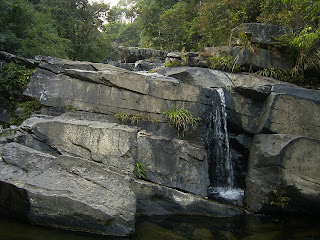 Lower part of the Bride's Pool --
alas, by the time we got there, the lighting wasn't optimal
and my hands were shaking too much from fatigue,
so that good shots of the upper part of it
will have to wait for another visit! ;(

So you use the number of comments as a barometer of a post's worth?

Maybe people just like the beautiful pictures and can't think of anything more to say? Kind of a Zen thing.

Still, no harm in posting for your own benefit, eh? Like an online archive...

"So you use the number of comments as a barometer of a post's worth?"

I must admit that that's an influence. E.g., all those Photo Hunter visits does help keep me interested in continuing Photo Hunting. And after getting the distinct impression that the majority of my blog visitors didn't care for my Arsenal posts (and they weren't attracting new readers), I've not written much about Arsenal... :S

"Still, no harm in posting for your own benefit, eh? Like an online archive..."

My thoughts exactly re my hiking photo-essays! :)

The abandoned village in your earlier hike post was creepy and wonderful. Was it weird walking through the village where no one lived? Makes me shiver.

Thanks and if you don't mind me asking: Did you enjoy Part III more than Parts I and II?

Re the abandoned village: It didn't feel weird because I was with other people and it was in daylight. If I had been alone and it night though... ;S

I like all three parts and don't know why I didn't comment on them. The purple rocks are very cool and I always enjoy photos of water.

I think the photo I like the best is the abandoned personal belongings. Why haven't they been stolen? Did you take closer photos of the photographs? Some of the stuff I can understand leaving but photographs. Almost like they left in a hurry....who know........

Thanks for your comments. Find them interesting and helpful.

Re your question as to why things haven't been stolen: A couple of reasons I came up with is that, for one thing, it does take a bit of a hike to get to those abandoned dwellings and for another, many local Hong Kongers have a thing about second-hand/used stuff -- thinking it bad luck to own, etc.

As for why the residents didn't take away the stuff: Yeah, like you, my impression was that they left in a hurry... But why, I don't know.