The Lin effect -- Brigitte Lin, that is! 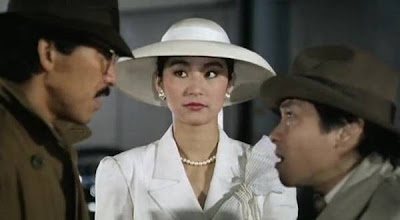 Even when she's in the background, Brigitte Lin Ching Hsia
can't help but stand out in a picture!
For much of this month, much of the world (including myself, actually) has been in the thralls of Jeremy Lin mania -- Linsanity, as the phenomenon has been termed. But long before Jeremy Shu-How Lin first appeared on the professional basketball and pop culture scene, another Lin with Taiwanese roots had captured my imagination and carved a place in my heart.

I first experienced Brigitte Lin Ching-Hsia mania back in the late 1990s when I was still living in Philadelphia and rediscovering the magic of the cinema of Hong Kong after years of not having given the territory's movies so much as a single look. One fateful day in a Philly Chinatown video store that was a veritable treasure trove for a filmophile like myself, I rented VHS tapes of Peking Opera Blues and Boys Are Easy without realizing that they both starred the actress known to much of the Chinese speaking world as Wondrous Beauty -- and consequently went through what really could be described as a life-changing experience.

Put another way: Brigitte Lin Ching-Hsia played a not insignificant part in leading me to return to Asia, change career paths and eventually move to Hong Kong itself. So it's rather ironic -- even if somewhat explainable in that my favorite actress of all time (and in the world wide world!) hasn't appeared in a new movie since 1994 -- that I actually haven't had many opportunities at all to view her films and her on a big screen here in the Big Lychee.

Last Friday evening, however, saw me attending a screening at The Grand Cinema of All The Wrong Spies courtesy of Schoolmates Culture Club's Teddy Robin Panorama -- and I'm really happy to be able to report that the screening took place in a pretty packed house filled with a wonderfully receptive audience that got me thinking once again that one of the best cinematic experiences involves roaring with laughter and generally enjoying a comedy with people you may not have much in common with besides a shared appreciation of a particular film's rib-tickling moments.

The 1983 spy comedy that was Teddy Robin Kwan's directorial debut effort is admittedly not perfect -- not least in terms of its wince-inducing final joke. Set in 1938, the zany movie's story involves various people and factions trying to get hold of a secret hydrogen bomb formula that was stolen out of Nazi Germany by a Jewish scientist who wants to put into the hands of the Americans but somehow ended up in Hong Kong and lots of trouble.

Initially, the focus is on the film's two leading men, George Lam along with director Teddy Robin Kwan. But once Brigitte Lin Ching-Hsia appears on the scene, she easily steals the show. To his credit, the film's director fully recognized the beautiful asset that this great actress was -- and played up her beauty to the hilt (e.g., when his character first sets eyes on her, he literally is moved to float several feet up in the air!) as well as gave her ample opportunities to shine and sparkle (again, sometimes literally!!). And almost needless to say, the movie's star actress really did go ahead and show off her charisma and talents with great aplomb.

Watching the movie with a knowing audience (i.e., one familiar with other films in which many of the people with prominent roles in it have made), it was fun to hear the chuckles when Tsui Hark and Brigitte Lin Ching-Hsia sparred on screen in one scene -- and, in particular, when he made a gesture that got people recalling another 1983 movie, Zu: Warriors of the Magic Mountain (which he had directed and she had been its lead actress) -- and she showed how handy she can be with a whip (10 years before she would wield that weapon with great panache once more in The Bride with White Hair).

Re-viewing All the Wrong Spies for the first time in years, I also got to thinking again that this movie must have planted some seeds in Tsui Hark's imagination that would bloom three years later into Peking Opera Blues. For, without wanting to create "spoilers" for either movie, here's pointing out that Brigitte Lin Ching-Hsia shows in both these films that she is very good indeed at playing the kind of characters who can assume multiple guises and are far more multi-layered and deeper than they often are initially given credit. And even while Peking Opera Blues is undoubtedly the finer cinematic work, I also do sincerely believe that both these films owe a significant percentage of their "watchability" to her very presence in them! :)

Excuse the pun, but I'm very linvious that you were able to watch one of my favorite Brigitte Lin films on the big screen. Like you said, All the Wrong Spies is not perfect, but it really is a funny and fabulous movie—and a must-see for Linsaniacs if only for all of the gorgeous outfits that she dons. Plus, the film really does provoke roaring laughter, even when viewed alone at home on the small screen. It still makes me chuckle whenever I think of that ballroom tango scene! :D

I didn't know before that "All the Wrong Spies" was one of your favorite Brigitte Lin movies! And have to agree with you that she does wear lots of gorgeous outfits in it. :)

Sounds like a fun evening. Like duriandave I envy your living in Hong Kong where you can see a film with Brigitte Lin on 'da big screen'. I'm happy the film attracted a good sized appreciative audience too. Gorgeous outfits....this woman would look good in any outfit she wore.

It was a fun evening indeed -- especially since after "All the Wrong Spies", I took in another old Hong Kong movie with Teddy Robin Kwan connections in the form of "Cops and Robbers". ;b

Nice post. I've always wanted to see POB. I guess I have to search harder.

Wow, I didn't realize you had yet to view "Peking Opera Blues"! Yes, the film's highly recommended -- and nowadays, you actually can get DVDs of the film that have way more serviceable English subtitles than the ones I saw on the first few home video versions -- and, alas, also the celluloid film print -- of the movie that I've seen.