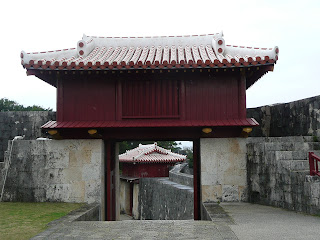 Pass through these gates that are part of Shuri Castle... 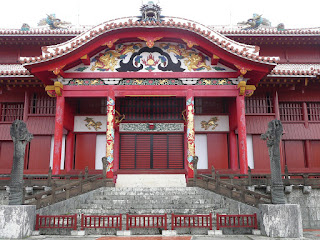 ...to get to inner sections of this complex, including
the ornate Seiden (Main Hall) of the castle complex 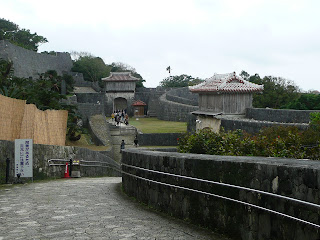 Although it may not look like so, pretty much all
that you see at Shuri Castle are reconstructions
due to the castle having been reduced to ashes
during the second world war
Once upon a time, Japan was home to hundreds -- thousands even -- of castles. However, few of those castles exist today -- with close to 2,000 having been dismantled or destroyed during the Meiji period alone.

The general consensus appears to be that there are just 12 original castles left in The Land of the Rising Sun. Although little of what the visitor to Shuri-jo beholds is actually original (on account of much of this complex having been destroyed during the second world war), he or she can take solace in the reconstructed Ryukyu royal palace nonetheless being part of the UNESCO World Heritage listed sites on the Okinawa Islands.

As outlined on UNESCO's official site, Shuri-jô (Shuri Castle) built in the second half of the 14th century, was the main castle of the kings of Chûzan and, after unification, of the Ryukyu Kingdom. The hill on which it stands dominates Naha City and its port. It is divided into inner and outer enclosures, conforming with the topography. The castle's enclosure walls, built with random bonding of coralline limestone, extend over 1,080 m.

From what I could see when I visited the complex on the final full day of my recent Okinawa vacation, the castle's restorers have done a splendid job. To be sure, this former royal residence actually is generally more modest in decor than I expected -- but it occupies a commanding location atop a hill and a space that is so large that my friends and I didn't actually cover all of its grounds despite spending several hours there.

A visit to Shuri-jo also helps one to recognize how substantial was the cultural as well as political influence of imperial China on the Ryukyu kingdom for centuries. Thus it is that even though Okinawa is officially part of Japan nowadays, my two friends with whom I met up with this past holiday were agreed that this part of the world actually felt more like a cross between Japan proper and Taiwan than other parts of that East Asian country that we have visited.

At the same time, despite more than one source having described Shuri Castle as being reminiscent of, inspired by or resembling the Forbidden City in Beijing, I saw little at the Okinawan site to remind me of that truly magnificent and sprawling Chinese palace complex that I visited some years back (but whose photographs I took of it I've sadly lost!). For what it's worth though, I also don't think that Shuri-jo is all that similar to other castles I've visited, including the beautiful Himeji Castle.

Instead, this Okinawan castle is one that seemed to me to have its own unique touches and identity -- and I really am glad that it has been restored to something approaching its past glory and open to the public to appreciate and learn some episodes of Okinawa's colorful history from.

I too thought the restorers did a good job. To me the outside had an old feel to it. Also I enjoyed the way the indoor exhibits were presented as we walked from area to area of the Castle. And not once while touring Shuri Castle did I think Forbidden City.

I agree with your thoughts re Shuri Castle. Re the outside -- especially the walls: I thought they were the original ones... until I saw the photos of the second wold war devastation at that locale...