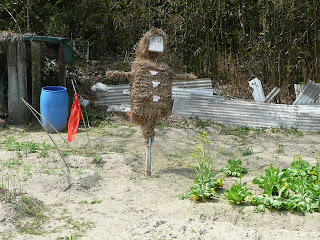 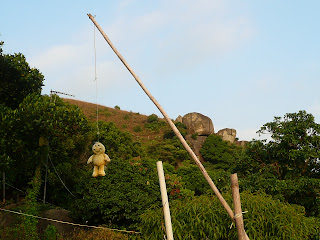 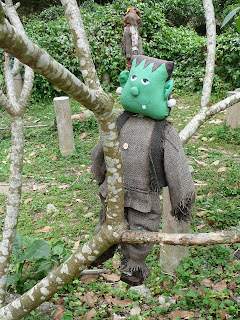 More specifically, the photographs at the top of this blog post are of guardians of cultivated patches of land I've encountered over the course of hikes in the Sai Kung Peninsula, northwestern Hong Kong and Lantau Island respectively.

Not your usual generic scarecrows in appearance, I have to admit that the sight of them all caused me to double up with laughter. Also, while the figure in the second photo looks more suited to be a child's beloved plush and the figure in the third photo's maker clearly was inspired by the Frankenstein monster, I can't fathom out what the maker of the figure in the first photo wanted his or her patched up creation to resemble (if anything besides something humanoid enough to scare off pests).

Does anyone of you have any ideas? If so, feel free to submit them in the comments section of this blog entry! :b

That is a neat take on the theme. Some nice patches there.

Am glad the patches are to your liking. :)

We rarely see them around here, any more. I think I have seen one this summer.

What a fun take on the theme. I can't wait explore the Hong Kong trails in search of patches of local culture.

HA, these are the funniest scarecrows I've ever seen. Great collection!

Hi YTSL, great photos and take on this weeks theme. I'm so glad they didn't scare you away so you could snap their photos and share them with us. Very funny take on the theme. :)

those are cute and funny scarecrows but the first one looks really creepy.

I love these patched up scarecrows. Too funny. Looks like this is how they get their creative sides out.

Nice take on the theme.

I have to say that it's been a nice surprise to see these scarecrows about in Hong Kong. :)

You're coming over in November, right? That should be a good time for hiking. :)

Glad I got you laughing with the photos. :b

I'm just glad that I managed to stop shaking with laughter enough to take clear shots of those scarecrows! ;b

Hmmm... does the first one remind you of a (particular) character from a horror movie then? ;b

Creative is the word for them -- as well as funny! ;b

Interesting interpretation of the theme for this week.

I love the monster scarecrow dude! I would have one just like it because it is quirky and fun :)

Some funny patches indeed. And my nephew is nicknamed Patch, but his name is really Patrick.

Do you mean the Frankenstein monster or the scarecrow in the first photo? :b

I figured Patch was a nickname -- but was wondering what name it was derived from! Seems we both went for a bit of humor in our Photo Hunt entries for this week. :)

Nothing like that here or least I haven't found it.

Excellent not one looking like Wurzel Gummage! Those are wonderfully creative scarecrows!

The scarecrows are so cute! Not a common sight to see them in Asian fields. :)

Scarecrows are not all that common in Hong Kong either -- but think I've definitely encountered some fun ones. :)

I'd like to think their creators had fun making those scarecrows. :)

I remember as a kid seeing scarecrows in Penang but they later got replaced by rows of cans on a string that could be tugged to make lots of noise. Maybe more effective but not so visually fun!

*smile* I love your patches of local culture. What a great take on this week's theme.

Thanks for appreciating my take on this week's theme. :)

I love your idea for the theme :-)

Am glad it meets with your approval. :)