"Never hike alone." That's an injunction that I find in more than one of my Hong Kong hiking books. And after I discovered that there are sections of the Big Lychee where there is no mobile phone reception, and hiking trails which can be unexpectedly perilous, I've generally obeyed that rule. But what, then, is one to do on a hot but clear summer's day, when I have the itch to go for a countryside walk but can find no one to go on it with?

In the case of one such day last July, I took myself to the Clear Water Bay Peninsula for a stroll along its relatively traffic-free main road from the bus terminus near the Clear Water Bay beaches down to the Tin Hau temple at Joss House Bay (AKA Tai Miu Wan) that is considered to be one of Hong Kong's oldest, if not the very oldest... only to find upon getting there that that ancient temple was undergoing major renovation (that I happily found to have been completed on my most recent visit to the area)!

Still, after seeing the following photos, I think you will agree with me that the excursion wasn't completely fruitless. Also, while it was not rugged enough to be considered a true hike, the walk still made for enough of a sweaty exercise on a day that was largely hot and sunny to make me feel like some good effort had been put into the whole affair. (And although storm clouds appeared near the end of my excursion, they fortunately turned out to only produce a few minutes worth of showers and thus weren't enough to rain on my parade!) 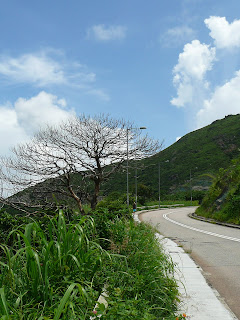 Bright blue skies and an open road to follow
spells bliss for me on a free Sunday! 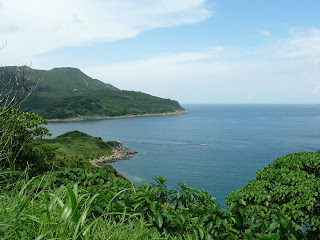 View of Clear Water Bay and, in the far distance,
Tai Leng Tun -- the 291 meter high hill
I had hiked up some months back 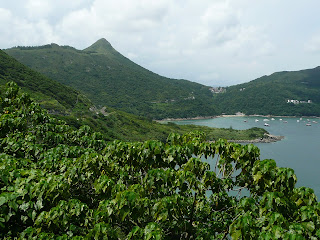 View of the Clear Water Bay Peninsula that includes
its most recognizable hill/mountain-top: High Junk Peak
("one of the three treacherous peaks in Hong Kong") 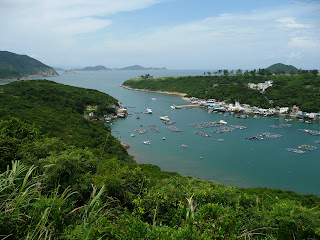 Looking seawards, one sees a tamer sight:
a fishing village on Po Toi O and part of the greens
of the Clear Water Bay Golf and Country Club 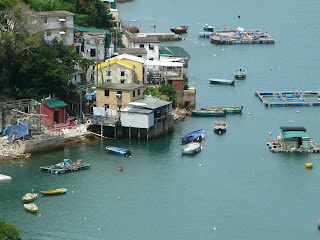 Proof positive that not every building
in Hong Kong is a high rise ;b 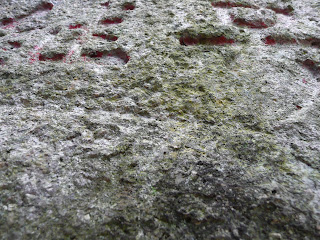 It may not look like much, even up close, but
this rock inscription actually dates back to 1274
and is the oldest dated inscription in Hong Kong 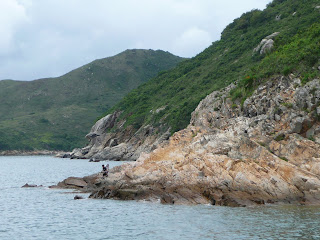 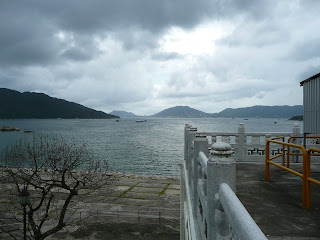 I got a pretty impressive view of the gathering storms
from the Tin Hau Temple at Joss House Bay
which I'd like to visit again on at least one
Birthday of Tin Hau Festival
Posted by YTSL at 9:35 PM

Great photos. I've done that hike again a couple'o times, as it's not too far away from the university.

If you're interested, I'd be happy to join a hike, especially if it's the place's that gorgeous... ^_^

Hmmm... that's a walk, not a hike, as far as I'm concerned. OTOH, the High Junk Peak Country Trail IS a hike -- and a really cool one at that! ;b

And thanks for the offer to join a hike. If you're into scenic hikes, pausing and taking in the scenery (and taking photographs of it) and being patient with people who aren't too fast, then... hey, yes, maybe we should hike together some time. ;b

Yep, I think the kind of hike you're describing is exactly my style.

Do let me know next time you feel like someone joining you for a hike...

You always make me wish to see Hong Kong. Alas, I'm unlikely to make it, so I'll have to be content with your beautiful photos.

To be honest, I'm pretty lucky in that it's actually quite rare these days for me to not have someone to hike with when I'm so inclined. But thanks for the offer and hope you enjoy great hikes in Hong Kong -- and yes, best to not go it alone! :)

I hope you'll get to Hong Kong one day. But in the event that it doesn't happen, am glad that my photos are helping you to appreciate the place. :)