Ten days after I went on a hike in Tai Tam Country Park one hot July day, I was back there again -- this time with two hiking companions rather than just one. This time around, the weather also was quite different. Indeed, this is a hike that I've come to think of as particularly memorable because of the weather we encountered on it.
For as we rode the bus to near where the hike would start, the rain began absolutely pelting down. But as we neared the stop that we needed to get off at, the rain suddenly stopped. At certain points during our hike, it would do the same again (i.e., suddenly pour with rain, then just as suddenly stop). At other times, we encountered strong winds. At other times, the weather would seem fine -- complete with beautiful blue skies.

So, all in all, we concluded at hike's end that this had been a nice conclusion... only to discover upon returning home and doing such as checking the weather forecast on the Hong Kong Observatory's website that Typhoon Signal Number 3 was in place (and had been for at least part of the time that we had been happily hiking)!!! 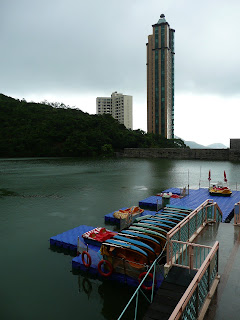 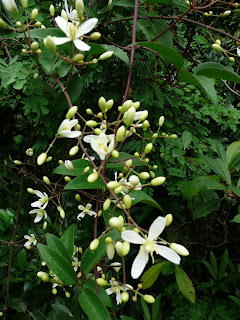 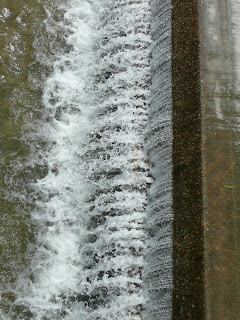 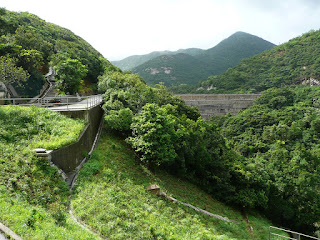 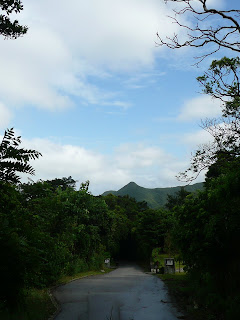 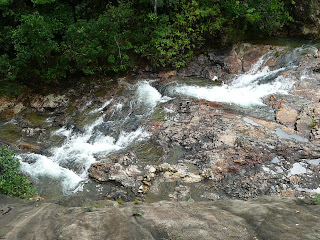 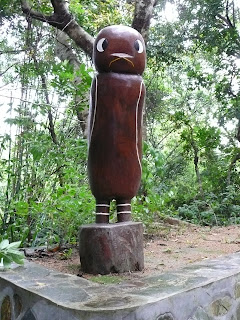 Why a wooden statue of a cross-eyed bird
should signify that a barbecue site is nearby
is something only the park authorities know! ;D 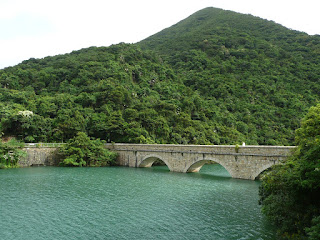 As this picture shows, July is a time of the year when
Tai Tam Tuk Reservoir is pretty full with water

Impressive pictures. The Tai Tam Tuk Reservoir looks really full, especially with a typhoon on the way. I realize that as it fills the amount of water needed to raise the level of the lake by one inch gets very large (if that make sense) but with the water ready to lap against the underside of the bridge it looks full enough.

That isolated looking apartment tower in the first picture must have some striking views. Any building of any height at all, as long as there isn't another building in front of it in Hong Kong must have great views. That half-round antenna on the roof looks a bit like it dropped off a visitor from outer space.

Lovely pics! Nothing like a good rain to clean the skies.

Not to worry, I know what you mean about the high lake level...

And yes, there indeeed are lots of buildings with great views -- because they're not only tall but in a high location. But, truth be told, unlike many Hong Kongers, I actually prefer to stay in the flatter areas closer to sea level... at least global warming significantly increases sea levels... :S

I have become intrigued with the cross-eyed bird that marks the barbecue site. Very strange looking creature although large (it looks pretty large) wood carvings often do look strange unless done by very skilled artists.

He or she (or it) has a certain poignancy--as a bird he is doubly flightless. First of all with the vistigial wings painted on his sides, like those of a penquin, kiwi, emu, etc. Secondly he is very firmly rooted in the stump of the log from which he was carved.

Silliness aside it is a lovely image and one I have shared with a number of people who also enjoy wonderfully odd things.

More re the bird: I consider it further evidence that Hong Kongers have a fondness/weakness for kawaii-ness that can rival that of the Japanese. (For more evidence, check out the Hong Kong Electric company's mascot in one of the photos in this blog entry: http://webs-of-significance.blogspot.com/2008/04/uniquefunny-signs-this-weeks-photo-hunt.html ) :D

Great shots from the reservoir. Looks like a wonderful place to explore.

Thanks and yes, it definitely is! :)