I have one of those jobs where I have to think, plan and work ahead; so that today, I was working for the most part on something that will only see the light of day on Sunday (September 14). For all this, though, there's no way that those of us who were living in the US on September 11, 2001, can't be aware that today's (a) September 11 and that seven years ago, certain attacks occurred that changed America.

Part of these changes involved a belated awareness that the world contains Muslims. Sadly, along with this awareness came an emphatic mistaken equation that Islam = destruction and ugliness. The thing is: although I'm not Muslim (and not particularly religious -- period!), I do hail from a country with a majority Muslim population.

Consequently, I'm in a position to know full well that not all Muslims are evil and, also, that there is such a thing as Islamic art along with beautiful Islamic architecture -- just one example of which I am devoting much of this photo-essay to showing: i.e., the impressive Ubudiah Mosque in Kuala Kangsar, the royal town of my countrywoman Michelle Yeoh's homestate of Perak, which I visited along with a couple of Muslim friends on my most recent trip back to Malaysia:- 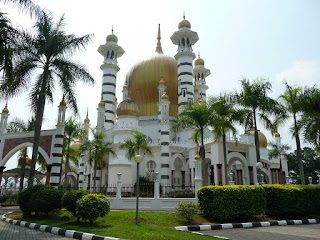 Exterior view of the royal mosque
(For those who are wondering,
Perak has a sultan as its official head of state) 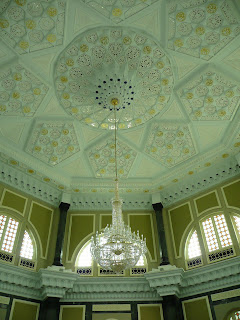 View of the ceiling
underneath the mosque's main dome 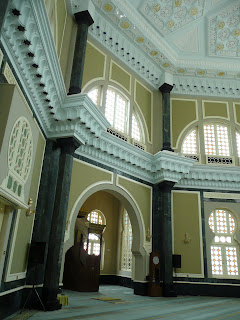 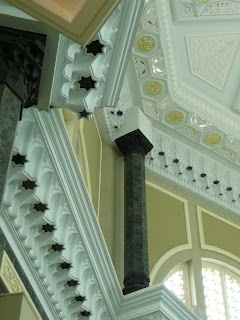 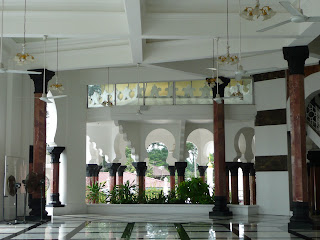 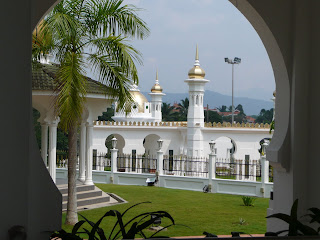 View from within that area (and yes,
non-Muslims, including females like myself, are allowed
there --albeit covered up more than may be usual) 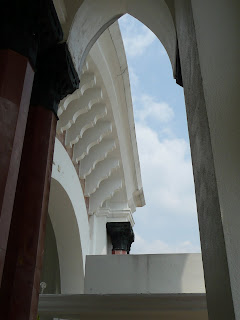 Another beautiful close -up view 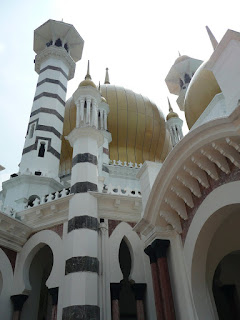 A final close-up view
-- this time of the mosque exterior

Lovely photo essay. What a beautiful Mosque. The view of the ceiling designs and the indoors with an open air area are my favorite photos. The color white under the intense sunlight looks so wonderful.

Thanks for checking out and appreciating this non-Hong Kong-related photo essay. :)

And yes, it's a beautiful mosque. Must say though that I've seen far more beautiful mosques in Istanbul and rue discovering that my camera had conked out early on during my visit there!

My daughter-in-law is Muslim so I do appreciate you sentiments. The wedding ceremony was conducted in France by a Church of England vicar helped by someone reading from the Koran, in all involving three languages. It was extremely moving. Mothers are allowed cry at their children's wedding, I hadn't expected everyone else in tears too :)

Thanks for sharing the story of your son's wedding. Sounds like it was a very beautiful affair! :)

Yes I agree most mosques are architecturally beautiful; and they are one of my favorites pic subjects too.

All those non-figurative patterns within mosques. Amazing how beautiful it all can be, right? :)