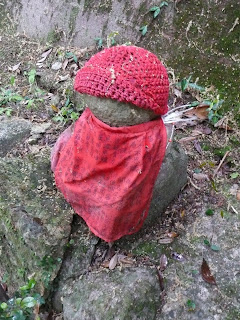 One of many photos taken
on my flying visit to Engyoji
Let me tell ya 'bout... no, not the birds and the bees, and the flowers and the trees, like the Jewel Akens song goes. Rather, I would like to devote a few lines in this blog towards extolling the wonders of the internet: which not only gave me a good friend in sbk -- who I first got to know online for a time before we finally had face-to-face encounters in Atlantic City (to attend an Anita Mui concert together), New York and Hong Kong over the years! -- but now looks to have given me an answer, via her Pictures, Thoughts and Comments blog entry here, of what it is that I had seen and taken a photo of when I visited the amazing Engyoji temple complex up on Mount Shosha.

Two words: Jizo Bodhisattva. That's what I had taken to calling a 'rock baby' and wondered whether was part of Shinto Japan's plethora of nature spirits known as kami. So, sbk (who also regularly visits and comments on this blog), is this what I think it is? If so... another mystery solved thanks to information found on the internet (and this time with the bonus of coming from a friend)! :)

thank you for you kind words, links,etc.

Engyoji looks like a beautiful temple. 30 minutes from Himiji City by bus and ropeway. What's a ropeway? Does one have to pull oneself up the side of a mountain by rope to reach the temple?

Your 'rock baby' could be a "Kami" that someone dressed up in "Jizo" clothes or just a rock formation that someone thought looked like a baby. Once I became aware of "Jizo with clothes" in Japan I started looking for him and found him in many many places. Seemed strange to me until I became accustomed to seeing him in his knitted hats and bibs.

If readers of this blog are in Hong Kong and have an opportunity to meet and go somewhere with ytsl do it! You'll have a great time!!!

You're welcome and hope I can help your worthy blog attract more visitors and comments! And in turn, thank you for your kind words about hanging out with me in Hong Kong... :)

Re the Engyoji ropeway: Think cable car (though your idea is definitely more... interesting! ;b)

What is the purpose of dressing up rocks in clothes?

I'd like to hook up with you the next time I'm out there. ;)

Re your question: From reading about Jizo, would presume that the rock is seen as a deity/housing a supernatural being of sorts.

Re the other comment: Well, get in touch and if I'm free (and especially if you're up for a hike -- am always looking for hiking companions!)... ;b