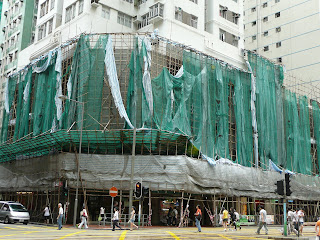 Typhoon damage last month
Another month, another typhoon. That's what it feels like this summer in Hong Kong -- what with Typhoon Signal No. 8 being hoisted at around 6pm today due to Typhoon Hagupit approaching the territory. In contrast, the summer of 2007 only saw one typhoon come a-visiting. So what gives this year, I wonder?

To judge from comments found on some websites though, it seems like last year was the anomaly rather than this year. Looking for a metaphorical silver lining in the increased typhoon cloud: I got to thinking that typhoons can stir up much anxiety but they also are known for blowing away air pollution and bringing clear air and blue sky days in their wake. So even while I'm holed up in my apartment this evening, I'm nursing the hope maybe going out and enjoying some clean(er than usual) air later in the week, especially come the weekend!

Is the tattered blue and white plastic (?) fabric a variation of the red, white and blue plastic I like so much? If so, oh my what strong winds you must have had.

I hope that you are safe and sound. Cleaner air would certainly be a good thing, too!

Yes, indeedy -- re both the cloth and also our having had strong winds!

Yes, am safe and sound -- thanks for asking. Also, yes, the skies are indeed clear now. :)

The difference might be La Nina and the Pacific Decadal Oscillation moving into a cool phase. The Earth is cooling.

What would a signal no8 typhoon look like?we only have signal no3 here and it's such a disaster already.

The earth is cooling? Could have fooled me! The way it's been so hot over here this summer, I was thinking that global warming REALLY is happening!

Actually, the damage you saw was caused by a typhoon that went up to signal no 9! A disaster from a signal 3 typhoon: Where are you??!!

Yah take the bad with the good, I guess. ;D

When does typhoon season end, I wonder?

Yup re taking the bad with the good. As for when typhoon season ends: hopefully soon!!!