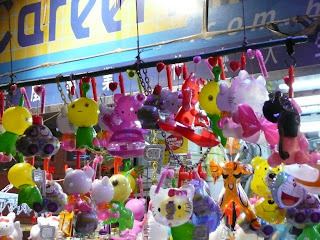 Signs of the times
Things sure ain't like what they used to be. Apart from being the second night that the Tai Hang fire dragon will make its appearance this year, tonight also is the night when lanterns will be lit, carried and paraded in commemorate the Chinese Mid-Autumn Festival. But maybe due to global warming as well as Hong Kong being China's far south, it sure doesn't feel like summer's ended yet, never mind mid-autumn! (At one point today, the temperature hit a sweltering 34 degrees Celsius in parts of the Fragrant Harbour!)

Another sign of the coming apocalypse as far as traditionalists are concerned may well be the fact that the more old-style lanterns made of colored see-through paper, constructed in such a way that a lighted candle could burn within, and or shaped like spheres and animals (or, in my childhood, also things like rockets, cars and such), have given way to plastic inflated 'lanterns'... Worse, it seems that this year, Hello Kitty and CJ7 most emphatically rule!

Despite my love of the cute cat and furry alien, I must admit to having mixed feelings about this festive development. The thing is, I did/do love the paper lanterns of my youth. They seemed more, well, Chinese as well as traditional -- one of those links to my ethnic ancestors that I felt comfortable dealing with.

Still, as I have often found since returning to Asia more than five years ago now, certain segments of people in parts of the continent -- including Malaysia and Hong Kong -- really do seem more popular/mass technology enamoured and savvy than the Americans, never mind English and Tanzanians, I also have spend years living among. This is the same continent, after all, which has made a mobile phone and digital camera owner and user out of me... though I still don't own or even know how to operate -- and still don't feel a need to do so -- blackberries, pdas, wii and whole bunch of other techie consumer items just yet! ;b

Sounds hot there. I love Hong Kong and yes I associate it with high tech gadgets too. Was it fantastic returning to Asia after being away?

It *is* hot here and I really can hardly wait for autumn and cooler weather to arrive! As to your question: I didn't really enjoy my first two years back in Asia on account of my living in Kuala Lumpur then but since moving to Hong Kong, it's generally been grand! :)

So what is the significance of the mid-autumn festival in layman's terms?

(FYI - speaking of technology, I installed Firefox and am not getting redirected to the Dell Search Page anymore when clicking on your site. I read that IE had problems with sitemeter which may explain that problem for me.)

Boiled down to its essence, I think the mid-autumn festival = moon cakes, lanterns and cooler weather, except we didn't get the last this year!