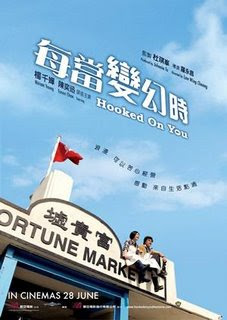 One of my favorite Hong Kong movies of 2007 --
and one of five (partly, if not completely) Hong Kong films
which also made my overall top ten 2007 movies list
Back at the beginning of this year, I wrote up a 2007 movie viewing list of sorts on this blog but unlike for 2006, I actually had not put up a Top Ten movies list of any kind for 2007. Furthermore, I've belatedly realized that -- again, unlike with last year -- I didn't offer this blog's readers a sneak peek at my "Best of..." list for the Mobius Home Video Forum.

Alternatively, something new this year that I'm able to offer up is a link to the lists of nominations for the 13th Annual LoveHKFilm.com Awards that I'm on the panel for. (For the record, this the first time that Kozo, the webmaster of LoveHKFilm.com has assembled a panel for the awards). And maybe some of you might like to use these lists when considering what Hong Kong movies you plan to check out some time.

Additionally, since the results of the Unofficial Mobius 2007 (Best Films (and DVDs)) Poll are now out, here's taking the opportunity to not only link to the poll results but also draw some more attention to the top ten movies list I assembled for it over in this blog entry:-

Call it the ET effect if you will. But what gets me convinced that this feel-good Pixar animation is so very wonderful is that I went from thinking – prior to viewing the movie – that its rat protagonist looked disgusting to deciding – post viewing the work – that it really was very lovable and utterly worth rooting for!

Nothing beats the experience of viewing a comedy with a thoroughly receptive audience. So part of me wonders whether I would have loved this hilariously screwball time-travel comedy from director Baba Yasuo as much as I did if I hadn’t viewed with the (2007 Hong Kong International Film Festival) crowd that I did; one that was guffawing away like there was no tomorrow throughout the screening. Still, it’s not like HKIFF audiences are usually that easy to please. So, I’m going to give this movie the benefit of the doubt and believe that it really is super funny and enjoyable in its own right!

This visually sumptuous historical epic was released in cinemas at the tail end of 2006 in Malaysia (and Hong Kong) but it continued its theatrical run in these territories through to at least January 2007. Although this hyper-dramatic work certainly can make for a study in excess, what I particularly liked about it is that director Zhang Yimou managed to ensure that its grand scale didn’t detract all that much from the domestic melodrama that was chillingly laid bare over the course of the film.

Well-written, beautifully shot, well-acted (by an all-round strong cast) and thoughtfully presented procedural turned thriller with a couple of genuinely hair-raising moments. Maybe the strongest praise I can give this David Fincher-helmed work is that I found it so involving that time flew by when I watched it, and so much so that it came as a bit of a shock to realize that the film’s actually as long (158 minutes) as it is!

This visually inventive and touching film adaptation by Marjane Satrapi (and Vincent Paronnaud) of her autobiographical graphic novels lays bare an eventful life led in Iran and Europe. The animated work’s images may be largely black and white but no way does this mean that it lacks for wondrous imagination and expressive beauty.

A prostitute drama that strikes a serious tone and is all the more moving for doing so, this low budget offering from the 2007 Hong Kong International Film Festival’s surprise Director in Focus, Herman Yau, got me all nostalgic for a time when Hong Kong cinema churned out actor-centric, human-scale and female-focused works such as it like there was no tomorrow.

A highly original and thought-provoking (even if hard to understand) work from Jiang Wen that comes complete with a superb score and equally top class visuals, particularly in its pulsating final segment that melds together mesmerizing music with the kind of aesthetically edifying imagery that stands as a rebuke to anyone who doesn’t realize that moving pictures can be as beautiful and artsy as hand-drawn or -painted masterpieces.

As is to be expected of a film that was released in Hong Kong cinemas three days before the 10th anniversary of Hong Kong being handed back by the British to China, this ostensible romantic dramedy which stars a couple of singer-thespians (in Miriam Yeung and Eason Chan) contains a look back at the past 10 years of Hong Kong’s history. What’s less expected though is that the only movie that I deigned to see twice in cinemas in 2007 possesses an ending which is especially satisfying because it contains concluding messages on the subject of love, life and friendship that are rather deep and realistic, and all the more unconventional for being so.

This charming and emotionally satisfying coming-of-age tale sees director Yasmin Ahmad staying true to the culturally-sensitive cause and path that she charted with works like SEPET (2004) and GUBRA (2006) but also providing evidence of an increase in cinematic sophistication by way of being less heavy-handed in her moralizing approach this time around.

An amazingly atmospheric piece of film-making which sucked me into its world and millieu, leaving me temporarily disoriented when I got out of the cinema. If only this Ang Lee adaptation of an Eileen Chang short story’s climactic scene/denouement didn’t have its main female (a bravura performance by newcomer Tang Wei) appearing to act so disappointingly out of character…

And should you wonder: yes, of course, I do welcome comments about my choice of top ten films! At the same time, here's recognizing in advance of any challenges that my opinion isn't particularly authoritative as well as including the caveat that the comments with which I had prefaced my Mobius list really do ring all the more true with the passing of time: i.e., that:-

I’m probably going to change my mind more than once again about what constitute my top 10 choices of best theatrical film of 2007 but, hell, I figure I might as well go ahead and submit the list I finally assembled this week – and AM (1:58, as I write this, to be exact!) to you.

(And this especially since, the more I think of it, the more highly my estimation of HOOKED ON YOU has gone up -- and so much so that if I were to write that list right now, it'd be my top Hong Kong movie of 2007!)

Good list. I would definately have left off Golden Flower from my own list as it marked the moment I became officially bored with Zhang Yimou and Gong Li -- long way from the heights of Red Sorghum and Raise the Red Lantern.

I was a tiny bit disappointed with Hooked on You but I did enjoy it (despite probably missing some HK-centric jokes). Certainly better than the admirable-but-boring 2 Become 1 and the average Drink Drank Drunk but that's just IMHO.

I will read your list with more attention later.

Do you know how hard it is to find the NC-17 rated version of Lust, Caution on DVD over here? Every shop I've looked in will only stock the R-rated version ('the version you didn't see in theaters' LOL, as it's tagged).

We are a nation of hypocrites sometimes and NC-17 still carries a stigma.

I am anxious to see the film still.

I only saw two movies on your list. I have to admit I don't go to the theaters to watch movies anymore. I subscribe to netflix and buy the occasional dvd.

Ratatouille - I like the movie but the scenes with rats all over the place kind of creeps me out at first.

Hooked on you - good movie but I didn't really like the ending. I only saw it on a small screen.


The rest I'm going have to check out.

ack ack ytsl, surprise re bubble and curse. bubble is fun to watch but top 10 in your list? hmmm... and curse... visually sumptuous but that is about it. but as i always say, to each their own... also in this respect, re ur 7.5/10 for kungfu dunk but i can't really see anything there and would be hard pressed to give it anything more than a 5.... ;-)))

As the proverbial 'they' say: One person's meat is another's poison. Alternatively put, I didn't care much for the Zhang Yimou and Gong Li of "Raise the Red Lantern" but really was surprised how much I got out of my viewing of "Curse of the Golden Flower".

Re "Hooked On You": Like I wrote on Mobius, it's the only 2007 Hong Kong movie I deigned to watch more than once and I think it got better the second time around.

Re "Lust, Caution": No, I didn't realize it was that dificult to find a NC-17 rated version of the film in the US. I only know how difficult it is to find a DVD of it with English subs over here in Asia... :S

Since moving to Hong Kong, I actually do the bulk of my movie viewing on a big screen.

Re "Ratatouille": Know what you mean re that scene.

Re "Hooked On You": Funny, but it's the ending that made the movie extra special to me! ;b

Hmmm, one more person who didn't like "Curse of the Golden Flower"! (See Glenn's comments above) What can I say other than that maybe it really did help that I went into the movie with low expectations. As it turns out, I even really like Jay Chou's theme song! :b

As for "Bubble Fiction": Like I said, the crowd reaction probably had a lot to do with it. But, really, it was amazingly great fun to watch with the receptive audience that I watched it with.

Now I'm curious about Hooked on You. I admit that I wrote it off because of the two leads. heheh. I need to read lovehfilm's review though even before I consider purchasing it.

FWIW, both Eason Chan and Miriam Yeung have grown on me; the latter especially after I met her but also when I watched her in her first Milkyway Image movie ("2 Become 1") -- also directed by the same fellow who helmed "Hooked On You".

As for needing to read lovehkfilm's review: What, my opinion doesn't count? :(

Your opinion, as well as lovehkfilm's opinion, both count, dear.