The cinematic gem that is Mukhsin 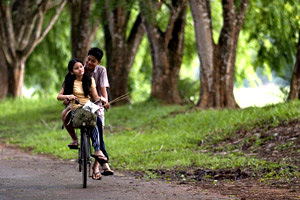 He is beautiful, doe-eyed, and has muscles.

He can climb his way to the top of a telephone pole in five seconds flat.

His real name is Syafie, but from now on, he shall be known as Mukhsin.

Later that month, she proceeded to share that with her fourth feature film, I try to examine one common and uncomfortable human experience:

What happens when your very best friend - someone with whom you've been learning to do cool best-friend things like climbing trees, flying kites, riding bicycles and even getting into fights with other kids - starts to develop romantic notions about you?

In the case of 12-year-old Mukhsin (the character) and the 10-year-old girl named Orked who develops a case of puppy love for, all -- and much more besides -- does get revealed in Mukhsin (the movie). And in the tenderest and touchingly bitter-sweet of ways which are sure to melt the heart.

Ways which, to boot, left this filmophile almost speechless with delight -- to the extent that I only feel able to truly -- and hopefully articulately! -- express my views of this moving offering after more than twenty-four hours have passed since I viewed Mukhsin at my local movie theater. That is, only after I've had some time to reflect and think about this heartwarming cinematic gem; and to such a degree that my dreams last night were of that which I've decided is the talented Yasmin's best effort to date.

To backtrack a little: Back in 2004, when I was working as a television executive, I was handed a VHS screener of Yasmin Ahmad's second feature film to view and evaluate. In this way, I was one of the few fortunate Malaysians who got to watch the uncensored version of Sepet (trans., "slit eyes"); her daring piece of inter-ethnic romance which was initially banned by Malaysia's national censorship board, then only released in Malaysian cinemas after a total of nine frankly ridiculous cuts had been made to the work.

To cut a potentially long story short: I found Sepet to be an admirable attempt at a muhibbah spirited movie; one to be lauded for its sincere cultural political intentions and social messages but also polished execution. Consequently, it was with no small amount of happiness that I followed its international film festival progress and garnering of such as the Best Asian Film award at the 2005 Tokyo International Film Festival as well as Best Film, Original Screenplay, Poster and Supporting Actor along with Most Promising Actor (for Ng Choo Seong) and Actress (for Sharifah Amani) at the 2005 Malaysian Film Festival.

Then, last year, there came Gubra (trans., "anxiety"), the sequel to Sepet which Yasmin described on her blog as being "about love (because, as John Cassavetes once said, "nothing else interests me"),...betrayal, and in the end, the difficult but inevitable question of whether or not to forgive the people who betray us." And, all in all, a work which I found to be structurally looser plus more complex than -- but with the same admirable heart and soul of -- the earlier movie.

Thus it was that I went into my viewing of Mukhsin with high hopes and expectations. And came out of the theater with a lump in my throat, tears in my eyes, and feelings of happiness, even pride, that a fellow Malaysian truly boleh: that is, really was so capable plus able to capture the spirit of Malaysia on film that two of my other Malaysian multiculturalist heroes heroes, Adibah Amin and Mohamed Nor Khalid (AKA Lat), have been able to commit to paper for decades now.

There's a good chance that many of you will get an opportunity to check out Mukhsin for yourselves. (The Bahasa Malaysia, English, Mandarin and Cantonese language offering had its world premiere as well as captured two awards at this year's Berlin Film Festival. In addition, it will have two screenings at the upcoming Hong Kong International Film Festival.) So I don't want to divulge too many details about this deceptively simple work in this write-up of it.

Additionally, and even as early as Sepet (or her first feature, Rabun, which I've yet to have the opportunity to view), Yasmin's choice of music to infuse her cinematic works truly stand out. And here's putting it on record that I absolutely adore the lovely keroncong piece entitled Hujan (trans., "Rain") which features in Mukhsin that is beautifully sung by Adibah Noor and was actually composed by Yasmin's father; and so much so that I'd buy a CD that has that song on it.

Lastly for today, here's further mentioning that Mukhsin also benefits from having a terrific cast whose special qualities become all the more apparent when you realize that it's headed by a 14-year-old boy (the film debut-making Mohd. Shafie Naswip) and 12-year-old lass (the apparently comfortably tri-lingual Sharifah Aryana); and, as well, that onto the young girl's shoulders had been placed the not insignificant responsibility of bringing to life a younger version of an adored character who previously had been magnificently and memorably essayed in not one but two movies by her older sister, Sharifah Amani.

Thank you so much for you comment! My day did get better luckily after the crappy morning that I had. I am definitely going to check out that book you recommended, it looks great.

You're welcome and I'm glad that your day got better, etc.

And for curious others: Katie's referring to a comment I posted over on her blog recommending that she check out Elenore Smith Bowen's "Return to Laughter". ;)

I am a huge fan of Sepet and have Gubra coming in the mail. There is a Singapore on line seller that stocks those with English subs though sadly they told me that Sepet was out of print for now. Is Orked the same character as in Sepet and Gubra as a child? Also for fans of Yasmin, she has a great cameo in the Malaysian film S'kali as herself.

Hope that more prints will be made of SEPET. The feeling I get is that there still are a lot of people out there who have yet to hear of it but probably would like the movie a lot if they were to view it.

"Is Orked the same character as in Sepet and Gubra as a child?"

My "yes" answer is a qualified one as -- and here I'm trying very hard not to be spoilerish -- there's a sequence in MUKHSIN (which could be interpreted as a fantasy sequence) that casts doubts in one's mind re it. But, for the most part...

"Also for fans of Yasmin, she has a great cameo in the Malaysian film S'kali as herself."

Yasmin additionally appears on screen in Ho Yuhang's RAIN DOGS -- for which Ho Yuhang looks to have reciprocated by making a cameo appearance in MUKHSIN. :)

I loved Sepet (and very happy to be able to find the dvd at Changhi airport days after talking about it with the owner of this blog!)
and so eager to watch Gubra -

and I hope Mukhsin will find its way into our city by the way of a festival - but I highly doubt it since this year there are even less Asian films than it used to at our Istanbul IFF programme :(

When will the Istanbul IFF program be announced? If it hasn't yet, I hope you'll be pleasantly surprised when it is. :)

I'm looking forward to Muhksin. I enjoyed both Sepet and Gubra, despite having to suspend disbelief. I also dont particularly like it when the characters start channeling Yasmin Ahmad. I like to romance and feel-good factor of both films tho. What are yr fave movies of all time?

"I also dont particularly like it when the characters start channeling Yasmin Ahmad."

I'm not sure whether you'll think this when you check out MUKHSIN but I do think that it doesn't have as much "characters channeling Yasmin Ahmad" moments as SEPET and GUBRA. ;)

As for my favorite movies of all time: Yikes, have to mull this question before getting back to you re this! OTOH, you can go check my author profile for my top 5...and I know that number 6 would be CHARIOTS OF FIRE... :)