Goodness! Just checked and got to discovering that this will be my 250th post on this blog that I began back on 16 November, 2006, on a somewhat pensive note and without much realization that it would end up being as photo filled as it has become! Rather than mark this blogging milestone -- and, as it so happens, the 15th day of Chinese New Year -- with any deep musings or ruminations though, I'm going to go ahead and put up what I set out to do this evening: i.e., another Hong Kong photo-essay; the first of at least two that I plan to devote to Tap Mun (AKA Grass Island).

Back in December of last year, a friend and I spent a few hours out in the northeast of Hong Kong on one of those sparsely populated and remote areas of the territory that many people don't realize exist, never mind have deigned to visit. Our original idea was to go hiking in the unpopulated section of the interesting as well as scenic island. As it turned out, however, we ended up not only starting and ending our explorations of Tap Mun at its twin villages in which the bulk of the island's 100 or so human inhabitants reside but also wandering around them. Hence the bulk of the photos in this photo-essay containing plenty of objects that bear the mark of humans rather than (just) mother nature... 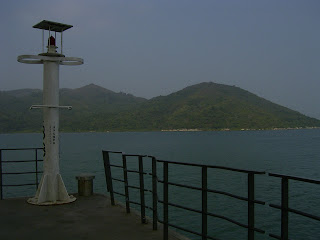 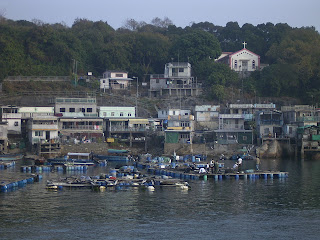 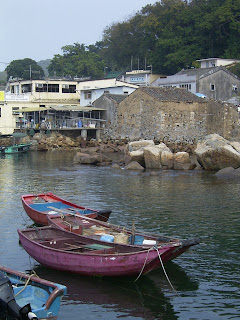 Yes, Virginia, this really is Hong Kong! ;b 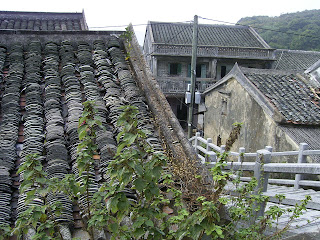 ...and again -- and, yes, in all honesty, this image
conforms much more to what I had imagined I'd find
in remote areas of Mainland China rather than the HKSAR! 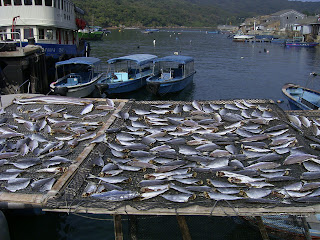 Something that one gets to realizing about Tap Mun:
the islanders sure are into drying their fish! 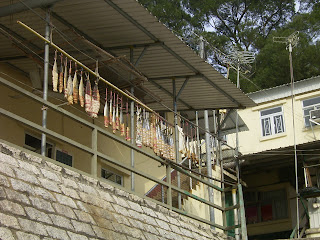 Another discovery on our visit to Tap Mun:
that some folks there literally hang fish out to dry! 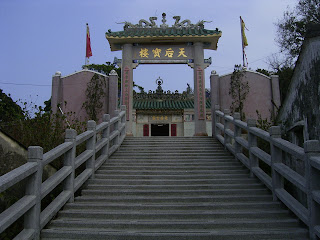 The stairway up to, and gateway in front of,
the pride of Tap Mun's older village --
its surprisingly large (but also seemingly
not much frequented these days) Tin Hau Temple 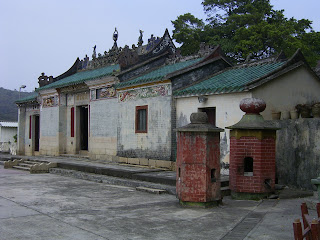 The late 17th-early 18th century Tin Hau Temple
that remains one of the island's
most impressive architectural landmarks
Posted by YTSL at 10:03 PM

Fun photos. My favorite is the hanging wrapped up and tied up fish. I imagine they're wrapped so they don't fall apart while drying. Are they hung too precariously for the birds to nibble on?

Your guess is as good as mine re why those fish are wrapped up! OTOH, can attest to not having seen any birds nibbling on them. Maybe the birds know from experience that they're too salty for their taste? ;b

I'm too early for photo hunt but I am happy to see these photos. That's what I say. When did my blog become a photo blog? I'll be back again.

Am glad you checked out these photos too. And my photo hunt entry for this week is now up. So hope you'll visit again soon! :)

I always enjoy your photos.