A hike up Tai Mo Shan on a beautiful, blue sky day (Photo-essay)

Standing at 957 meters (i.e., 3,470 feet) above sea level, Tai Mo Shan (AKA Big Hat -- think fog -- Mountain) is Hong Kong's highest peak.  But although it may seem logical to think it so, it's not the most difficult Hong Kong mountain or hill to ascend.

This is largely because one can hike up all the way-- or at least as far as you go before you reach the restricted area occupied by a Hong Kong Observatory weather radar station -- via a paved road leading up to the top of what actually is an extinct volcano that doesn't have all that steep a gradient.

In part because of this, and because it can be quite a bit cooler up on Tai Mo Shan than in those areas closer to sea level, a trek up Hong Kong's highest mountain is one that may be nicer to go on in the hotter than cooler months.  Thus it was that two friends and I decided to go up Tai Mo Shan one hot summer afternoon -- and there was the bonus of the afternoon in question also being one which was a sunny and high visibility occasion! :b 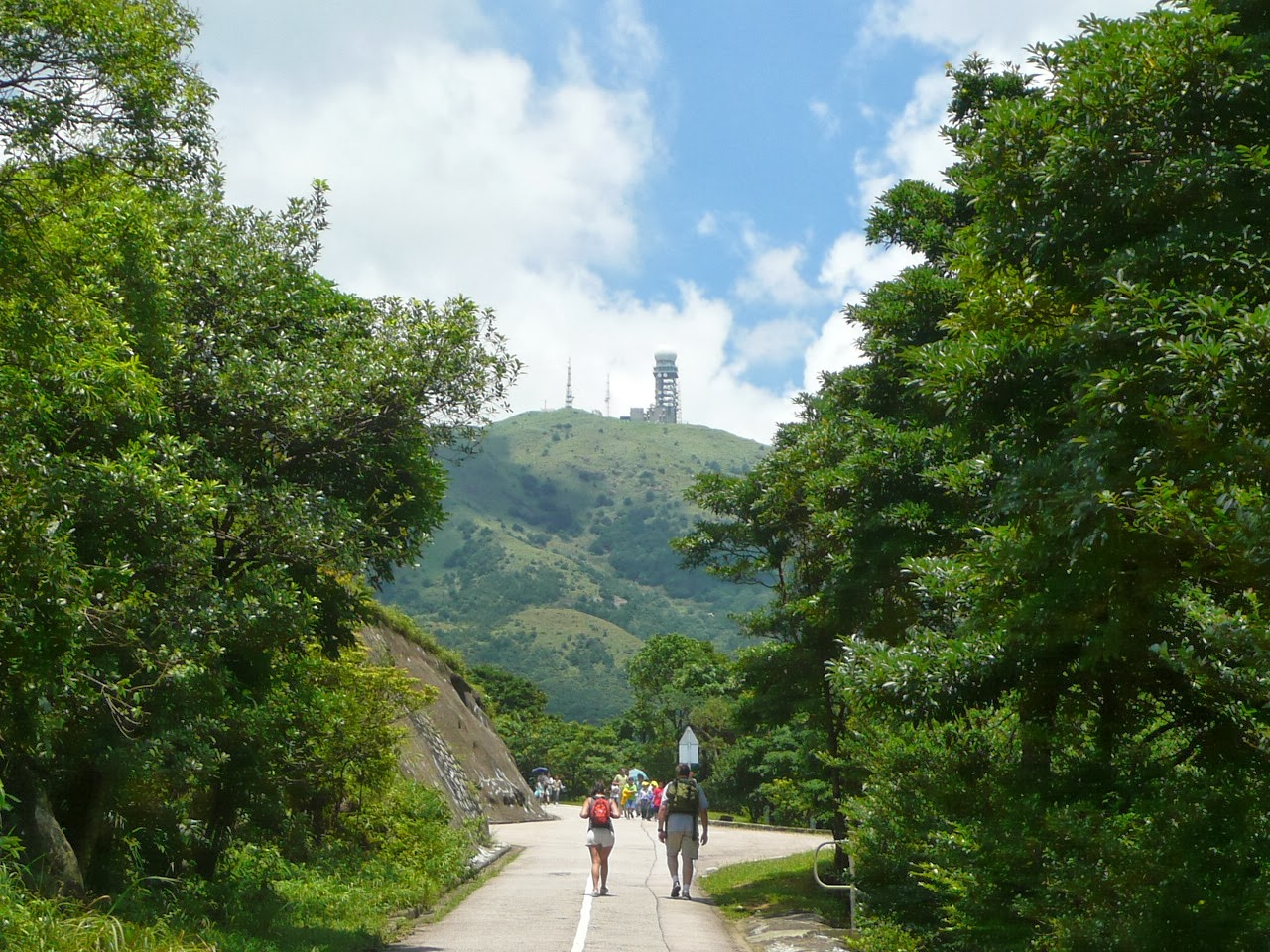 Our destination looks so close yet is actually fairly far away! 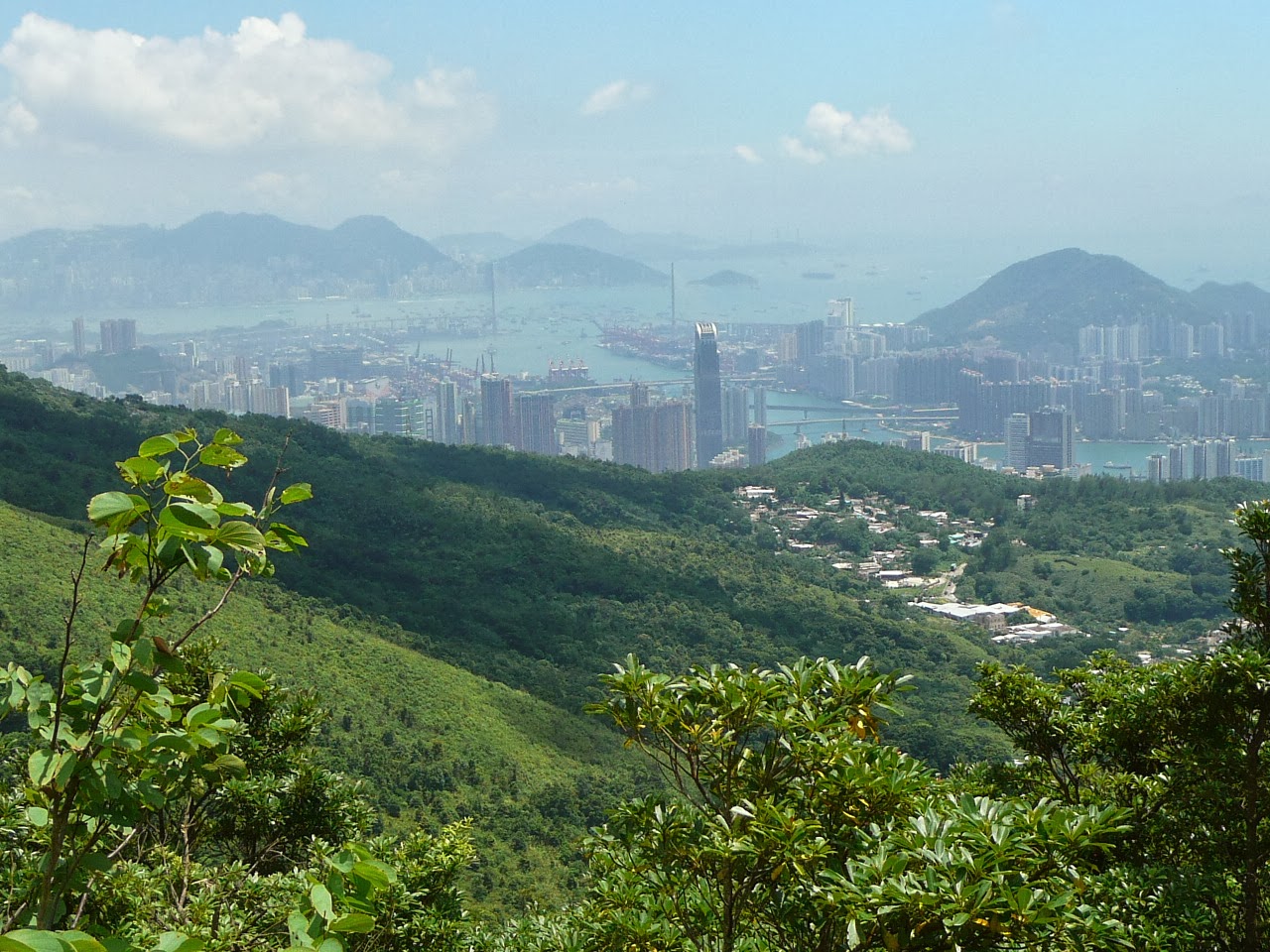 Early into our hike, we got to realizing that we had lucked
out in terms of it being a high visibility day! :) 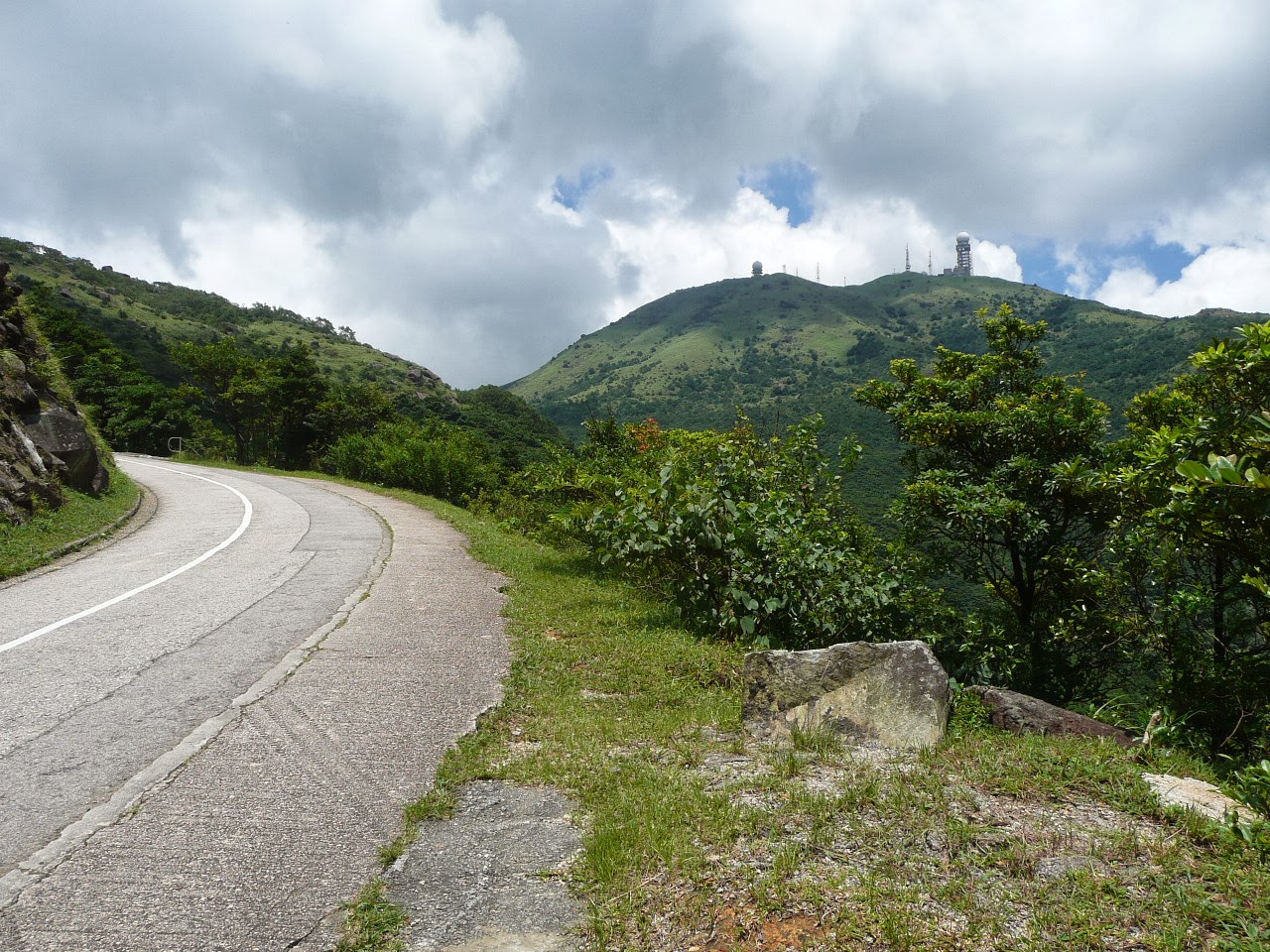 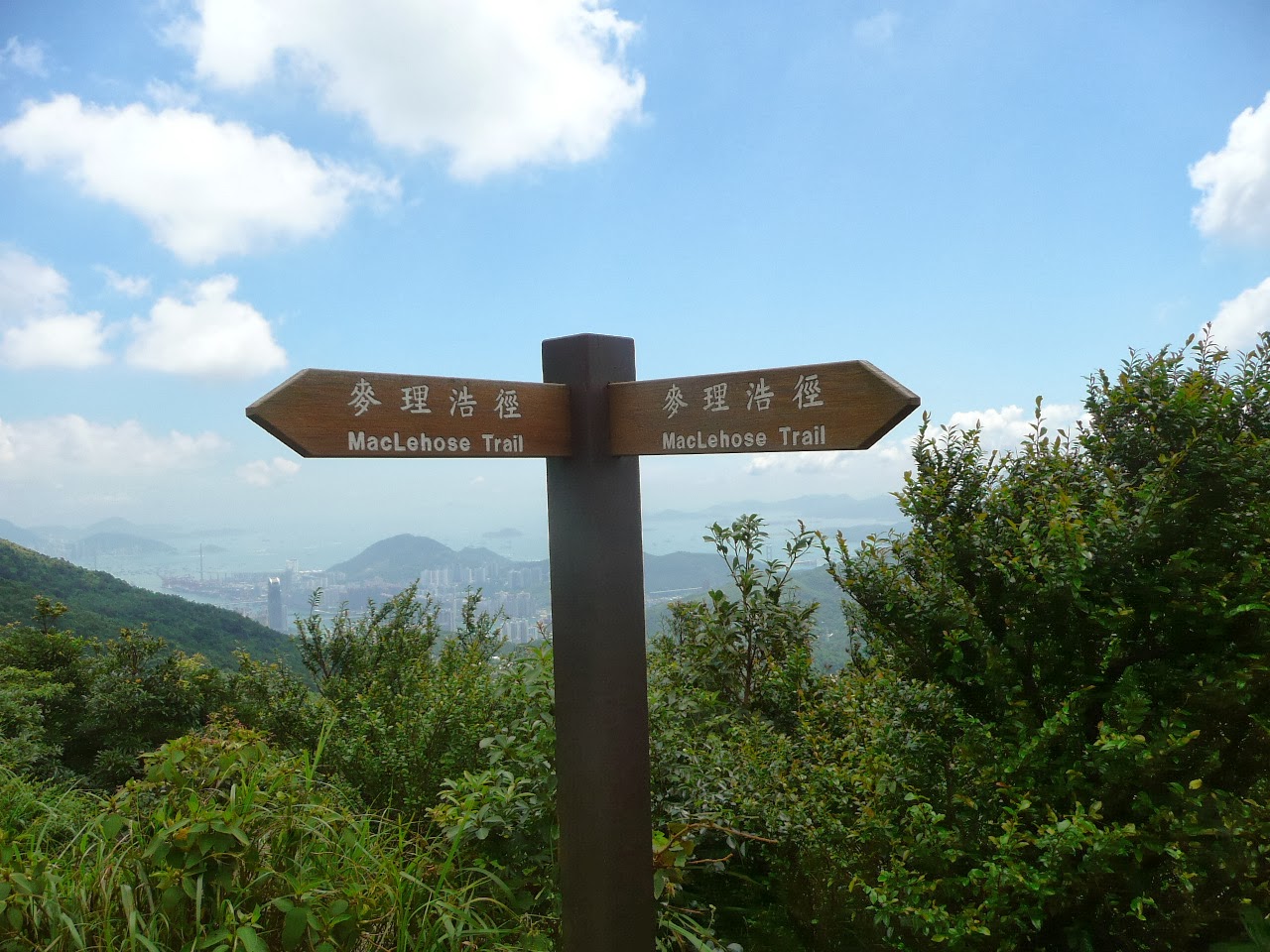 Whichever way we go, it'd be on the Maclehose Trail! :b 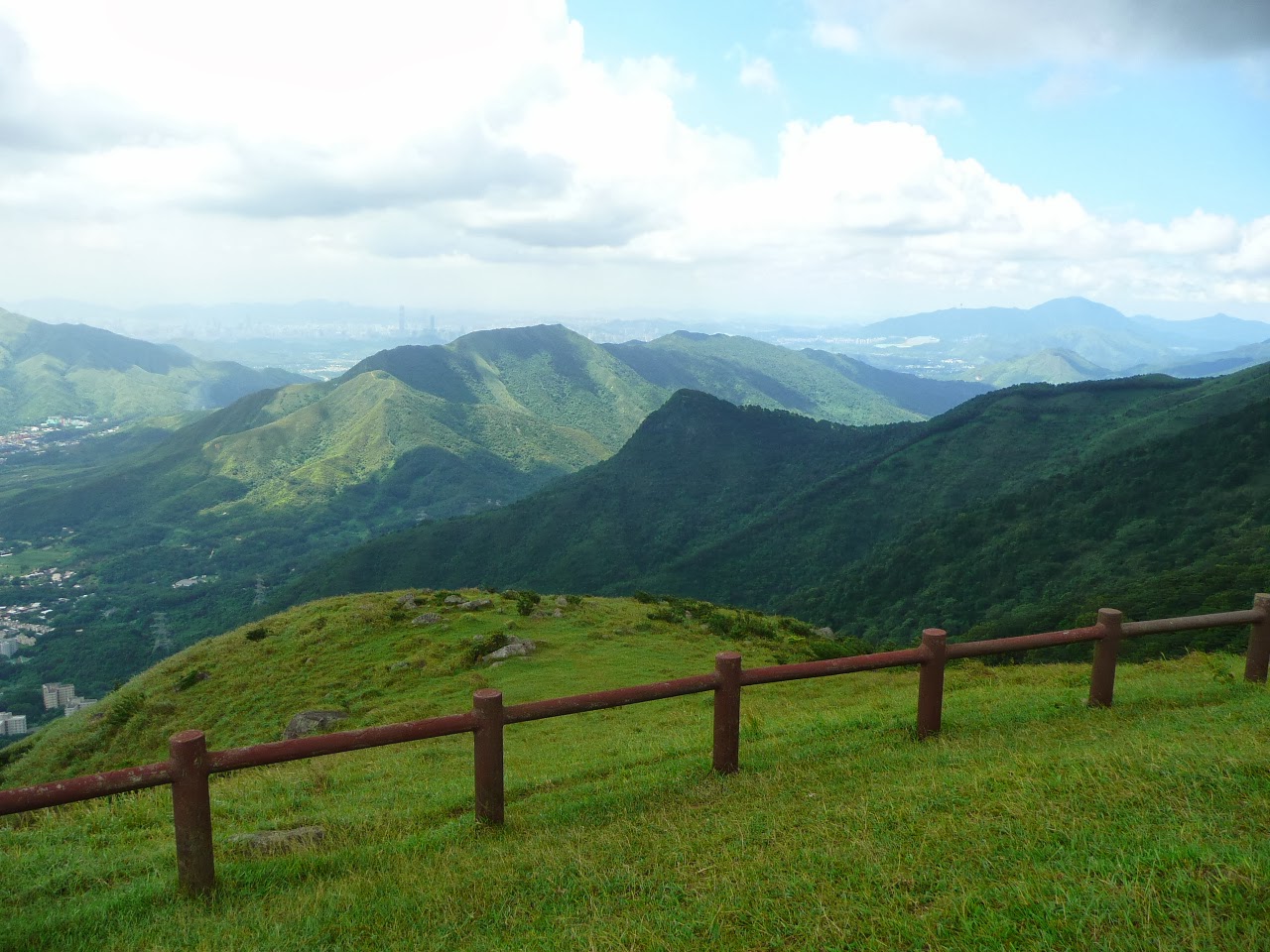 How green is my (Hong Kong) valley? ;b 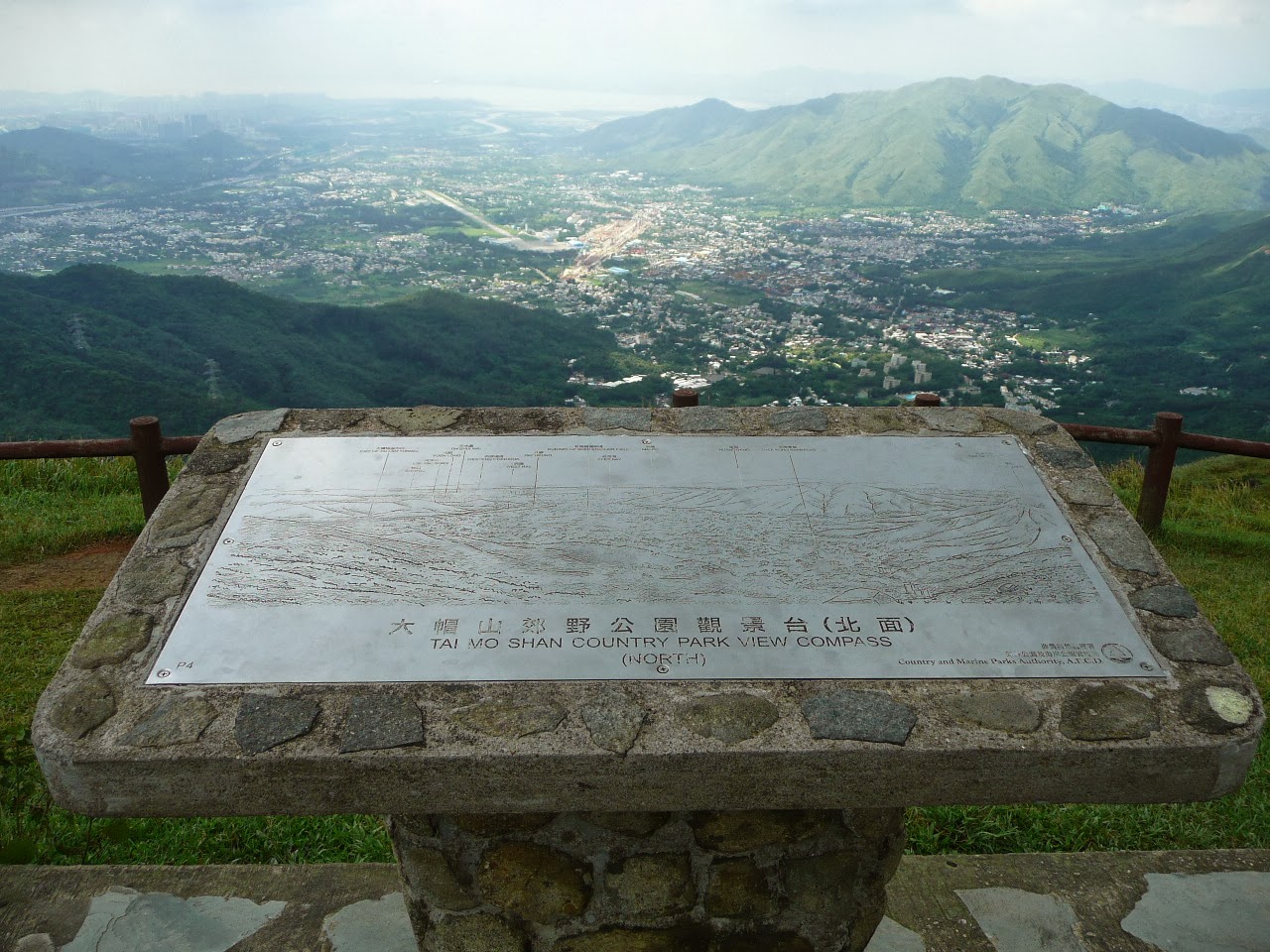 Looking northwards to Pat Heung, the mountain range
of Lam Tsuen Country Park, and beyond Feral cows can be found on Tai Mo Shan as well as
Lantau and the Sai Kung Peninsula! 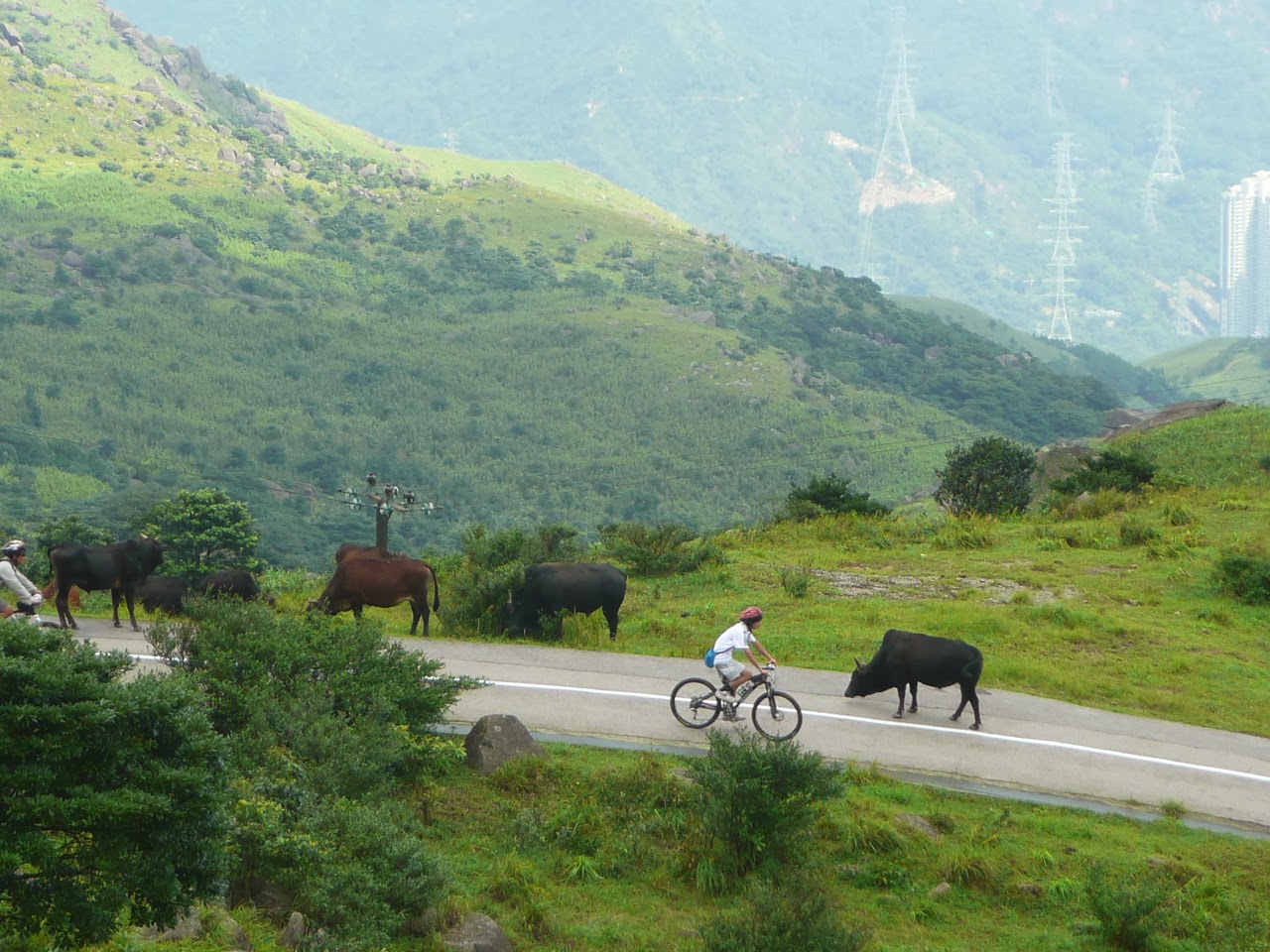 All that bicyclist had to worry about was cows
-- not cars -- being in his way... ;b

I went up there a few times last year. But I started from Discovery Park Bus Terminus, on foot, through Yuen Chuen Ancient Trial, Shek Lung Kung, Ha Fa Shan to Route TWSK at the pass, then went along the Maclehose Trail towards Lead Mine Pass, then down to Taipo. It would usually be an all day hike for me.

If you want a way up little bit more difficult, try going up through the old route through Chuen Lung Village next time. The old route goes up in Zig-Zags to Heung Shek Cemetery, then to the YHA Hostel before reaching car park. This alternative route is also visible on current version of country maps, or Google.

There is also different forked paths to Miu Go Toi (妙高台) where a Fire Lookout is located. You should be able to see this lookout from Tai Mo Shan Road too.

Oh my, the hike you described sounds lengthy and arduous! I've been on the Yuen Tsuen Ancient Trail, and Shek Lung Kung and Lin Fa Shan to Rout TWISK -- but on different hikes rather than just one altgoether!

Thanks for the recommendation for the trail up Tai Mo Shan from Chuen Lung. I've seen signposts for it while hiking the Lung Mun Country Trail that goes from Chuen Lung to Shing Mun Resrvoir.

It's not that much as at my age I am not going for speed anymore. My last attempt from Tsuen Wan to Tai Po, I started a bit after 0900 hrs and reached Tai Po Railway Station at around 1900 hrs.

I used to be able to hike from Silvermine Bay to Tai O via Nam Shan Ancial Trail and then go along Lantau Trail (Sunset Peak, Lantau Peak, etc).

Past record of around three decades ago we started at around 0730 at Silvermine Bay after Dim Sum Breakfast and then reached Tai O's Tung Fong Siu Kei Yuen Vege Restaurant for late lunch at around 1630 hrs.

I don't think I could hike that quick with so many ups and downs these days.

Your past exploits sound amazing and your contemporary ones not too shabby either. I, too, am not at an optimal age. The lengthiest hike I've been on time wise has been around 7 hours but I usually prefer ones that are around the 4 hour mark.

As usual, you extract some interesting photos from your archive and add words to create a good photo-essay of this ascent. I took one of my rare organized tours to this area on my very first visit to HK many moons ago. However, the shades of green of the valley in the pastoral fifth photo from the top are enough to spur me to take this hike on a future visit.

Wow re your having been taken on a tour to this part of Hong Kong on your first visit to the Fragrant Harbour! It's one many people don't realize exist, despite visiting many times or even living here for a few years!

Hi YTSL, what a wonderful looking and sounding hike. The views are very beautiful and I just love that last photo!

It was a good one for a super hot summer day. Come back in a few days to see the concluding photo-essay for this hike! :)