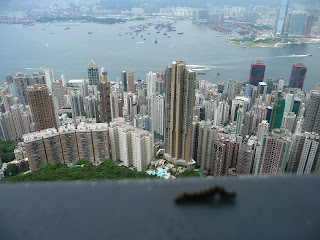 A scenic view from the (Victoria) Peak Circuit's
northern Lugard Road section  -- but wait, what's that
blurry thing in the foreground of the photo that
I was (also) trying to bring into focus? 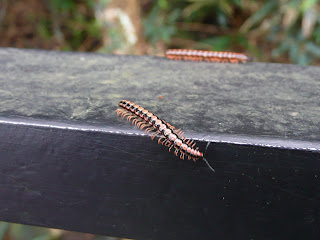 A caterpillar like the pair in this photo, that's what! :) 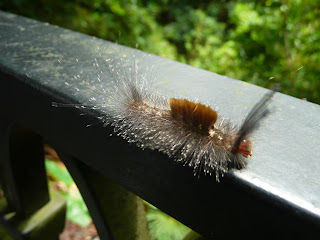 Earlier today, I went on a hike with a friend that didn't yield too many good photos -- this not least because of the misty gray conditions that we experienced for much of the afternoon, and especially when we were up near the top of Victoria Peak and at the very top of neighboring High West.  In all honesty, I didn't mind too much though because the hiking route I chose for today consisted of trails that I had previously been on on days with better weather and visibility.  Put another way: the main intention of today's hike was to get in a good workout more so than to come across (and take photos of) scenic vistas.


Before the mist moved into the area though, we did get some nice views -- as might be expected when one's walking about the Victoria Peak area.  However, it's also true enough that what frequently caught my eye more was the sight of scurrying caterpillars -- all of which appeared to be hurrying to the same meeting or location as they all were headed in the same easterly direction!


So quickly were the caterpillars moving that it really was pretty difficult to get good photos of them.  And I'm not sure whether other people were too preoccupied with taking in the panoramic views along the Peak Trail (which is where we spotted all those caterpillars -- for, in contrast, none were to be seen on High West, on the Governor's Walk or the trail leading from The Peak down to Pok Fu Lam) but I only saw one other person attempt to take a photo of a caterpillar this afternoon!


While I do wish my caterpillar photos from today's hike were better, I still reckon that they are worth sharing.  So here they are -- and if nothing else, I like that they help to confirm once again that there are many interesting critters to be found on Victoria Peak (on cool and damp as well as more conventionally hot summer days) despite it sometimes seeming like they must have been driven away from the area by the large and often way loud tourist hordes about!
Posted by YTSL at 10:14 PM

Tee hee, actually, there's just one (especially) fuzzy caterpillar in this entry... but you can check out pic of others here:-

It turned out U had nice pictures!

Well, I wish my caterpillar pics were a little less blurry than they are -- but thanks for appreciating them all the same. :)

The fuzzy caterpillar is a kind of tussock moth larva.

Thanks much for the ID!