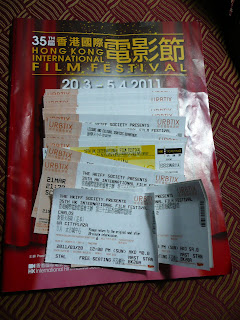 A HKIFF program guide/booking booklet and
the many tickets I've got for this year's HKIFF :)
The 35th Hong Kong International Film Festival got underway today -- with the very first screening of the day being the complete 325 minute version of Olivier Assayas' made-for-TV mini series which topped Film Comments' critics' top 2010 films list. And that screening also started off my own personal 2011 HKIFF-ing which is scheduled to take in 21 works by the time the film fest draws to a close at the end of April 5th!

As has become the norm, first on the Mobius Home Video Forum, then over on Hong Kong Cinema: View from the Brooklyn Bridge and over on this blog since 2007, I'll offer up reviews of films I view at the HKIFF -- which this year is scheduled to include a number from Hong Kong (of course!) and Japan (ditto!) but also from territories further afield, including Singapore, Brazil and Congo as well as the usual European suspects. And although in this entry there'll just be my thoughts on one work (even though I've already seen two HKIFF offerings today), the other entries will have me sharing my thoughts about at least two movies and usually more than that! :)

In this part of the world, Olivier Assayas is probably best known to many people as Maggie Cheung Man-yuk's ex-husband; this despite his having directed and scripted over 20 films, including two (Irma Vep (1996) and Clean (2004)) starring his ex-wife. And it's not just pure Asia-centrism that has made it so that those two films and HHH: A Portrait of Hou Hsiao Hsien (2002), his documentary of Taiwanese auteur Hou Hsiao Hsien, were the only works I had seen by the former Cahiers du Cinema writer prior to Carlos.

Rather, it's due to it being so that quite a few of Assayas' other works, have not attracted the most positive of reactions -- notably, Demonlover (2002) which was notoriously heckled at when it screened at the Cannes Film Festival. In contrast, however, Carlos has won him the kind of plaudits that would have made it a dead cert to win such as the Best Foreign Language Film Oscar, if not outright Best Film, if not for the fact that it actually was made for TV.

A transnational tour de force of a work (whose production values are much more in tune with that of big budget feature film than your everyday TV show), this richly detailed fictionalized account of the life and times of the real life international revolutionary/terrorist Illich Ramirez Sanchez (AKA Carlos the Jackal) can, at its best, seem alternately like an amazingly well-researched documentary and an enthralling psychological study of a man whose ultimate cause is himself and the feeding of his ego. And this particularly in the build-up to and during the real life event during which the man who decided to give himself the code name of Carlos (supposedly after a Venezuelan President he admired) held the OPEC oil ministers hostage and had them and others at his mercy.

The work starts with Illich/Carlos living in England and working as a Spanish teacher but already having spent some time among Palestinian revolutionaries as well as studying economics at a university in Moscow. By the time it ends, we've seen him and others living and working in a range of territories stretching from Europe to the Middle East and into a part of Africa beyond that which borders the Mediterranean Sea Along the way, we hear Carlos and others speaking English, French, German, Arabic, Japanese, Russian and more. And while it's unusual enough for a single human being -- fictional or real -- to be so trans-national and multi-lingual, it is truly revelatory as well as thoroughly admirable to see a single TV or cinematic work being so.

Even if one were to take away the fact that he had to perform in far more languages than is the norm for an actor, Edgar Ramirez's performance would be one that's impressive in its range -- since he convincingly plays Carlos from the 1970s through to the 1990s, and as a fine physical specimen of a young man to a middle-aged fellow bloated by too much alcohol and other excesses, and various stages in between. (Even more breath-takingly, the camera is allowed to lay bare both extremes of physique -- rather than mask them!)

While Ramirez definitely owns the screen whenever he's on it, Carlos also undoubtedly benefits from having a generally strong cast to share screen-time with. Interestingly, despite the nationality of its director, the standouts among this France-Germany co-production's supporting cast are not French but, rather, German (notably Christoph Bach, Alexander Scheer, Nora von Waldstatten and Julia Hummer) and Lebanese (Talal El-Jordi, Ahmad Kaabour and Rodney El Haddad).

At the same time though, it's the main man behind the camera that I came away with the most respect for. Because what he has produced is a work that few other filmmakers could make: both in terms of the comfort and confidence that is shown in (re-)creating scenes taking place in such a large number of culturally as well as geographically diverse lands and over a couple of decades -- and in cobbling them together to make for a very coherent, enthralling whole that comes across as intelligent, probing and questioning as well as intriguing, thought-provoking and entertaining.

Carlos sounds fascinating, look forward to having the chance to see it, as well as reading all your festival posts.

Even though I never really felt emotionally involved, I was nonetheless surprised at how consistently engaged I was for the entire 5 1/2 hours of Carlos.

I'll be keeping my peepers on your blog for HKIFF updates. As always, I'm jealous! Maybe I'll make it next year!

WOW! 9.5!? I've been meaning to check this out. Thanks YTSL. Looking forward to your other reviews.

So jealous that you get to go to the fest and see so many films! Have fun and enjoy! =)

Saw the film couple of months ago and have been thinking about it ever since. I really like your final paragraph as a summary: [it] make[s] for a very coherent, enthralling whole that comes across as intelligent, probing and questioning as well as intriguing, thought-provoking and entertaining.

If you get the chance, you might want to look at Assayas's 2008 film L'Heure d'été (Summer Hours), it's also beautifully paced and photographed, with a stellar cast, and an intelligent script.

Other than that, I look forward to reading more of your HKIFF 2011 posts!

Very happy to hear that you are going to put HKIFF related posts! Looking forward to them.

I was not very fond of Clean (despite a good performance from Maggie) so never thought to seek other Assayas films out.

As I understand it, "Carlos" is out on DVD -- am not sure if it's the full version though... but would suspect that such is available or would be available soon.

Yeah, the 5 1/2 hours weren't a drag at all -- even though the last couple of hours were not as dynamic as the first three or so... as befits the story.

And hope to see you at the HKIFF some day in the future. :)

Did you see "Carlos" at the European Union fest? If so, am thinking that's not the complete version.

And thanks for the recommendation re "Summer Hours". Right now, have to be honest and say that I know more Olivier Assayas titles that I should stay away from -- with another being "Boarding Gate"! :)

Glad to know that you and others plan to retun to check on my other HKIFF entries. :)

Hi, YTSL. Saw the full-length version of Carlos at home. There are ways. . .cough, cough. . . of finding films online.

Re: Assayas. Other than Summer Hours (which really is excellent), the only other film of his I have seen is Irma Vep. Starring pre-marriage Maggie Cheung, it's an excellent film about a foreigner who has come to Paris to play a role in a film.

Aaah, yes re how you viewed "Carlos". Me... I really do prefer viewing films on a big screen (and preferably with a well behaved audience)! :D

Still more re Assayas movies: "Irma Vep" was the first of his films that I saw. Thought it amusing but there are many other movies starring Maggie Cheung that I prefer! ;b