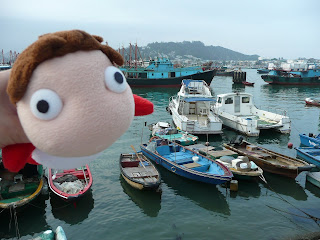 Ponyo... by the sea at Cheung Chau
It all began with a visit to the laundry... Close to two months ago, something calamitous occurred to the Ponyo plush I variously call Stress Ponyo (because I bring her to the office on days that I know will be stressful) and Brunhilde (in honor of my German friend who gave it to me) that almost caused me to burst into tears. For after deciding that she was getting on the dirty side, I took her to be washed... only to discover upon collecting my beloved plush on the stipulated day that the laundry had washed her black pupils off!

Horrified, I pointed this out to the folks at the laundry; the owner of which panicked and kept on saying "sei-lah, sei-lah, sei-lah" (die, die, die!), before agreeing to make her a new pair of eyes. Returning to the laundry a few days to collect my cleaned-up plushie, I was delighted to find that her eyes looked pretty good once again.

That same day, my mother -- who was then visiting -- and I went to Cheung Chau for the day. Having picked up Stress Ponyo before heading off to the ferry, she ended up accompanying us on our excursion. For the most part of the day, I kept her safely stored in my backpack.

But as we strolled about in the latter part of the day, I couldn't resist taking her out and taking a photo of her by the sea... only, as the camera clicked, to almost drop her into the water in shock. Because -- as I'm sure the more observant among you will have noticed -- it turns out that the laundry had also managed to wash off her little red circle of a mouth!!!!!!

Rather than return her to the offending establishment for more repair work, however, I turned to my mother to make Stress Ponyo a new mouth. Which she duly did before she returned to Penang. And yes, it is something for which I'm really grateful... although if truth be told, the red thread my mother used has started to unravel a bit already, with the result that sometimes Stress Ponyo looks like it also can these days be called Snakey Ponyo... ;(

Poor Ponyo! I hope your not stressing too much about her tribulations. Even plushies accumulate the inevitable scars of life. On the positive side, I'm very touched that you are repairing your Ponyo rather than buying a new one.

what a tale, perhaps Ponyo is more stress than you

Aiyee..........Calamitous, calamitous...sounds like a fish entree one would order when visiting Cheung Chau!!

Quelle horreur...pauvre Ponyo with no mouth! Merci pour votre mere...who made her a new one!

But thankfully she's restored and your mother can again repair her mouth on her next visit.

Ponyo looks so cute (even sans mouth) and ready for adventure in your photo.

I've calmed down enough to find humor in -- as well as be philosophical about -- Stress Ponyo's tribulations. And re buying a new one: if I do, it will be an addition to the Ponyo family, not a replacement for any of them!!!

Por quoi re your French infusion? If anything, you should be writing Japanese or German!!! And while I can't hear you laughing, I certainly can imagine... ;D

Cute shot of Ponyo :) And a pretty good shot too; at first glance I thought it was some kind of a tourism promotional picture!

Thanks -- and waaaaah re your having actually thought that the photo my be a tourism promotional picture! ;b

YTSL,
Are you sure no other body parts are missing from poor Ponyo after her trip to that laundry place? : P By the way, Ponyo was my favourite film of 2009, though I don't own any Ponyo toys. : )

*Scream* Don't stress me some more! Seriously though, I *think* the other body parts are intact... and am glad to learn that "Ponyo on the Cliff by the Sea" (the original Japanese dubbed version, I trust) was your favorite movie of 2009. :)

Yep, it was indeed the original version of Ponyo on the Cliff by the Sea that I saw and loved. And that theme song, it's so catchy (“Ponyo Ponyo Ponyo sakana no ko...”). : )

Yay re your having seen and loved the original "Ponyo on the Cliff by the Sea". And yeah... that theme song... would it surprise you to know that I have the original soundtrack CD *and* have heard the little girl sing it live three times? :DDD

Oh no! This must have been shocking! Ponyo is so innocent to have such a tragic thing happen to her. We just saw the movie last week for the first time. It was great. We love the composer - Joe Hisaishi - music. We also like the actors they got for the English version.

Glad you saw Ponyo the movie and loved it. But if you have the opportunity, I strongly recommend that you get the original Japanese dub. At the very least, it'll mean you get to enjoy the original Ponyo theme song -- which I (and many others) adore! :b