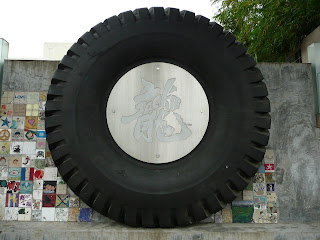 Once upon a time, this large tyre thing marked
the part of Kowloon Tong which was home
to Jackie Chan's professional headquarters 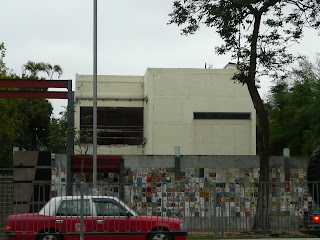 ...but no more -- as can be seen by
the building that used to house the JC Group's offices
looking like it's on the way to being fully demolished
For many people (particularly in the West), Hong Kong cinema's most -- or only -- recognisable face and name belongs to Jackie Chan. And in recognition of this, the Hong Kong Tourism Board appointed him the Big Lychee's tourism ambassador for some years.

But, should you ever come to Hong Kong and talk to the locals, you'll find that the man better known to Cantonese speakers as Sing Lung is more hated than loved by many Hong Kongers. And this even before he shocked people last year with some controversial political statements about Hong Kong, Taiwan and Chinese people in general. (I think I first became aware of people's enmity towards the guy I previously had thought was viewed first and foremost as an Asian action hero around the time of the "Little Dragon Girl" scandal.)

Recently, there has come more confirmation of this with such as Jackie Chan coming dead last out of 80 candidates in a poll of most versus least trusted people in Hong Kong, and his latest film, Little Big Soldier, doing so badly at the box office that in just the second week of its release, I can hardly find any cinemas screening it. In view of this, I wonder whether Jackie saw the writing on the wall some time back and thus decided to move the headquarters of his JC Group from 145 Waterloo Road, Kowloon Tong, to Beijing (as I saw reported over at Hidden Hong Kong (and Macau))?

In any event, it seems that one more familiar landmark -- and building that I think it cool to be able to say that I have been inside -- is no longer. And even though the JC Group will continue to have some presence in Hong Kong (with a local office in Clear Water Bay), it seems like Jackie Chan has decided that his future may well lie outside of the Fragrant Harbour -- and in Mainland China more than the US of A (as he may well have previously hoped).

The word "Waterloo" catched my attention of course because I live in Waterloo. I didn't know anything personal about Jackie Chan, I know him because my son loved to watch his movies and Mr. G. too. I didn't even know that he was born in Hongkong, I thought he was American. sorry !

Interesting and *wow* that you thought Jackie Chan was American. And FWIW, his Hong Kong movies are generally quite a bit better than his American ones.

Just popped up a post with a link to this post. Good insight into how JC has burned his bridges.

I'll be in HK for Filmart and the HKIFF. First staying in Wanchai then spending my last 3 days in Aberdeen for a change as I have been in Central and TST over my past trips. Any suggestions in that hood of things to see? I love exploring with a camera!

Thanks for the link and kind words on your blog about mine.

Re Aberdeen: hmmm... be warned that it's not the most happening part of Hong Kong. The most obvious/touristy thing to do is to go on a sampan tour but if you're into nature, would suggest some hiking/walks in nearby Aberdeen Country Park (though it'd be easier to walk down to Aberdeen from The Peak or Wan Chai Gap rather than the other direction).

Also, you can take a boat from Aberdeen to Po Toi or Lamma islands. And to see one of the most densely populated parts of the world, how about taking a bus to and walking about in neighboring Ap Lei Chau?

I went past here last week on the bus and the whole place is actually being pulled down completely. I was expecting a bit of remodelling but nothing this drastic. Shame about all those hand drawn ceramic tiles on the front wall that people took time to send to him, and yes, of course, what will be done with the tyre?

I pass the place on my way to work each week day. Yeah, I didn't expect something so drastic. And considering his ego, I'm a bit surprised that Jackie Chan didn't think of turning that place into a museum -- especially as the place had so much Jackie Chan paraphenalia about when it functioned as the JC Group's office.