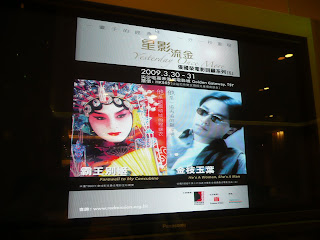 Publicity for one of a number of
Leslie Cheung memorial programmes that take place
around this time of year here in Hong Kong
I'm listening to a Leslie Cheung CD as I write this blog entry. It only seems fitting as this time of year (close to the anniversary of his death), not only do many thoughts turn towards him but it's almost impossible to pass by a video and/or CD store and not see a video featuring him playing or his voice wafting out of it.

Since I already have an entry about viewing He's a Woman. She's a Man (and also Once Upon a Time in China) up on this blog, I'm not going to write some more about those movies. So, instead, I'll write about the following films I viewed for the first time at the still ongoing Hong Kong International Film Festival (whose offerings I'm electing to skip for a change this evening!):-

The Beauty and the Dumb (Hong Kong, 1954)
- From the In The Name of Love: The Films of Evan Yang programme
- Tang Huang, director
- Starring Li Lihua, Liu Enjia, Huang He and Wang Yuen-lung

This 1954 romantic comedy was scripted but not directed by Evan Yang. Neither is it an old Cathay movie. But in many ways, it feels like one -- and not just because the portly Liu Enjia, who graced many a classic Cathay movie, features in the film as the bank clerk who seeks to social climb with the help of his mute but attractive daughter.

Although unquestionably dated, this more than five decade old work charms -- in large part because many of the character actors in the cast are so amusing and its lead, the legendary Li Lihua, is truly charismatic. An actress I had only previously seen acting imperious in movies in which she played such as Empress Wu and other royal and aristocratic personages, she proves equally adept here playing a humble daughter of a white collar worker who is largely consigned to staying at home due to an illness having robbed her of speech (but not hearing).

As luck would have it, however, the mute female gets spotted by -- and wins over the affection of -- the son of the director of her father's bank. Also as luck would have it, her muteness turns out to be curable, albeit only after an operation that costs a lot of money. So no prizes for guessing how it all ends!

Still, however predictable the tale may be, the cinematic package that is the movie is one that entertains after all the years. So much so that I really do feel that those who decide not to view a film just because it's old -- and believe you me, there are many such people, especially in Hong Kong -- really are missing out much on more than they realize.

I knew Talentime's director, Yasmin Ahmad, would be at the HKIFF screening of the film that I elected to attend. That was one attraction of attending that particular screening of this truly -- and unapologetically -- multi-ethnic Malaysian movie. Still, I didn't expect her (and her husband) to decide to sit right in the row behind my two friends who went to watch the work and me. Something which, I have to admit, was kind of distracting -- at least until I got sucked into the the work and its proceedings.

Although Talentime does feature a talent competition, amusing auditions that brought to mine those of He's a Woman, She's a Man and wonderful songs (courtesy of Pete Teo), it's actually more a dramatic work than a straight out musical -- and also is more focused on family and interethnic relations than, say, school shenanigans a la High School Musical. In general, I reckon that this worked out for the best since dramatic examinations of inter-ethnic relations are the director's strong suit. Somewhat surprisingly, however, at least one set of family portrayals in this film came across as too artificial even while two more serious others were as good as I've come to expect of my favorite Malaysian filmmaker.

At the risk of sounding overly critical, it also seemed that Yasmin's comedic touch seemed to have largely eluded her this time around, with much of the comedy coming across as too broad and sit-com to be really effective. Thank goodness, however, for her dramatic sense still being strong and sure. And as the tone went from light to more serious the further along we went in Talentime, the better the film became.

So much so that I sincerely believe that the one viewer who elected to prematurely leave the movie ended up missing the very best parts of the work; sections, not coincidentally, that unashamedly moved me to tears -- and caused me to turn at the end of the film to mouth a "thank you" to its director sitting ever so close to me.

This film, we were warned in advance, was Ann Hui's depresso depiction of Tin Shui Wai, Hong Kong's City of Sadness. As such, I definitely expected something more akin to Lawrence Lau's Besieged City (2008) -- a film that prompted a film friend of mine to say "Slit my wrists now!" as we came out the screening of it! -- than Hui's own The Way We Are (2008).

Based on a true story, this dramatic work centers on a young Mainland Chinese mother of twin daughters who becomes the victim of increasingly violent abuse by her older Hong Konger husband. As she tries to escape the clutches of her spouse, she is damningly let down by her family and those entrusted with seeing to the welfare of people like her over in Hong Kong.

Should it not be clear, I'm not guilty of any spoilers here as the film begins with a murder scene and is then quickly followed by the revelation of the identity of the murder victims. A suspense-thriller this work most emphatically is not. Instead, it is a straight drama; albeit one whose story is told in a non-linear way using such as flashbacks and third person perspectives.

That the movie manages to hold the viewer's attention is a credit to the capable direction of Ann Hui and the acting of the largely no-name -- bar for Simon Yam (who, lest we forget, has played his share of psychos and menacing men along with gigolos and other charmers!) -- cast. Additionally, however familiar and sad, the truth is that the tale is an age-old one that bears re-telling, But, hopefully, its lessons will be taken in by more people this time around.

I really wish I could see The Beauty and the Dumb. I saw Li Lihua in Spoiling the Wedding Day at the HKFA last year, and she was absolutely charming. Like you, I know her mostly through her later roles in the 60s.

And BTW, I have the opposite problem of what you mention inflicts many Hongkongers. Lately, I find myself prejudiced against a film just because it is new. I think I've come down with Paul Fonoroff's Syndrome. (If you've ever read his book of movie reviews, you know what I mean.) The last batch of (Hollywood) trailers that I saw recently made me yearn to go back to the 20th century!

I am anxious to see Night and Fog even if it's depressing. It sounds like it is not quite the same stylistically as The Way We Are -- flashbacks? -- but Ann Hui is a capable director.

And I thought Zhang Jingchu was quite good in The Beast Stalker; I saw Protege and Seven Swords but didn't really notice her in those films.

You came to Hong Kong and went to the HK Film Archive last year? When???

And teehee re your having the opposite film preference from many Hong Kongers. I think I fall in between both viewpoints -- i.e., I think there's both good and bad in old and new!

"Night and Fog" tells a sad tale but I've seen far more depressing films (including at this year's HKIFF). Also, because it doesn't have that happy-happy-then suddenly sad trajectory that has beset more than one Ann Hui movie (e.g., "The Postmodern Life of My Aunt"), I actually find the film much easier to watch and deal with. And yes, it is a good -- I'd even say very good -- film.

Re Zhang Jingchu: wow, she must be quite the chameleon because I didn't connect her with the actress who I previously had seen in all those movies you named! ;S

You came to Hong Kong and went to the HK Film Archive last year? When???

I made a very short trip during the HKIFF to see the Zhu Shilin series. Sorry I didn't look you up!! :$

What Leslie album were you listening to?

Like Glenn I'm looking forward to Ann Hui's 'Night and Fog'. I've read several articles about the area and events that have happened there so am prepared for it being a downer.

'Night and Fog' or 'Besieged City'-which was more depressing? Or is that like comparing apples and oranges?

How does 'Night and Fog' compare with 'Jade, Goddess of Mercy' which haunted me for weeks.

No problem and glad you saw some of the Zhu Shilin movies! Was wondering how long it'd be before you'd get tempted to return to Hong Kong (and the Hong Kong Film Archive)! ;b

Re the Leslie CD query: The answer is that it was the Leslie movie songs CD whose cover looks like this:-
http://store.lesliecheung.com/details.asp?prodid=67&cat=9&path=1,9

Re "Night and Fog": Found it much less traumatizing than "Besieged City" where there seemed scarcely any moment of non-violence to breathe! As for comparing it to "Jade Goddess of Mercy": Find "Night and Fog" to feel more 'real'. All in all, I think that Ann Hui may have been born in what's Mainland China but she most definitely is a Hong Konger -- and it shows in her Hong Kong vis a vis Mainland Chinese films.

Oh, and thanks much for telling me you enjoy reading my reviews. The lack of comments for the previous post got me wondering whether I should write about all the movies I've been watching at the HKIFF but your favorable comment has encouraged me to do so.

Am very interested in getting my hands on The Way We Are. Didn't know about Night and Fog - will have to have this too. Have relatives who moved to TSW from the States so the setting of these films in TSW seems to interest the hubby.

"The Way We Are" is already out on DVD. Highly recommended, truly. Also, don't forget the third Tin Shui Wai film that came out within the past year -- Lawrence Lau's "Besieged City"!