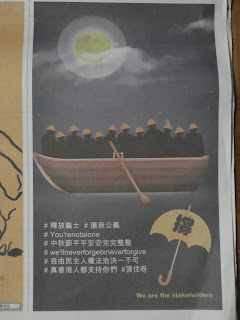 Out of sight but not out of mind 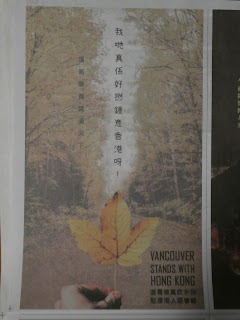 Yes, the world is interconnected...
I went out to what turned out to be quite the marathon dinner -- one which went on for around four hours (and featured way more courses than I'm normally used to) -- with friends yesterday.  There was much chatting while we ate, and the conversation subjects ranged quite a bit in terms of topics but also geography.  Inevitably, we talked about the Wuhan coronavirus (which is ranging far less now in Hong Kong -- which had just four new cases today, two of them imported -- than much of the rest of the world but still continues to prey on our minds).  In contrast to other recent meetups with friends though, security law fears and pro-democracy protests were not touched on much at all.

It's not that the people in the party were not apolitical.  I know at least two of my friends present have long been regular June 4th vigil attendees and also that one of them regularly attended July 1st protest marches (at least prior to this year).
I also don't think that we're experiencing the protest version of quarantine fatigue.  Even so, I must admit that even I spent more time yesterday following the New Zealand elections -- and having a bout of leader envy as a result of seeing New Zealand being blessed with having a leader like Jacinda Ardern -- than checking Hong Kong political news.  (And yes, seeing her win big yesterday made me happy, the way that seeing another popular leader known for right by her people, Tsai Ing Wen, prevail in the Taiwan elections earlier this year did.)
Earlier in the day, I also felt good upon seeing yet another foreign national leader look to do the right thing in the person of Canada's Justin Trudeau pledging to continue to defend human rights in China (including Hong Kong) after China's ambassador to Ottawa issued a threat regarding the “health and security” of the 300,000 Canadians living in Hong Kong earlier this week.  At the same time, it was sad to see Hong Kong referred to in The Guardian's article on the matter as "the theoretically autonomous Chinese territory": quite a far cry from Special Administrative Region (as per its official designation) or even "semi-autonomous region" (as I've seen it referred to more to recently); and a sure sign that much of the world has indeed finally awakened to its plight and altered state/status.
It also felt bittersweet to see Greta Thunberg Tweet her support in recent days for the 12 Hong Kongers who were apprehended by the Mainland Chinese authorities eight weeks ago now and have remained incommunicado with their loved ones as well as in Mainland Chinese custody all this time.  (As in: it's great to have yet another high profile personality's support of Hong Kong's pro-democracy protestors, their plight and their cause -- and, specifically, the ongoing international campaign to save the 12 Hong Kong youths -- but I wish there wasn't that need in the first place, you know?)
Of course, in recent days, the protests that appear to be catching the most attention is not Hong Kong's but Thailand's.  And while some might think that Hong Kong pro-democracy advocates already have a lot on their hands with regards to the battles to be fought in their home territory, many are actually standing up and declaring their support of their Thai counterparts.  On Twitter (which, as a reminder, the new version of Blogger very annoyingly won't let me link to), one can see not only individual "Stand with Thailand" messages from Hong Kongers but also videos and photos showing such a small "Stand with Thailand" display erected in Kennedy Town and "Stand with Thailand" graffiti in Tai Koo Shing.
Some of this was undoubtedly sparked by many Thai protest images (e.g., this and this) bringing to mind Hong Kong ones for many Hong Kongers (as has been the case with many of those from Belarus and the USA in recent months -- and no, it's not a coincidence).  But it's also the case that there's been solidarity among Hong Kong, Thai and Taiwanese pro-democracy advocates for some time now -- with the Milk Tea Alliance being what it's become popularly known as for months now!
Those who think that Hong Kong's pro-democracy protestors have lost might wonder how come their tactics are being adopted by others in far flung parts of the world.  My argument, of course, is that the Hong Kong fight is not yet over.  Yes, the situation in Hong Kong can look pretty bleak, on some days more than others.  But as long as we resist, there's hope.  Ditto when we have the support of others -- abroad as well as at home -- and know we are not alone, and even have the power to inspire (others in the world).
Posted by YTSL at 11:49 PM