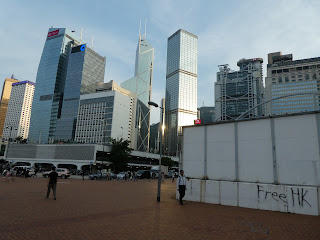 
"Carrie Lam is going to withdraw the bill today!!!!!"  Upon receiving that text message from a journalist friend early yesterday afternoon, I rushed to look online for confirmation.  Early on, when all that was there was just reports that this action would be taken -- rather than actual confirmation of it being the case -- I had the following thoughts:-

1) I'll believe it only when she actually does it.  (Can you blame me since the Hong Kong Chief Executive in Name Only has shown herself to be a serial liar and has spent the past three months or so uttering a whole bunch of nonsense about the extradition bill she stupidly proposed?)

2) Is this a strategy to divide the protesters? (And I know I most definitely was/am not the only one who harbored this suspicion.)

3) If the report is indeed true, it shows that protesting works and the protesting needs to continue.

4) Even if true, more needs to be done -- most notably and imperatively for now, the reining in of the police (whose reputation seems to fall lower and lower by the day through their own actions); and

5) So much still needs to be done but this sure does add to my hope that Hong Kong can get what (good) it deserves and is long overdue.


Also, she had better withdraw the bill now. For one thing, the stock market has reacted so positively to this announcement!
A few hours later, there finally came confirmation of Carrie Lam having at long last announced that she'd formally withdraw the extradition bill which would have allowed the transfer of fugitives to mainland China among other jurisdictions.  And yes, I did allow myself some time to celebrate this development -- because I do believe that it's healthy to celebrate small victories -- even while also totally feeling that the struggle is far from over.

Here's the thing though: If this extradition bill had been formally withdrawn before June 12th, that would have meant that the government had acceded to the one demand of protesters who taken part in three protest marches: the first of which, in late March, had  some 12,000 participants; the second of which, in late April, saw the crowd size increase by a factor of 11; and the third of which, on June 9th, is estimated to have involved some 1 million participants.  But over the course of this summer, people have come to have so many more concerns and demands; thanks in no small part to the continued misconduct of the police and, also, the growing realization that pretty much the whole system is broke.

So what would have felt like a major concession from the government three months ago now merely feels like but the first, way overdue step in what many, many Hong Kongers want to see done.  I'm going to end today's post by quoting at length what a fellow known Snufkin Tweeted because I think it really does lay things out so very well as well as clearly:-