Life goes on during this summer of discontent 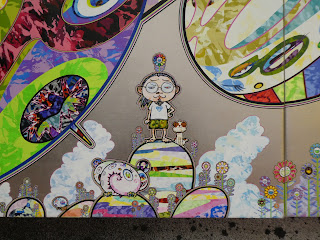 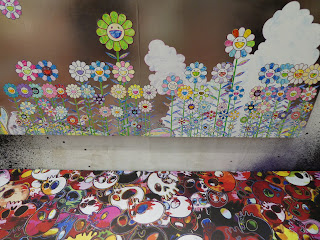 This is undoubtedly because his work consists of
darker images along with smiley, cute ones 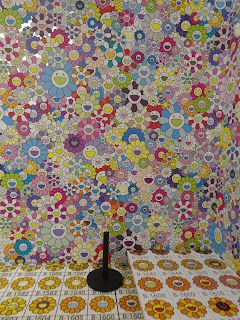 It's also the case that it's hard to come away feeling done
after being surrounded with so much brightness and
so many smiley faces, even they are "only" of flowers!


The past couple of days have not been completely incident-less protest- and politics-wise.  Among the lowlights have been the likes of Executive Council member Fanny Law showing people that there are pro-Beijing politicos who are more idiotic than Carrie Lam, there being disturbed people who can turn violent against the existence of students and school alumni forming human chains and the police confirming that all off-duty officers now are allowed to carry extendable batons.

At the same time though, things have been more peaceful on the streets (and MTR stations -- despite their being paid unnecessary visits by Carrie Lam).  Walking around in various parts of Hong Kong yesterday and today, it sometimes felt like what had happened over the weekend had been but a dream (or terrible nightmare).  Such was the contrast between what I saw at, say, Causeway Bay last night versus what I know happened there the night before.

There are people who may think that I shouldn't have been out and about so much these days even so, that doing so is inviting danger or bad things to happen to me.  To them: I'd say that to do so would be to bow down to one's fears and effectively let the terrorists (in this case, the Hong Kong government and Beijing -- with their threatening propaganda) and scaremongers win.  Consequently, I still am trying to go ahead and continue to enjoy living in Hong Kong amidst all the political upheavals and feelings of discontent that have come out into the open this summer.

The likes of Trevor Noah may have -- disappointingly cowardly as well as unnecessarily, to my mind -- cancelled a show in Hong Kong (that I had got a ticket for months in advance) but there have been other cultural events to go to in this city which is actually still functioning far more than many people outside of it seem to realize.  And while it's also true enough that I've been less in the mood than usual to check out a light hearted comedy or Hong Kong movies with the police or Triad members as the heroes, I've nonetheless done such as taken in film festival screenings of Spike Lee's Do the Right Thing and Mathieu Kassovitz's La Haine, and gone to see Bong Joon Ho's amazing Parasite at the cinema.


To be sure, there are times when I've not been as on the ball with regards to the cultural calendar as usual (and thus ended up missing out on such as this year's Food Expo).  However, I did score some bargains once more at this year's edition of the Hong Kong Book Fair and also remembered to catch the Murakami X Murakami major survey exhibition of the works of Takashi Murakami, one of my favorite contemporary artists in the world, at Tai Kwun just before it finally closed at the beginning of this month.

In addition, after noticing that I was exhibiting signs of depression a couple of months back (namely, feeling bereft of energy and losing my appetite), I've made a point to go out (to catch and channel Hong Kong's vibrant energy) and also regularly treat myself to good food -- sometimes in the company of friends but other times on my own.  And for those who didn't realize: I'm one of those people who is generally fine dining out alone.  Indeed, I sometimes think that when I'm more able to focus on, and appreciate, what I'm eating when I'm dining on my own than when I'm with company and sometimes end up not actually tasting the food all that much when having a serious conversation with other people at the table!
Posted by YTSL at 9:40 PM