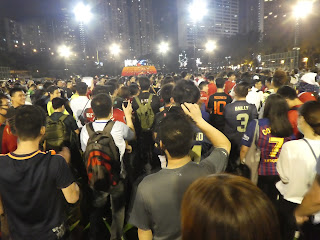 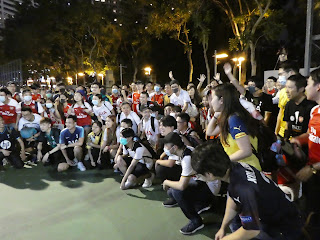 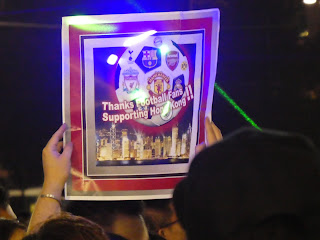 A symbol of the uncommon unity held up like a trophy
(and used to show that laser pointers can't burn it)! :)

China's late paramount leader, Deng Xiaoping, promised that after Britain's handover of Hong Kong to Chinese rule in 1997, “horses will still run, stocks will still sizzle, dancers will still dance."  As it so happened though, the Hong Kong Jockey Club cancelled race night at Happy Valley last night for fear of how people would react to a horse co-owned by hated pro-Beijing legislator Junius Ho (he of the Yuen Long Triad connections and more) being scheduled to compete in a race.

Continuing on the sporting front: News came today that the Professional Golfers' Association (PGA)'s Clearwater Bay Open also will not take place this year while the organizers of the Hong Kong Tennis Open pre-emptively announced last week that this year's edition (originally scheduled to begin on October 7th) would be postponed because of the ongoing pro-democracy protests.  And, as it so happened, the Hong Kong government also announced yesterday that there will be no fireworks display this October 1st (like was the case five years ago and in the aftermath of the 2012 Lamma Island ferry collision).

We can but hope that on the 70th anniversary of the founding of Communist China, more joyous events like the gathering of football fans at Victoria Park last night will be held in Hong Kong instead.  Hundreds of supporters of various teams and clubs obeyed a call put out just a few days ago to assemble in the public space which on each June 4th since 1989 is where a candlelight vigil is held.  We then fanned out to form a human chain that ended up circling all six of Victoria Park's football pitches, with enough hands, legs and bodies (the last clad for the most part in jerseys of favorite football teams) to spare to form an additional line through the middle of the area.

A spirited yet peaceful pro-democracy protest and show of solidarity, it saw club rivalries set aside to show people's collective support for Hong Kong's pro-democracy protests.  Consequently, there came to be such unlikely sights as Arsenal and Tottenham Hotspur fans happily posing for photos together, and experiences involving fans from various clubs good-naturedly singing the anthem associated with Liverpool Football Club (You'll Never Walk Alone) as well as belting out Glory to Hong Kong and chanting "Five demands; not one less"!

Something else that I found interesting was whose names and numbers were the best represented at last night's footballing gathering cum pro-democracy protest.  The most popular current Arsenal players in Hong Kong look to be, expectedly, 2018/19 Arsenal Player of the Season, Alexandre Lacazette, and less expectedly, Uruguayan defensive midfielder Lucas Torreira (more so even than the likes of 2018/19 Premier League Golden Boot Winner, Pierre-Emerick Aubameyang, and German World Cup Winner, Mezut Ozil).  As for past players: I found it gratifying to see that there's still love for Dennis Bergkamp and Tomas Rosicky even while being shocked to not have spotted a single jersey bearing the name of Mr Arsenal himself, Tony Adams! ;b
Posted by YTSL at 11:59 PM