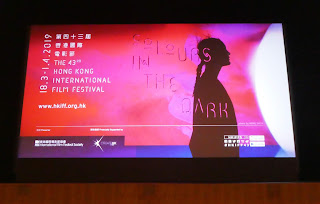 
Director-scriptwriter Barry Jenkins entered into the consciousness of many cinephiles the world over in 2016 with his multiple Oscar winner, Moonlight.  I watched and liked that atmospheric coming-of-age tale of a young, black, gay man growing up in Miami -- not least because of its visual resemblances to more than one Wong Kar Wai movie that I love -- but I actually care more for this follow up offering.


Based on a 1974 novel by James Baldwin (another work of whom's Raul Peck's I Am Not Your Negro was adapted from),  If Beale Street Could Talk revolves around Clementine "Tish" Rivers (Kiki Layne), a young woman seeking -- with the support of her family, including her mother, Sharon (Regina King) -- to clear the name of her sculptor lover, Alonzo "Fonny" Hunt (Stephen James), after he is framed for the rape of another woman (Emily Rios).  A sad socio-political meditation cum lament on what it is to be black in white dominated America as well as a touching period romantic drama largely set in 1970s New York, the film is both emotionally moving and intellectually resonant.


With African American characters at its center and an African American auteur at its helm, it's easy to see why this movie could be characterized as meant for African American audiences.  At the same time though, my own sense is that there's much in it that individuals of other ethnicities can relate to (we are all human, after all).  Also, I'm not sure if it was intentional or just a reflection of real life that, in this film, there can be found characters of more than one ethnicity -- and it's worth noting that it's neither the case that only African Americans are the good guys and gals in this movie, nor that all African Americans in the offering are good people.


On an acting note: Although Regina King it was who was the film's sole honoree at this year's Academy Awards, If Beale Street Could Talk's heart and soul are its young leads.  To my mind, the performances of Kiki Layne and Stephen James overshadows all the others.  And, if truth be told, after seeing this movie, I also am inclined to conclude that Michelle Yeoh was robbed -- because her Crazy Rich Asians' character actually had a more important role to play in that film, and her portrayal of Eleanor Young also was more memorable as far as I'm concerned.

Receiving its world premiere (at last year's Venice International Film Festival) shortly after the 200th anniversary of the Peterloo Massacre that is its subject, Mike Leigh's historical epic begins on the battlefields of Waterloo with a bugler (Pearce Quigley) clearly battle-shocked amidst the carnage taking place around him.  In between that action scene and those of the massacre at Manchester's St Peter's Field that history tells us would occur four years later, there is much talk -- some of it fiery, much of it empty, and lots of it involving bombastic-sounding multi-syllabic words meant to impress more than actually mean something.


A 154-minute-long film with what can appear to be a cast of thousands, Peterloo is a far less intimate work than those I tend to associate with its director-scriptwriter and think are is his best products.  For one thing, it feels considerably more drawn-out than it should have been.  My sense too is that the veteran filmmaker struggled to emotionally connect with the audience even while he did manage to successfully weave together multiple sub-plots and -conversations that all boil down to a major show of terrible social inequality in 19th century England.


It doesn't help matters either that so few of the characters in Peterloo are sympathetic or admirable.  To be sure, it makes sense that many an upper class individual -- from the clownish Prince Regent (Tim McInnerney) to self-important key ministers to callous local magistrates -- would come across as horribly despicable.  But it's also the case that only one of the oppresssed working class characters -- the mother (Maxine Peake) of the young bugler who featured in the first scene -- and the attention-seeking political reformers appeared to have the kind of mind that got me thinking that she was thinking in a mature way and speaking reason for much of the time.


Interestingly, rather than the climactic scene at St Peter's Field (which was filmed in too prosaic a way to feel visceral and induce serious shock), it's other, smaller, arguably more trivial ones in this offering that have more impact.  More specifically, I found the scene involving a women's political meeting to be the most insightful and telling with regards to overall proceedings.  In addition, there's a calm-before-the-storm scene involving three fiddlers making music on the moors that served as a valuable reminder that life is a precious thing, which is why the loss -- and taking away -- of it is no small matter.