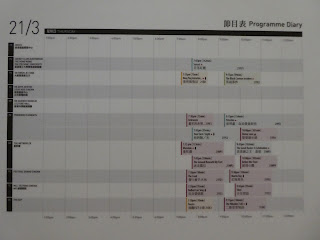 Taking advantage of my not going to a HKIFF screening this evening
-- judging from there being zero sell-out screenings listed for today,
like the majority of other Hong Kongers! ;(


As the end credits rolled at the Hong Kong International Film Festival screening of The Sisters Brothers that I attended, a significant percentage of the audience streamed out of the theater inspite a Q&A with this offering's director having been announced earlier that evening -- and I was among those who chose to do so.  This is not on account of my not having liked the film though.  Rather, it's because I felt like the work was so well made as to have zero loose ends and, consequently, anything I needed any explanations for and/or about!  (Also, the screening had already started later than scheduled as a result of "VIP"s giving speeches that film geeks like myself hadn't really cared for.)


He may hail from the other side of "the pond" and made few, if any, movies that would get people thinking that he'd be eminently suited to helm a film set in the wild, wild West of 19th century U.S.A. -- but Jacques Audiard (whose Deephan, Rust and Bones, and A Prophet I had previously viewed) looks to have taken like a duck to water to a cinematic genre hitherto best left to Hollywood filmmakers; one whose titular characters are a couple of notorious guns for hire (particularly, it seems, by a character known as The Commodore essayed by Rutger Hauer).


John C. Reilly may be the least famous and handsome of the offering's quartet of main stars but his character is the moral anchor of this film; this even though Eli Sisters and his more charismatic -- but also more emotionally unstable -- brother Charlie (Joaquin Phoenix) kill people for a living, and sometimes torture folks to extract the required information too.  A good part of The Sisters Brothers involves them being assigned to get hold of -- with the help of a private detective by the name of John Morris (Jake Gyllenhaal) -- and torture, if needed, a gold prospector named Hermitt Kerman Warm (Riz Ahmed) with a secret formula in his head and utopian dreams besides.


The usual elements one associates with classic Westerns -- including hardened frontier men and hard-ridden horses, frontier boom towns with their bars serving whisky and full of prostitutes, and miles and miles of territory that's both scenic and rugged -- can be found in The Sisters Brothers.  So too are a dramatically involving story that explains how essentially good men can go down bad roads, a morality tale in which greed gets punished, and emotionally compelling tales of fraternity between biologically unrelated men as well as actual brothers.


Those who tastes run towards the more conventional may find The Sisters Brothers too quirky for their tastes.  For my part, I love that this revisionist Western often plays with and defies conventions even while tipping its hat to many of the genre's tropes -- and infuses its story and main characters with a rare humanity that makes them sympathetic and even ones you might wish to root for against the odds.


The Trial (The Netherlands, 2018)
- From the HKIFF's Masters & Auteurs program
- Sergey Loznitsa, director

Born in what's now Belarus when the USSR still existed, Ukrainian director Sergei Loznitsa has drawn on Soviet-era Russian archival footage to make a number of films.  For his latest documentary work, he found and made use of unique footage of an 11-day Stalin-era show trial that was shot from beginning to end with sound.

Editing the footage of the so-called 1930 Industry Party Trial down to approximately down to the length of a regular feature film, Loznitsa sought to give his offering's audience "a chance to spend two hours in the USSR in 1930"; withholding any commentary on his part until very close to the end (and even then, this just involves providing details in a stark manner of the fates of the key men involved in this show trial that actually was far more show than trial).  I guess he felt that what he sought to show would be able to stand on its own and prove revealing, even revelatory, to its audience.

Especially for those who aren't particularly well versed in the workings of the Soviet Union circa 1930, The Trial presents lots of surprises as well as arcane details that actually can perplex far more than inform.  For one thing, it seemed strange that there was a trial held at all since everyone of the eight accused men -- all of them trained engineers and/or university professors -- readily pleaded guilty in court to what they had been charged with: sabotaging Soviet industrial development and plotting against the country's government.  And this even though, it is made pretty clear soon enough, the state prosecutor -- and the people, represented by nightly mobs, assembled even during snowy conditions -- were demanding that every one of the men -- who ranged in age from 39 to 66 years -- be given the death penalty.

The fact that the overall tone of the proceedings was bureaucratic rather than emotional, never mind histrionic, in nature also wasn't something I entirely expected; again, because we were after all dealing with life or death situations.  In retrospect though, I guess it was this way since the accused, the prosecutors and the appointed court officials  -- were all putting a show for the assembled audience of in the iconic Column Hall in Moscow that had a seating capacity of over a thousand.

On a not unrelated note: throughout much of the exhaustive -- if not exhausting -- proceedings, there are signs that all is not as they seemed.  Some of these signs are so obvious that they could prompt laughter in other circumstances.  The tragedy though is that what is captured in The Trial, however farcical, actually had grave consequences and turned out to be the precursor for a number of show trials staged in the years thereafter.

I didn't like The Sisters Brothers.... shows where differences of opinions lay.

I mentioned in my review of "The Sisters Brothers" that I realized it's not for everyone. This being said I think it's an interesting and intelligent effort, and I way prefer it to other recent revisitionist takes on the Western like, say, Quentin Tarantino's "Django Unchained" and also prefer it to many conventional/old school Westerns.