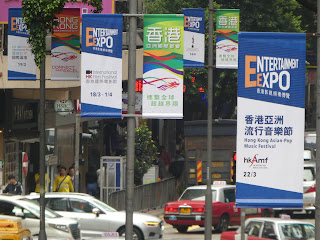 For their latest documentary offering (which was shot on a wide range of locations in six out of the Earth's seven continents), Baichwal and Burtynsky are joined at the helm by Nicholas de Pencier, who also served as ANTHROPOCENE: The Human Epoch's cinematographer, producer and co-executive producer (with Burtynsky among others).  And I think the addition of a third director underlines this latest film's increased ambition as well as ensured a greater complexity and intellectual depth to its treatment of its subject: the indelible marks that modern humans have left on the face of a 4.5 billion-year-old planet despite having been around for just around 10,000 years or so.
Many of the ANTHROPOCENE: The Human Epoch's visuals are truly stunning and spectacular.  Some look like they came out of a science fiction movie (I think this particularly of the scenes with the excavators at the open pit coal mine in Hambach, Germany.)  Quite a few are aesthetically beautiful even while being intellectually disturbing (such as the results of potash mining in Russia).  But there also are absolutely heart-breaking images of a veritable hell on earth (notably the Dandora landfill in Kenya that's Africa's largest garbage dump which poor people and large wild birds spend time in trying to find things value amidst all the trash).
The emotional impact of all these arresting visuals is undoubtedly strengthened when viewing them on a big screen, like I was able to.  But the intellectual messages of the film should be devastatingly clear even if you watched it on such as a small screen mounted on the seat of a plane: namely, that humans have done terrible things to our planet and it's high time we cared more for the Earth and, also, the dignity as well as fates of its inhabitants.

My rating for this film: 8.5
Our Departures (Japan, 2018)
- From the HKIFF's Fantastic Beats program
- Yasujiro Yoshida, director and scriptwriter
- Starring: Kasumi Arimura, Ryusei Kiyama, Jun Kunimura
Made 10 years after the similarly named Departures (which went on to win the 2009 Best Foreign Language Film Oscar), Our Departures is yet another Japanese movie about two people who move from the big city to more bucolic environs far away from Tokyo.  And like with many of his namesake Yasuijiro Ozu's films, Yasujiro Yoshida's latest offering possesses a mix of gentle humor and warm humanity that will give one a feeling that, even while life can never be all peaches and cream, there still actually is much that's right with a world in which people care for others.
After the death of a beloved family member, Akira Okuzuno (Kasumi Arimura) and Shunya Okuzuno (Ryusei Kiyama) journey from Tokyo to the Kagoshima home of Setsuo Okuzono (Jun Kunimura).  Setsuo is the 59-year-old widower father of Akira's late husband and Shunya's late father -- and while 25-year-old Akira and primary school age Shunya appear like mother and son, they actually aren't biological related (and Shunya's mother died shortly after giving birth to him).
All this means that the trio make for an unconventional family unit after Akira and Shunya move into Setsuo's home.  Also unconventional is Akira's decision to become a train driver and conductor, like Setsuo, in order to please train-mad Shunya -- who, his grandfather is surprised to realize, inherited his love of trains from his father even though the father (Munetaka Aoki) had opted to become an illustrator rather than follow in Setsuo's footsteps and, because of certain life choices, had become enstranged years previously from the stern-looking patriarch.
Despite all this, it's also true enough that much of Our Departures doesn't depart that much from the many a convention established for heartwarming Japanese family dramas. At the same time though, every little twist and turn it makes seems just right and its director cum scriptwriter truly was able to move me in ways that made me come out of the screening of the film feeling thoroughly satisfied.  And while you don't have to be a train geek to enjoy the movie, I reckon your pleasure will be exponentially increased if you are a fan of the single or double carriage local trains that still are to be found plying routes in Japan along with the fast and sleek shinkansen. :)